TRANSFORMING HEALTH — The Pennsylvania chapter of the American Academy of Pediatrics is pushing the state Senate to pass a bill making it easier for doctors to know if a patient’s insurance will cover a medication or procedure.

Insurance experts say changes to the bill may be introduced later this month, moving it closer to a vote in the Senate.

At issue is something called “prior authorization.” Before a doctor prescribes a medication or treatment, they have to check whether it will be covered by the patient’s insurance. American Medical Association research has shown that the prior authorization process can cause significant delays in treatment, and may lead to “negative clinical outcomes” for patients.

On average, physicians and their staff spend nearly two days each week getting prior authorization to prescribe treatments, the research states. That time and energy is better spent helping other patients, said Pennsylvania chapter of the American Academy of Pediatrics President Dr. Trude Haecker. 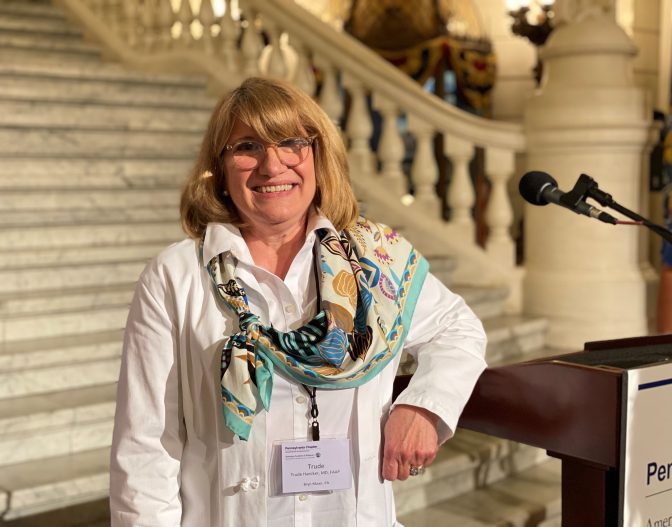 Brett Sholtis / WITF. Dr. Trude Haecker, president of the Pennsylvania chapter of the American Academy of Pediatrics, at the Pa. state capitol June 8, 2022.

For Haecker, a medical director at Children’s Hospital of Philadelphia, those patients are high-risk infants, many of whom were born prematurely and may require medications and potentially costly equipment.

“They may be on very rare medications. They may need home nursing services. And so the prior authorization becomes very difficult for us,” Haecker said.

Republican state Sen. Kristin Phillips-Hill of York County said the bill would remove barriers for doctors by making insurance information more transparent. Among other things, it would require insurers to provide clear guidelines on what they will or won’t cover ahead of time.

Phillips-Hill is the bill’s prime sponsor. With 10 Democrats and 14 Republicans co-sponsoring it, she said she’s confident both parties will come together on the issue.

“Because it’s not a Republican held belief or a Democratic held belief,” Phillips Hill said. “This is just simple common sense.”

Senate GOP leadership “supports this effort to streamline a process that has the ability to provide better outcomes for the public and in this instance patients,” according to Senate Republican Caucus spokesperson Erica Clayton Wright.

“The process in its current form can be slow and tedious and it favors a fail-first model,” Clayton Wright said. “SB 225 can improve patient outcomes and improve efficiency and collaboration between health care providers and insurers.”

The Hospital and Health System Association of Pennsylvania also supports it, “and we remain heavily engaged in continued conversations to get this legislation enacted,” said spokesman Liam Migdail.

Insurance Federation of Pennsylvania President Jonathan Greer declined to say whether health insurers want it to pass, opting to wait until the senate considers an amendment to the bill later this month before making a public statement.

Democratic Gov. Wolf has signaled support for the legislation.

“Ensuring that patients receive medical services in a timely manner is a critical component to ensuring patient access to quality health care,” said Wolf spokeswoman Elizabeth Rementer. “The administration is in discussions with stakeholders and the bill’s sponsor on this legislation.”