Fort Washington Park in northern Manhattan is wedged between the Henry Hudson Parkway and the Hudson river. That may not sound appealing, but it’s an oasis in the Washington Heights neighborhood. Heading up the river on the Greenway on a summer weekend, you’ll pass family barbecues, softball games and people casting their fishing lines into the river, with the George Washington Bridge looming ahead.

Then you’ll come to a curious sight: dozens of people-sized figures of stacked stones spanning well over 100 yards of shoreline. Each figure is made up of three or four stones: a base, middle and a head, all perfectly balanced. They look like a crowd gazing out on the river.

Near the figures you’ll see posted signs: “The Sisyphus Stones.”

When Leonel Mendoza first spotted them on his bike, he had to stop.

“I thought they were natural initially and I just thought, ‘How does this happen? Does the tide bring it in?’” Mendoza says. “It’s cool.”

Neighborhood regulars have grown attached to them too.

“They almost remind me of sort of lost souls. People who have been here but that are now lost,” says Tory Frye.

Another local, Kettani Nabil raves, “It just means humans are fabulous! They can make things out of nothing. ‘Cause I’ve been like coming to this place, years ago, before this was created and there was just like rocks, random rocks. Nothing beautiful about them. Now, you see beauty.”

You might think the piled stones are a sponsored piece of public art. But, no. They were created and maintained by one man: Uliks Gryka, though he tells people they can call him Ulysses. Gryka has spent hours almost every day here, carefully fitting stones together to stand without cement or any other support. 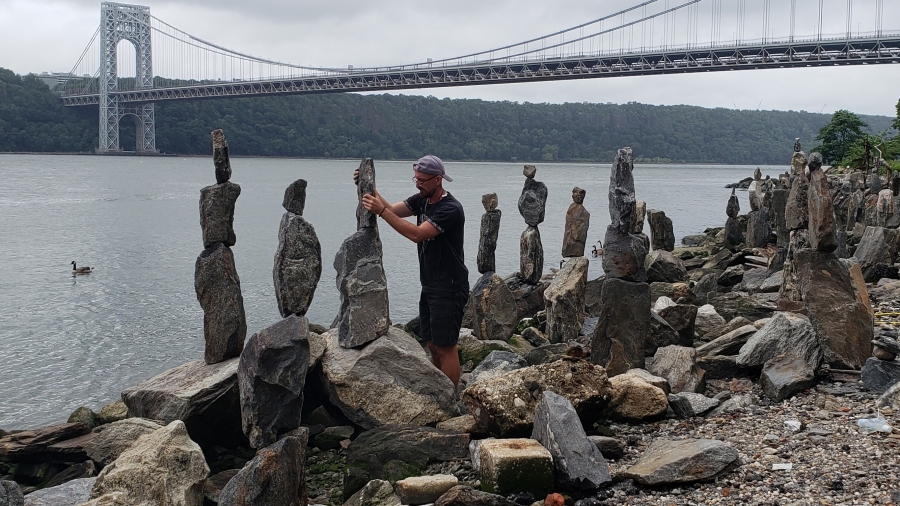 Maxine Daniels, who owns “I Bike Harlem,” has made the stones a regular stop on her bike tours. She tells her tour groups they’ve been dubbed the “Sisyphus Stones” because “folks knocked [them] down 15 times and every single time, he came back up and rebuilt.”

Gryka started last summer. A woman saw him building and thought he was constructing a memorial. “She said ‘thank you for building something like this, because today is Hiroshima,’” he recalls. “That’s how I remember it was the 6th of August, the day I came here in the afternoon around 4 o’clock to build.” 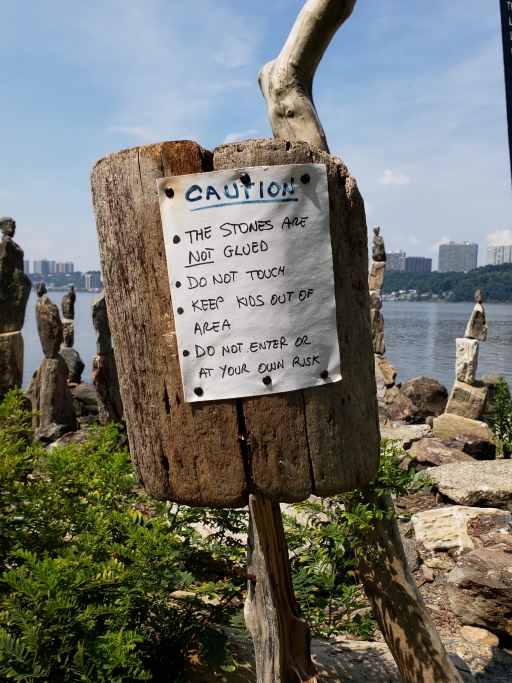 It began as a small personal project, and then kept growing. Gryka would come day after day, to build some new figures, but also to repair those that got toppled — usually by careless selfie-takers. Some people have knocked them down on purpose, but Gryka kept building them. At first, he thought he’d just go as long as the weather allowed. Winter came and he was still building. Why keep going?

Beyond their restorative purpose, the stone structures have become a spiritual exercise. Gryka says they’re part of his practice of Sufism, an Islamic mystical tradition.

“I started writing poetry and then that Sufi poetry brought me to not only speak about the idol with words but also to try to give a tangible form to the idea of idol and I found that in stone,” he says.

The work stops walkers, runners and bikers in their tracks. It invites them to be still like the statues themselves. Gryka says they remind him of different cultures meeting for the first time and freezing to study each other: “At night I would see the stones standing up, they would be the Natives approaching and seeing the ships and being like — silence. Petrified.”

Gryka has navigated different cultures too. Born in Albania, he moved to Italy as a child and came to New York in his mid-20s after winning the green card lottery. He’s been in New York for 10 years and supports himself through a variety of temporary jobs. Creating these stone figures has become his main occupation.

And they’ve gotten a lot of attention. You can find the Sisyphus Stones on Google Maps. They’ve been written up in national newspapers and travel guides. People from all over have seen them on Instagram and Facebook and have built a visit into their New York itineraries.

They’ve also inspired others to create. They appear in blogs and online photo essays. But it’s the community of creators from the neighborhood who are especially passionate about them. Judi Bloch, a retired writer and photographer who plays at the nearby tennis courts, has captured the stones throughout the seasons and amassed thousands of images.

Boris Berlin, a film and music maker who walks his dog there daily, made a short film:

Now Berlin is working on a documentary.

“It’s bringing people together and leading to conversations,” he says. “It’s kind of like a piazza meeting place and you just have a high likelihood of striking up conversations — and intelligent conversations.”

But in the end, Gryka decided to end the project on its one-year anniversary. At first he said he’d level it himself — to leave the place as he’d found it. But as the date neared, he said, “I’ve spoken to many people about the idea, and many people are like ‘You don’t have to do that. Like you literally don’t do it. Because you are going to, that is going to be very violent.’”

So, he decided he’d simply walk away and let nature take its course. 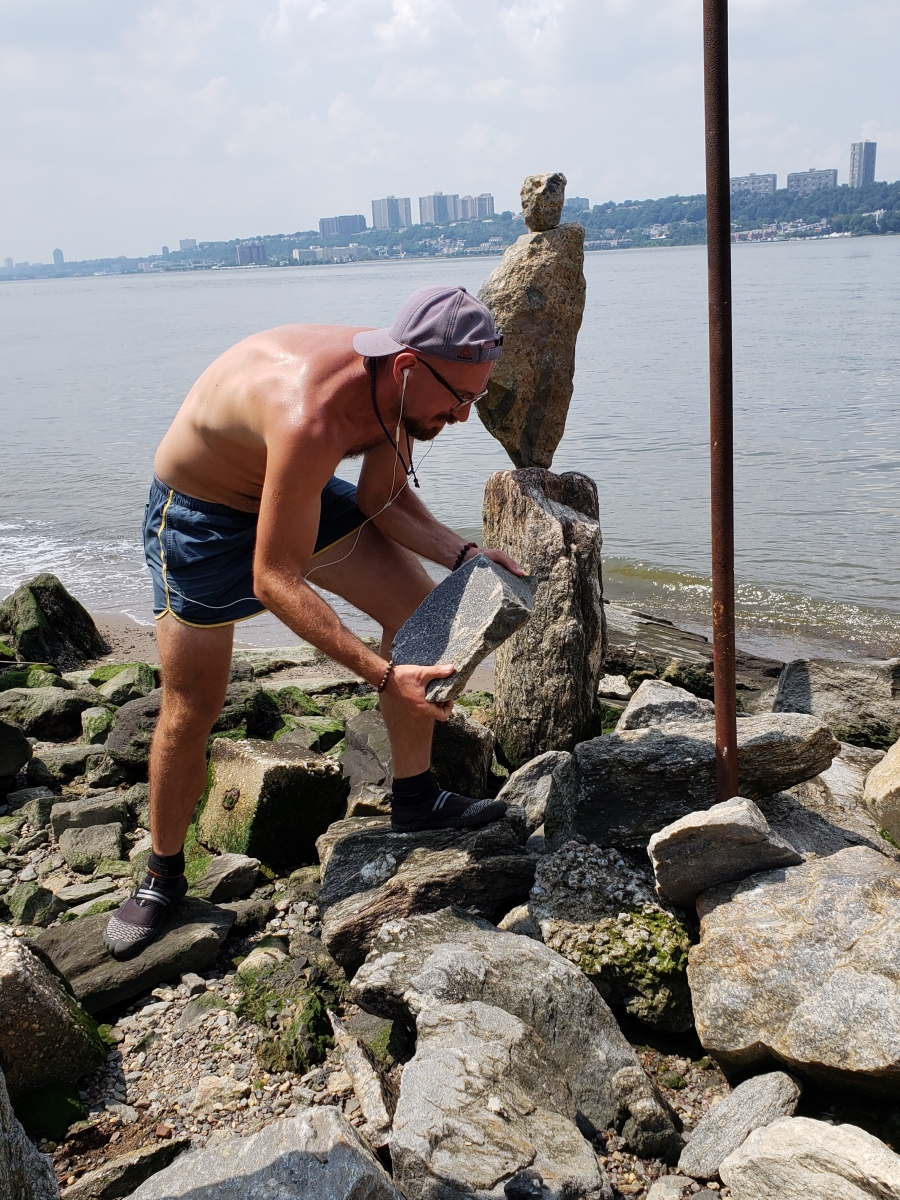 Aug. 6 was a Monday with few people outdoors in the punishing heat. But there was a merciful breeze off the river as Gryka spent his final day with the stones. He built some new figures and adjusted some old ones; he made something with a metal bar he found. He took a lot of pictures on his phone, preserving the memory of the day’s view.

Berlin was there, too, shooting more footage for his documentary. He couldn’t believe Gryka could actually walk away. He said he felt compelled to keep the work going and build some figures himself: “And I’ve also been telling people already that if all of us do that, if all of us erect maybe one statue every day, then it could continue on a maybe, on a smaller scale.”

As of this writing, the stones were still standing, but who knows for how long?