KEYSTONE CROSSROADS — The walls of the Fallaro house are barren.

Gone are the family pictures that once lined the inside of the two-story rowhouse in Kensington. A column of cardboard boxes, already packed, looms in the front corner of the living room.

Mike Fallaro and Lisa Swinehart lost work during the pandemic and have been threatened with eviction from their Kensington rowhouse. Two of their three children are scheduled to start school this week. (Jessica Kourkounis for Keystone Crossroads)

Fallaro and his wife, Lisa Swinehart, are bracing for eviction.

The couple fell behind on the rent this spring after much of Fallaro’s under-the-table work as a repairman dried up and Swinehart lost shifts at a nearby Dunkin’ Donuts, they said. A state moratorium on evictions gave them respite from their $800 monthly rent. But today, the moratorium is set to expire. Their landlord — who recently lambasted them in text messages as “freeloaders” who are “taking advantage of the system” — threatened to evict them in May, according to their attorney.

Fallaro and Swinehart worry about how their three girls, ages 4, 5 and 8, will handle the disruption. The oldest is about to enter third grade at nearby public elementary school, and another daughter is set to start kindergarten. Online school was a struggle for their eldest last spring — and that was without the threat of eviction dangling over the family.

“[It’s] very hard,” said Fallaro. “I think it’s gonna give them some issues.” 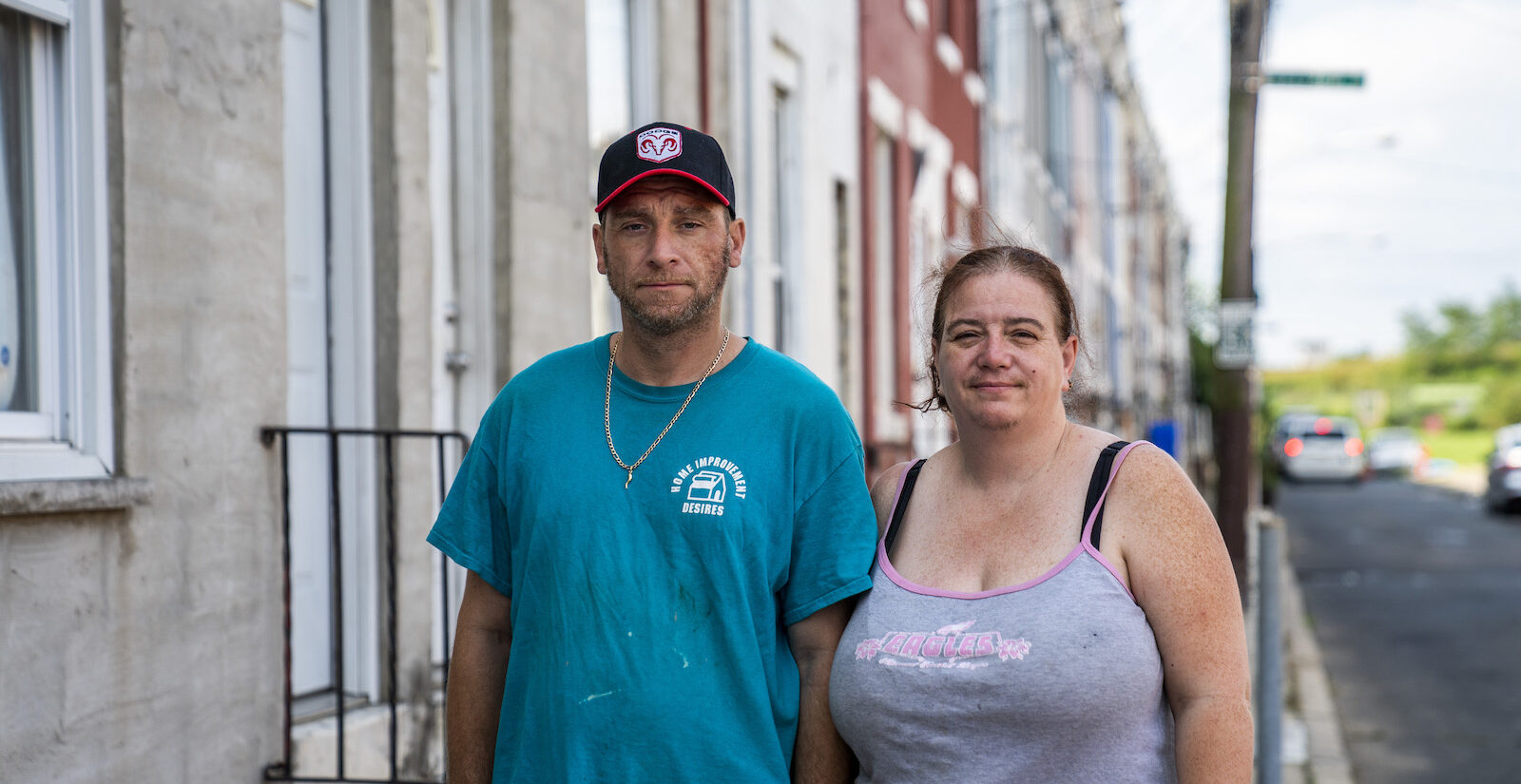 ‘We’re gonna have a deluge’

For families on the financial brink, this fall could be devastating. Advocates predict the end of the moratorium will prompt a wave of evictions as the new school year begins. And with many Pennsylvania schools slated to hold classes online, educators worry about students expected to learn from home while homeless.

“I do worry that if that moratorium is not extended, there could be large numbers [of displaced students] all at once,” said William Hite, superintendent of the School District of Philadelphia.

Philadelphia public schools have already distributed 1,900 Wi-Fi hotspots so that students without stable housing can stay connected to their virtual classes, Hite said. Those devices, however, only make schoolwork possible. They can’t ease the tumult of being displaced through eviction.

“We now have the ability to educate them from wherever,” Hite said. “But we need to make sure ‘wherever’ is a place that is safe, that is supportive, and that can provide shelter for the students and their family.”

Homeless students, research shows, face steep obstacles with schooling. Compared to other low-income students, students without stable housing are apt to fall behind, some studies suggest. Children who switch schools frequently tend to suffer academically and are at greater risk for dropping out, according to research that stretches back decades.

It’s impossible to know how many children will lose their homes in the coming months, but projections are dire. When the coronavirus pandemic took hold in late March and businesses closed, about half of working-age renters said they were struggling to make their monthly payments, according to one poll. By June, according to another survey, about 20% of renters failed to make any rent payments and another 10% managed just a partial payment. One advocate predicted that between 20 million and 28 million people nationally could become homeless this fall.

“It seems that we’re gonna have a deluge,” said Phyllis Chamberlain, executive director of the Housing Alliance of Pennsylvania. “We don’t know how bad it’s gonna be. But we just know it’s gonna be bad.”

A U.S. Census survey indicated that nearly 400,000 Pennsylvanians did not pay rent in July, a potential harbinger of the displacement to come. Families, Chamberlain said, are statistically more likely to be evicted — in part because they have higher housing and living costs. Even those that aren’t ultimately displaced could find it difficult to secure future housing if they end up with eviction notices on their records.

Pennsylvania Gov. Tom Wolf issued a moratorium on all evictions this spring, and later extended it through Aug. 31. That meant landlords could not remove tenants and also couldn’t begin eviction proceedings against renters solely based on their inability to pay rent.

The governor recently announced, however, that he doesn’t have the authority to extend the moratorium further without legislative action.

State Senate Majority Leader Jake Corman, R-Centre, challenged the governor’s logic — as have some legal analysts. Corman argued that Wolf used his emergency powers to impose the original moratorium and continues to use it to enforce other restrictions, such as those on restaurants. He said Republican legislators don’t understand why Wolf no longer feels he can unilaterally enforce an eviction ban that he’s already extended once.

A spokesperson for the governor said there were separate provisions in the emergency powers law, one related to housing and another related to regulatory status. The housing provision is time-limited, the spokesperson said.

Democrats in the State Senate have proposed a plan to extend the eviction moratorium, but it hasn’t gotten any traction in the Republican-controlled chamber.

Either way, it appears the eviction moratorium will expire when September arrives. Landlords — who are still on the hook for property taxes and, in many cases, mortgages — say the housing industry can’t function without eviction or some sort of government relief to substitute for unpaid rent.

To that end, the state does have a new rental assistance program for tenants who have lost income due to the pandemic. That program, however, has been beset by delays and design flaws, including some that make it less attractive for landlords in pricier housing markets to participate.

Mike Fallaro and Lisa Swinehart are among those caught in the bureaucratic snare. The couple applied for relief under the rental assistance program, but their application is still awaiting approval, said Vik Patel, an attorney from Community Legal Services who is representing the couple.

“Their landlord has said as long as it pays out they’re fine, but they still haven’t heard back,” said Patel.

Keystone Crossroads was not able to reach the family’s landlord despite several attempts.

“If you are not well fed, if you do not have a safe space, how can learning possibly occur?” said Philadelphia principal Stephanie Andrewlevich. (Jessica Kourkounis for Keystone Crossroads)

There are some key protections in place for students who lose housing during a school year. The federal McKinney-Vento Act gives students the option to remain in their home schools until their families find permanent housing. It also requires school districts to appoint liaisons to ensure that homeless students have equal access to education.

Schools are also resource hubs for families facing crisis. Stephanie Andrewlevich, principal at S. Weir Mitchell Elementary in Southwest Philadelphia, said her staff is accustomed to helping families who need emergency housing. One of the school’s nonprofit partners makes sure families can find a safe place to stay within 48 hours, if needed.

“If you are not well fed, if you do not have a safe space, how can learning possibly occur?” Andrewlevich said.

Dan Nerelli, superintendent of the Chichester School District in Delaware County, fears it will be more difficult for his staff to suss out which families need help while instruction remains remote. Schools are used to connecting families with emergency resources — but they aren’t used to doing that work online and without the benefit of in-person relationship building.

“We’re very worried about it,” Nerelli said.  “It adds another layer of stress onto all the other layers.” 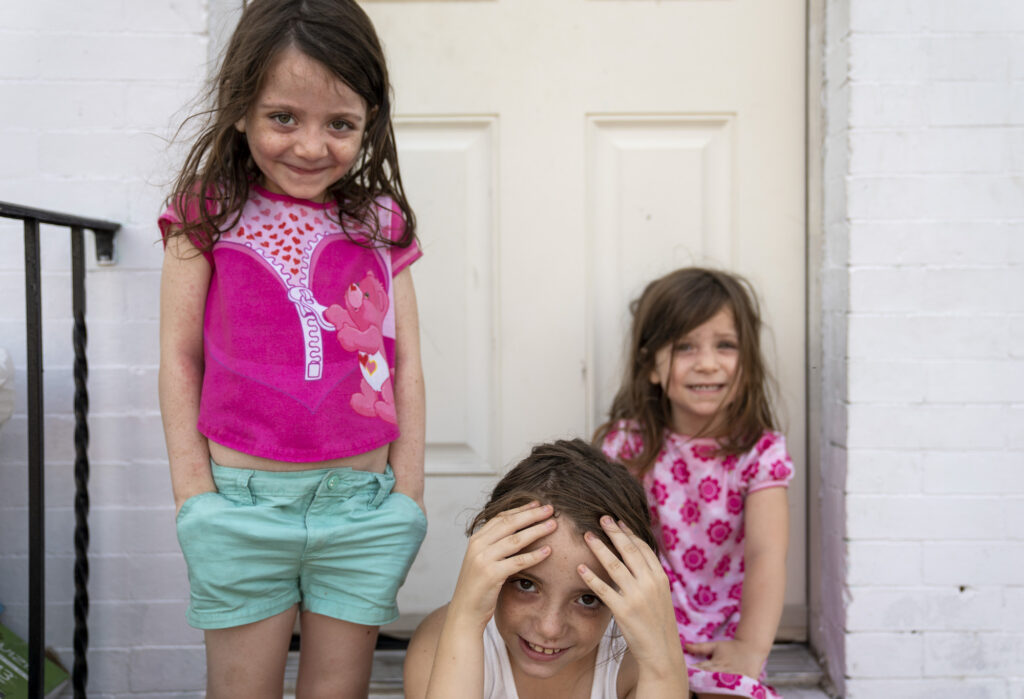 A U.S. Census survey indicated that nearly 400,000 Pennsylvanians did not pay rent in July, a potential harbinger of the displacement to come. Families are statistically more likely to be evicted — in part because they have higher housing and living costs. (Jessica Kourkounis for Keystone Crossroads)

Parents Mike Fallaro and Lisa Swinehart hope their children can stay on track amid the family turbulence. If they lose their house, they plan to move in with one of Fallaro’s cousins who lives nearby.

They pray it won’t come to that. Fallaro’s taking whatever work he can get as a handyman, plastering the neighborhood with flyers for his home repair business.

“But it’s not bringing in what it’s supposed to bring in,” he said.

In his spare time, Fallaro does small projects around the house. Recently he patched and painted all the holes left in the walls after he took down the family’s shelves and pictures.

“Unfortunately our home is not a home no more,” Fallaro said. “It’s just a house.”