KEYSTONE CROSSROADS – In some ways, Rachel Johnson is grateful for Pennsylvania Gov. Tom Wolf’s mid-March business shutdown order: it took the agonizing decision over whether to close the child care center she runs with her husband out of their hands.

A teacher reads to kids at Step by Step School for Early Learning in State College, Pa. (Min Xian/Keystone Crossroads)

“It was sad and scary, but in a way, easy, because the choice was made for us,” said Johnson, 36, who runs Step by Step School for Early Learning in Centre County. “It was like, ‘Ok, we have to close.’ There was nothing to think about.”

Before the pandemic, Step by Step had three locations in the State College area, serving 300 children and employing 65 teachers. The business was able to get a waiver to remain open to serve the children of essential workers, but only 14 of them kept coming, forcing the Johnsons to lay off all but five teachers. The business got a federal Paycheck Protection Program loan, but the couple has struggled to pay their most pressing bills without violating its terms.

They’ve mostly gotten by on savings instead.

On May 8, their fortunes shifted: Centre County was one of the first 24 counties that Gov. Wolf moved into the ‘yellow’ phase of reopening. In that phase more businesses are allowed to open, as well as all child care providers. Thirteen more counties entered this phase on Friday and 12 more will on May 22.

The Johnsons reopened their center May 11, but it wasn’t a simple call. 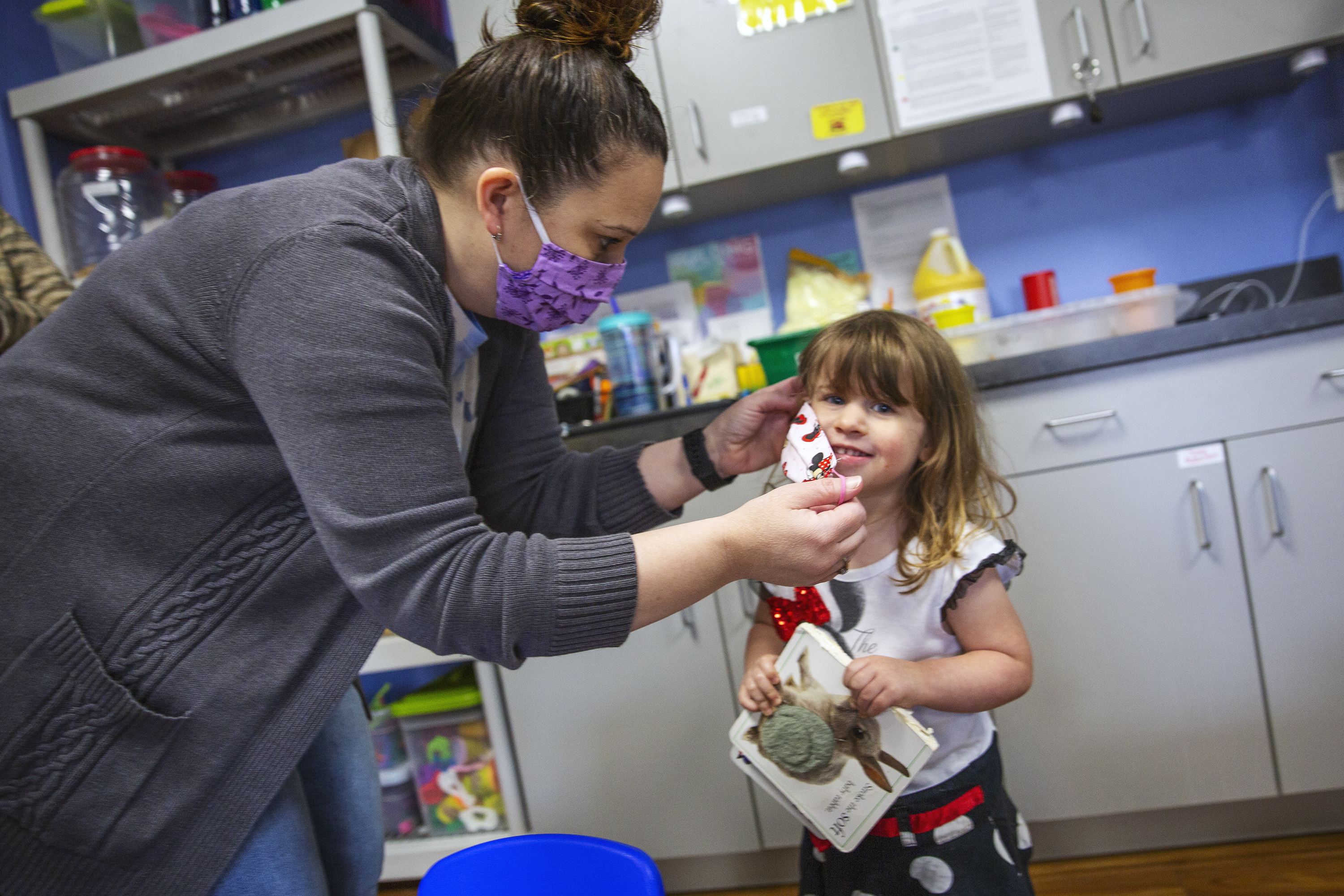 A teacher at at Step by Step School for Early Learning in State College, Pa. puts a mask on a two-year-old. (Min Xian/Keystone Crossroads)

“Our job is to provide [parents] with care so they can go and do their job” said Robert Johnson, Rachel’s husband. “[But] the financial aspect of it, if you would sit there and crunch numbers, it would not be an easy decision.”

The problem is demand: only a few dozen of Step by Step’s kids have returned so far. Most of their parents are still working from home, the Johnsons said, and many are uneasy about sending their kids into any kind of group setting. Meanwhile, the couple is still paying rent, mortgages, and utilities on facilities that can hold many more students. They’ve also rehired twenty of their teachers, allowing for a much smaller a student-to-staff ratio than normal — a costly decision — so the center can maintain small groups and minimize cross-contamination.

All this, Rachel said, has put them in a somewhat uncomfortable position.

“You almost look like the bad guy by trying to convince [parents] to send their kids back,” she said. “Going out there and saying ‘support your local economy’ is going to make you look bad if at the same time you are saying ‘put your kids in danger.’”

As idled businesses begin to restart and more employees return to the job across the state, child care providers in ‘yellow’ counties say they are reopening slowly, if at all. The pace is driven by new safety guidelines, and by nervous parents reluctant to send their kids out of the house. If the industry doesn’t see demand pickup or receive financial aid soon, advocates warn, providers could begin closing for good — possibly slowing the state’s economic recovery.

“Child care is a business, like all of the others that are struggling through this crisis,” said Jen DeBell, executive director of the Pennsylvania Association for the Education of Young Children. “But this business is the one that everyone else relies upon, to make sure families can work.”

‘A lot of them need the money’

Pennsylvania officials opted not to release their own guidance for child care providers reopening — pointing them instead to guidance issued by the Federal Centers for Disease Control.

Those guidelines include emphasizing social distancing, more cleaning and disinfecting, modified pickup and dropoff procedures, and masks on children older than two.

The state’s Office of Child Development and Early Learning (OCDEL) has done a good job communicating these guidelines to child care providers, said Diane Barber, executive director of the Pennsylvania Child Care Association. But she said providers are struggling to find enough supplies to meet them.

“I’ve heard stories of people, you know, on a weekend, making trips to seven different stores before they can find enough supplies to open for a week,” Barber said.

Jolie Clover runs Begin With Us Child Care and Preschool in Blair County. That county moved into ‘yellow’ status on May 15, but Clover says she doesn’t plan to reopen until June, in part due to difficulties finding supplies. 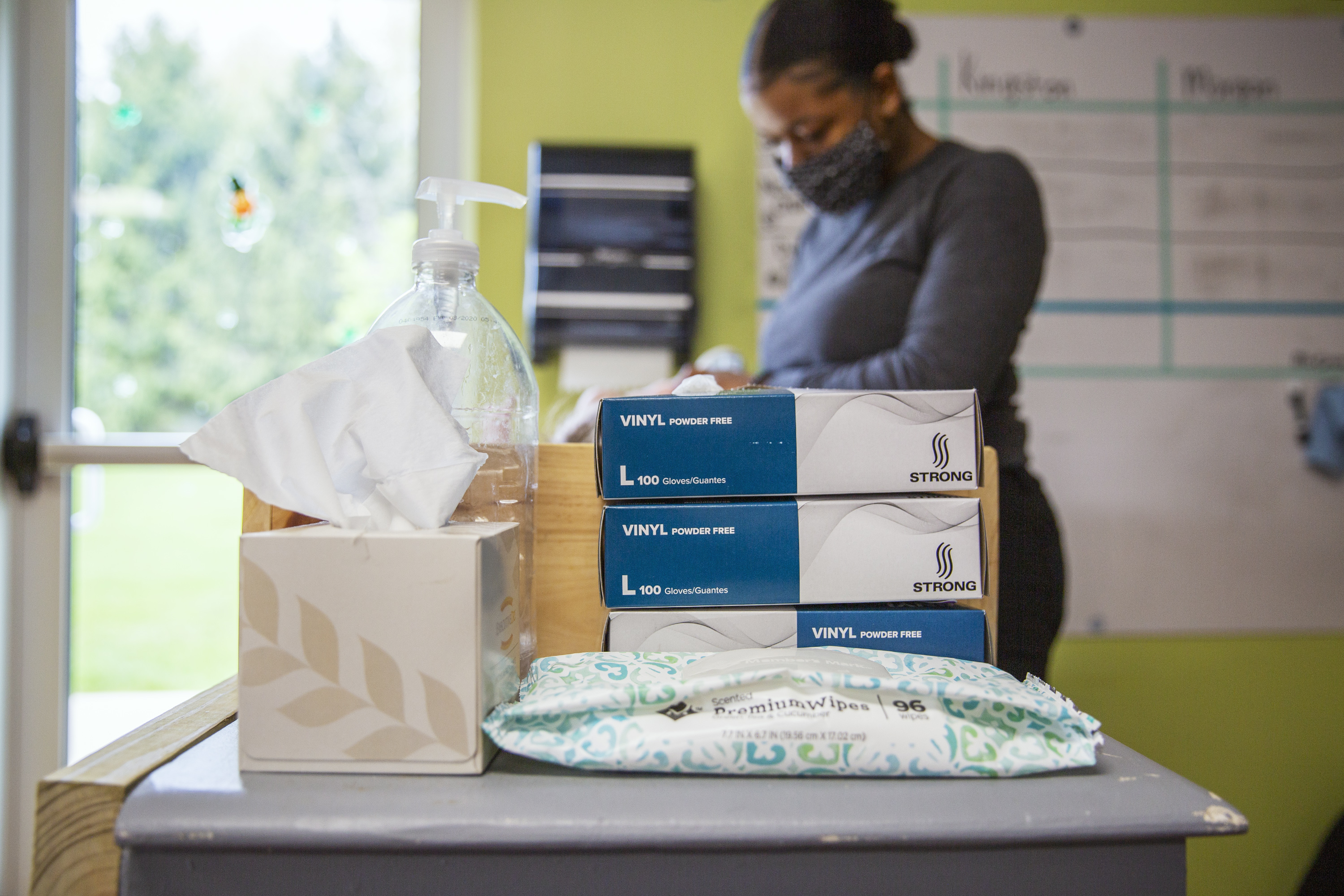 A stack of cleaning and sanitizing supplies in the toddler’s room at Step by Step School for Early Learning in State College, Pa. (Min Xian/Keystone Crossroads)

“It has been very challenging,” Clover said. “We get excited when we put them in our cart online, but then we go to checkout, and we are limited in quantities.”

Pennsylvania received $106 million in federal stimulus funding to support child care in the state through the CARES act. Barber and other industry advocates want Pennsylvania to follow other states’ lead in giving that money to providers to help them purchase supplies, as well as subsidize those with low attendance, or that remain closed. But so far state officials have declined to offer specifics on how or when the money will be spent.

“Those are conversations we are having with the governor’s office and the legislature,” Department of Human Services Secretary Theresa Miller said on a media call last week. “But hopefully we will be able to do that soon.”

Providers in counties that are now reopening don’t have any time to spare, said Jen DeBell: “a lot of them need the money right now.”

While comprehensive data is not yet available, advocates said most child care providers that have reopened are nowhere near capacity.

“All programs are telling us [attendance] is like a quarter, maybe half,” Debell said. “A lot of them … think by July they will be at capacity.”

Harkins is the associate executive director at Early Connections Erie, which served about 300 children a week at six centers across Erie County before the pandemic. 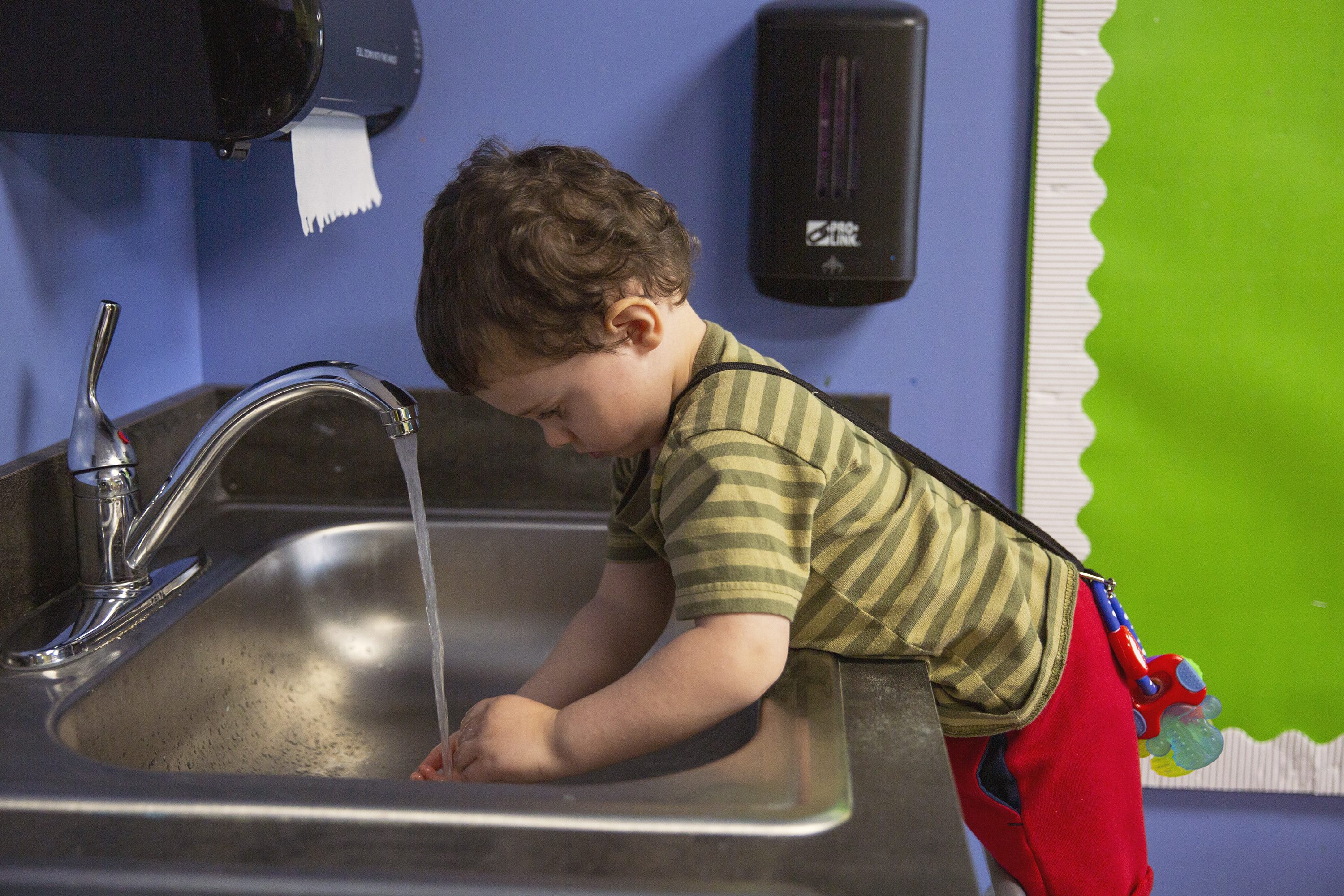 A two-year-old washes his hands at Step by Step School for Early Learning in State College, Pa. (Min Xian/Keystone Crossroads)

Still, when Early Connections reopened last week, less than 30% of its kids returned.

“It was a lot less than we expected,” said Harkins. “I think the parents are just waiting, holding off. I think they’re scared.”

Rashauna Holman decided to bring her daughter back to the center.

Holman, 30, works as a shift manager at a local convenience store, a position considered essential during the shutdown. When her nine-year-old daughters’ school and then day care shut down in March, the single mother had to scramble.

“I was like OK, how am I going to do this?” Holman said. “I [didn’t] want to put the burden on my father to watch my daughter, but he is all that I have.”

For the last two months her daughter has spent most of her time at Holman’s dad’s house. It was a big ask: Holman’s dad has diabetes, and he also takes care of his wife, who has dementia.

When day care reopened Holman was grateful. But she was also nervous.

“I was kind of scared,” Holman said. “I didn’t know what to think. The teachers: have they been out of the country? Have they been in contact with any family members or anybody who has it?”

Holman said she was relieved to learn there were only a few students in her daughter’s class, and to hear about new hand-washing procedures.

“I am still kind of thinking I may take her out of day care,” Holman said. “I don’t know.”