The board voted 14-5 to authorize the state Department of Environmental Protection to review the petition, which is modeled after California’s cap-and-trade system.

The vote does not mean the state will actually launch the program. Instead, it gives the agency the ability to evaluate the proposal. 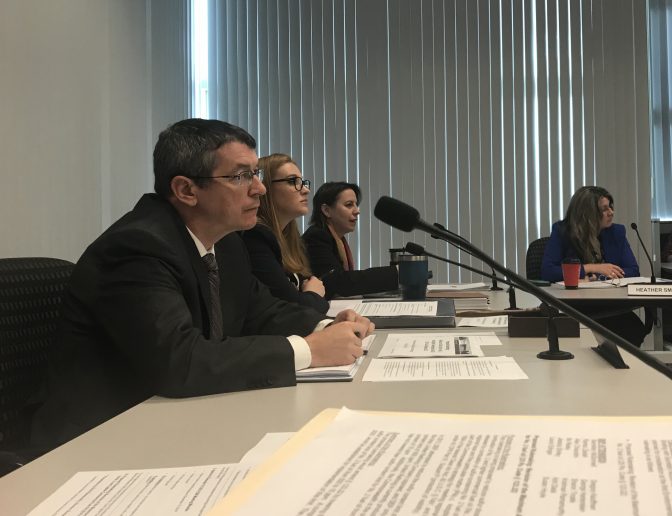 After that review is complete, the DEP will make a recommendation to the Environmental Quality Board (EQB) about whether to adopt, reject, or modify it.

The ramifications of the petition could be politically significant– allowing major climate policy to be implemented without new legislation.

Cap-and-trade is a market-based system that sets a firm, overall limit on emissions. Companies can then buy and sell allowances to pollute certain amounts. California’s program applies to greenhouse gas emissions from the electricity sector, as well as to other major air pollution sources, the import of electricity, and the sale of natural gas, heating oil, and gasoline.

“Time is running out,” Minott said.

His group filed the petition along with 191 other entities—including municipal governments, faith-based organizations, renewable energy companies, and climate researchers.

“This is probably the most cost-effective and efficient program you could implement, that would benefit society,” he said.

The emissions cap would start with a budget, assuming a three percent reduction from 2016. After that, the cap would be reduced by three percent a year and hit net zero by 2052.

The petitioners say their plan will achieve the necessary reductions scientists call for, and they argue Pennsylvania has not only the legal authority, but a constitutional duty, to address climate change. John Dernbach, a prominent legal scholar who directs the Environmental Law and Sustainability Center at Widener University Law School, helped draft the proposal. His research helped to revive Pennsylvania’s Environmental Rights Amendment, which was added to the state constitution in 1971.

“Every citizen of the state of Pennsylvania has an explicit right to a clean environment, that is set out in the constitution,” said Dernbach. “That is the same right as they have to free speech, freedom of worship, and even to bear arms.”

Among states, Pennsylvania is the fourth-largest carbon polluter. Human-caused greenhouse gas emissions have already warmed the planet by nearly one degree Celsius since the pre-industrial era. Scientists are urging global leaders to keep further warming well below 1.5 degrees Celsius to avoid the worst effects of climate change—including extreme weather and food shortages.

A coalition of business groups, including the Pennsylvania Chamber and trade organizations representing oil and gas companies, expressed concern over the petition. In a letter to the board, they urged members to review its implications further before voting.

Rep. Daryl Metcalfe, an EQB member and Republican chair of the House Environmental Resources and Energy Committee, recently hosted a hearing to debunk “myths,” featuring a speaker who doubts mainstream climate science. Metcalfe thinks the cap-and-trade proposal is designed circumvent the legislature. He made a motion to table it, which was rejected by the board.

“It’s an affront to the General Assembly,” Metcalfe said of the petition. “I don’t think there’s any evidence this regulation reshaping the economy would have any measurable impact on the climate.”

Governor Tom Wolf, a Democrat, has called climate change one of the biggest issues facing the state. He issued an executive order in January calling on the state to cut emissions 80 percent from 2005 levels by 2050.

The cap-and-trade petition could allow his administration to implement climate policy through the executive branch, largely bypassing the Republican-led legislature. DEP is expected to inform the EQB about how it intends to evaluate the petition at its next meeting on June 18.