In the video, a woman with long wavy hair sits by a window, her profile in shadows. Her name is Lorena and she has a message for the governor of Pennsylvania: “Shut down the Berks Detention Center.” She said she spent 663 days there with her then 3-year-old son and was released in 2017 while seeking asylum.

The video is part of the project “Familias Separadas” created by artist Michelle Angela Ortiz to amplify the voices of asylum-seeking families in detention.

Women who have been detained at Berks sometimes choose to remain anonymous because they worry that speaking out could affect their asylum cases or fear retaliation toward the families they left behind in their home countries. Lately, they have been relying on artists and advocates to help their voices be heard. 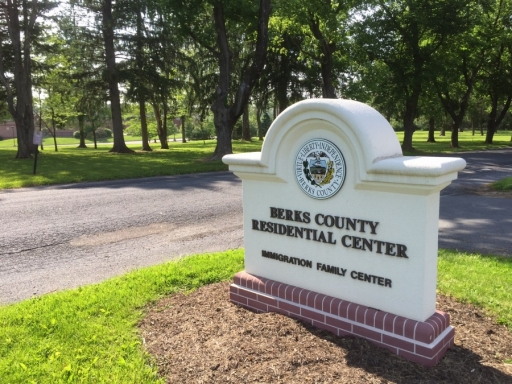 Twenty-two women who were being held at Berks County Residential Residential Center started a hunger strike on Aug. 8, 2016. They asked to be released from detention as their cases for asylum move through the courts. Credit: Valeria Fernández/PRI

For years, these women, often having already experienced gang and domestic violence in Guatemala, Honduras or El Salvador, have denounced their treatment at the center. They’ve chronicled sexual assault and abuse of mothers, including by Berks County Residential Center staff. They have reported medical negligence of children and also described how traumatic it is to be deprived of freedom while seeking asylum. In 2016, detainees staged a hunger strike for their release.

Human rights advocates and immigration attorneys are furious the state hasn’t yet shut down the facility, which they say is breaking the law. The center is running without a state child care license and, they say, has been in violation of a federal court ruling. On July 15, they’ll hold an interfaith vigil outside Berks to draw attention to their cause.

The Berks County Residential Center is 65 miles from Philadelphia, Pennsylvania. It’s the oldest detention center for immigrant families in the country and, unlike the larger detention centers at Dilley and the Karnes in Texas, it’s not operated by private companies. It’s run by Berks County, which has a contract with the federal agency Immigration and Customs Enforcement (ICE).

Calls to shut it down are gaining momentum in part because on July 9 federal Judge Dolly M. Gee rejected a government appeal to ease restrictions on how it detains children. The judge affirmed a decades-old court settlement that immigrant families cannot be locked down for more than 20 days.

But it’s unclear whether the ruling will halt the Trump administration’s efforts to increase its capacity to detain migrant families.

“The reality is that Berks County Detention Center is a model for family detention. It’s what really set the stage for Karnes and Dilley to do what they’re doing now,” says Jasmine Rivera, a member of the Shut Down Berks coalition. “These centers got up and running and continue to operate by breaking the law. So, we’re really concerned that this administration is going to ignore the legal arguments and just do what it wants to do,”

Those who have been detained there in the past say migrants seeking asylum should not be held at Berks.

“It’s unjust that children and mothers, and now fathers, are in that place. Instead of finding protection, what we found is a prison here,” Lorena said in Spanish in the video.

State laws in Pennsylvania ban the practice of locking up children who don’t face criminal charges. Specifically, code 3800 reads: “Secure care is permitted only for children who are alleged delinquent, or adjudicated delinquent and court ordered to a secure facility.”

The migrant children at Berks have not been charged or convicted of crimes, nor has a court ordered their detention. But for years the facility has stayed open and held children on the technicality that both the federal government and the county refuse to recognize it as a “secured facility.”

Joshua G. Reid, an assistant field office director for ICE in Pennsylvania, described the security at Berks to federal court in June 2016 this way: “There are no physical impediments to a resident departing the facility. If a resident were to leave BFRC [Berks] without authorization, however, they would be considered a fugitive and subsequently may be arrested by ICE officers, depending on the circumstances of their departure and their individual case.”

Activists from the Shut Down Berks Coalition say state officials are turning a blind eye while laws are being broken. They call for Pennsylvania Governor Tom Wolf to issue an emergency order for the release of the families detained there.

“It is a legal black hole where ICE, Berks County and Governor Wolf have decided that the laws don’t apply,” says David Bennion, executive director of the immigrant advocacy group Free Migration Project and an immigration attorney. “Immigrant children deserve to be protected under the law the same as anyone. We know why President Trump wants to imprison and deport immigrant children into harm’s way, but why is Governor Wolf enabling and supporting Trump by allowing family detention to continue in his state?”

Legal experts argue that families need not be released from immigration custody entirely, they just need to be let out of Berks. In the past, when detainees were released from family detention, many were placed into alternative supervision programs that have included bond payments, ankle monitors or check-ins with immigration authorities as conditions for release. Other options include release to community-based organizations and sponsors.

In 2016, the Pennsylvania Department of Human Services revoked and refused to renew Berk’s license to operate as a child residential facility because it is operating as a family immigration detention center with adults.

The county appealed to get the license back. In the meantime, it’s allowed to operate.

Human Services told PRI that the governor has taken action by urging Trump to reconsider the detention of families who are awaiting immigration hearings.

“Governor Wolf has already attempted to revoke the license from the Berks County Residential Center (BCRC), but regardless of any action the state takes, the federal government will continue to operate this facility because the center is run by Berks County in a direct contract with the federal government,” the department said in an emailed statement to PRI. They said the facility is not violating code 3800 because it “does not meet the regulatory definition of ‘secure care'” because exiting the building is not barred by locks or “secure fencing.”

Attorneys petitioned the department to consider the testimonies of families held at Berks as evidence in the appeal, but were denied on July 3. The administrative law judge handling the case is expected to issue a decision in the coming months about the license. The petition lists a number of instances in which children were denied appropriate medical care and mental health services. Some cases were also documented by media, Human Rights First and immigration attorneys. The Department of Human Services maintains that Berks conducts mental health screenings for every child brought to the facility, and conducts follow-up screenings and monitoring as needed.

In 2016, PRI visited the facility and interviewed two women who talked about the mental health impacts of detention on their children and themselves. Women reported not feeling comfortable talking to the on-site therapists, and children as young as 5 said they were afraid of the fire drill alarms and check-ins conducted by security guards who shined flashlights into their rooms several times a night. Some young children were held in these controlled conditions for six months to several years.

“The Department of Human Services cannot issue an Emergency Removal Order (ERO) unless it finds misconduct by the facility that causes immediate and serious danger to the life or health of the children. DHS conducts regular unannounced inspections and has not found grounds for an ERO. Further, Berks County and the federal government have said that they would continue to operate the facility even without a state license,” the department said in its statement.

Records of inspections reports from 2013 to 2017 document the types of violations they have recorded at Berks. For example, in August 2017 they found that the facility was giving children medical treatment without the signed consent of parents. At the time, Berks was detaining 32 children, 12 of whom were under 5.

Bennion says Human Services has intervened in the past for more minor violations.

In 2010, they removed children from a daycare center that “was not adequately caring for the children under its supervision,” according to a 2016 report about the measures the state could take to intervene sent to advocates by a law clinic at the Temple University Beasley School of Law.

“Unless there’s something happening literally in front of the inspectors, they’re refusing to take action, and that’s not reasonable,” says Bennion. “What we fear — and we’ve feared this for a long time — is that it’s going to take a child dying at this facility. Even that might not be enough for this governor.”

Pennsylvania Attorney General Josh Shapiro did not respond to PRI’s request for comment, but he has been outspoken about the Trump administration’s policies that have led to families being separated at the southern border. In June, Pennsylvania joined 16 other states in a lawsuit to end the practice. As the government tries to meet court-ordered deadlines for reuniting families, family detention as another option for keeping migrants detained looms.

Berks County commissioners said at a public meeting in June (minute 35) that to their knowledge there are only fathers and their male and female children, all asylum-seekers, at the Berks County Residential Facility. Commissioner Mark C. Scott said that the county’s legal battle for licensing, to stay open, “enabled those children to remain with their parents.”

Commissioner Christian Y. Leinbach said that the facility is “better than home conditions that many people experience in Berks County. … When I hear people say that we are harming children, hurting families at the BCRC, nothing could be further from the truth.”

The commissioners referred PRI’s request for an interview to the solicitor general, their attorney, Christine Sadler.

Sadler said that the center underwent renovations of its fourth floor over a year ago and it told ICE about the expansion. The renovated floor, which is not currently in use, includes housing and facilities such as showers. She would not say how many more people could possibly be detained at Berks, but said that the expansion was unrelated to current issues of children who have been separated from their parents at the border. She wouldn’t comment further on the status of the pending appeal for Berks’ license so as not to jeopardize pending litigation.

ICE told PRI that the renovated fourth floor is not currently being used for detention.

In October 2016, two attorneys representing women and children at the Berks County Residential Center recounted at a commissioner’s meeting (minute 36) complaints from their clients at the facility as well as their concerns about family detention happening in their community. Commissioner Kevin Barnhardt said then that the facility had been run for 15 years without controversy and with frequent inspections. He said that the attorneys were spreading falsehoods and accused them of profiting from their pro bono representation of detainees.

“If you think for one minute I would oversee a facility that would be abusive toward people, then you don’t know me as well as everyone else does in the community,” Barnhardt said.

With additional reporting by Monica Campbell.