(McAdoo) — For many of the families who attend St. Mary’s Ukrainian Catholic Church, the liturgical services connect them with the same faith traditions as their ancestors, who came to Schuylkill County around the turn of the 20th Century.

Father Roman Oliinyk’s connection to Ukraine is not just to ancestors, but to family and friends who are under attack.

witf · From Schuylkill County, prayers for Ukraine. From Ukraine, pleas for support

The priest, his wife and five children came to Pennsylvania just a few months ago. At the time, Ukraine was preparing for a possible Russian invasion. Now, war is a day-to-day reality for people he knows in places such as Kyiv.

“It is really tough for those people, when you have to evacuate, when you are in your apartment and you hear that your neighbors got killed,” Oliinyk said. “It’s unimaginable.”

Oliinyk has kept the church open for round-the-clock prayer since Russian forces invaded. Last Saturday afternoon, parishioners joined him to pray the rosary, both in English and Ukrainian.

Using Facebook, the group joined what Oliinyk estimated was tens of thousands of others around the world broadcasting their prayers to the people of Ukraine.

“We are going to ask and pray to the mother of God that she would protect our country, Europe and the whole world, and that the whole world will be united to overcome this evil man, Vladimir Putin,” Oliinyk said. 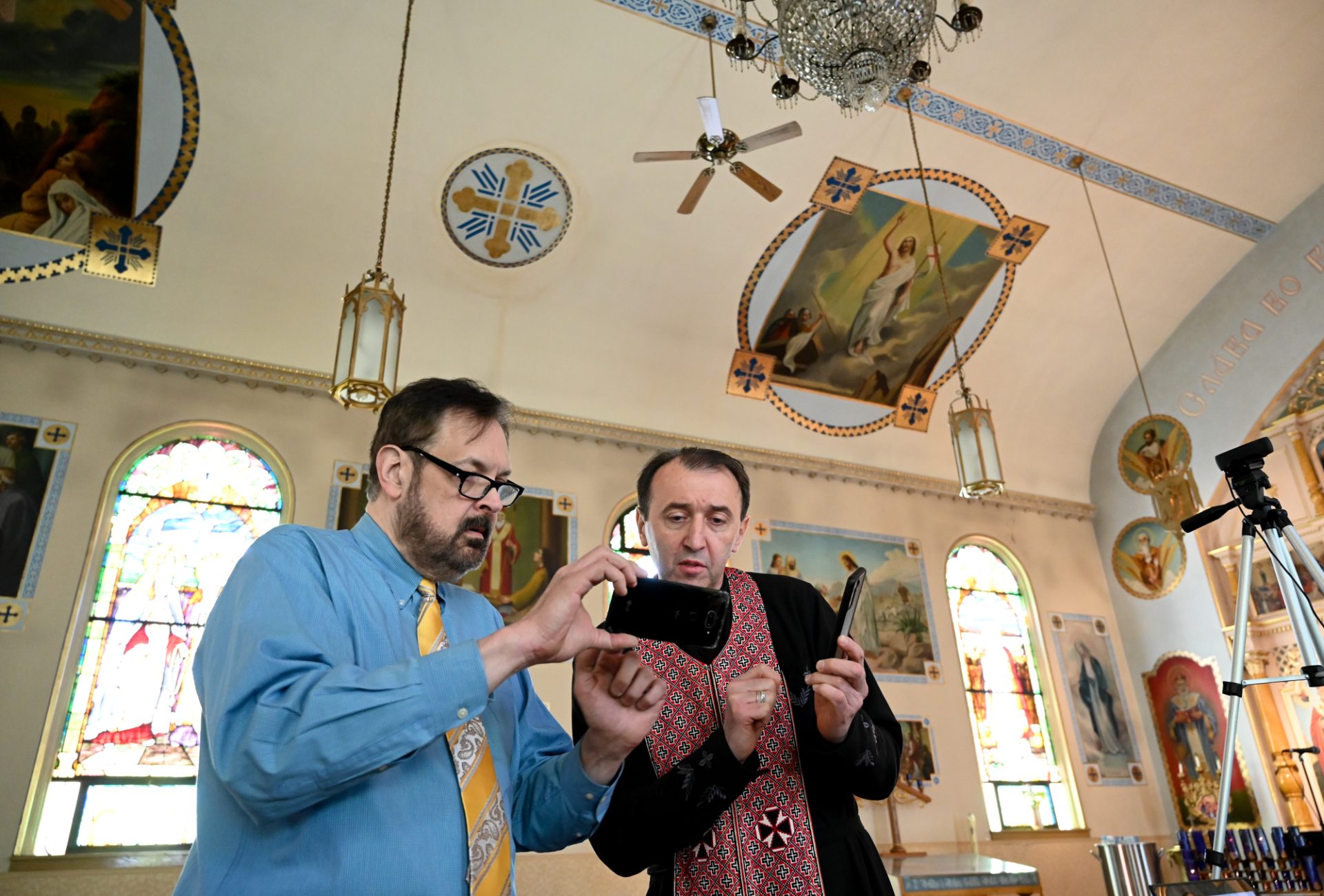 The invasion may be thousands of miles away, but it was close to home for church-goers in Schuylkill County. Census data shows McAdoo has one of the largest percentage Ukrainian-ancestry populations in the U.S.

“When most of the immigrants came over from Ukraine, they settled in Schuylkill County because of the mines and so forth, and they were used to the mines and the farming,” Georgine Postupack-Borchik said.

She was born in the U.S., but the 82-year-old said she grew up with stories of her family in Ukraine having to practice their traditions in secret due to Soviet control. 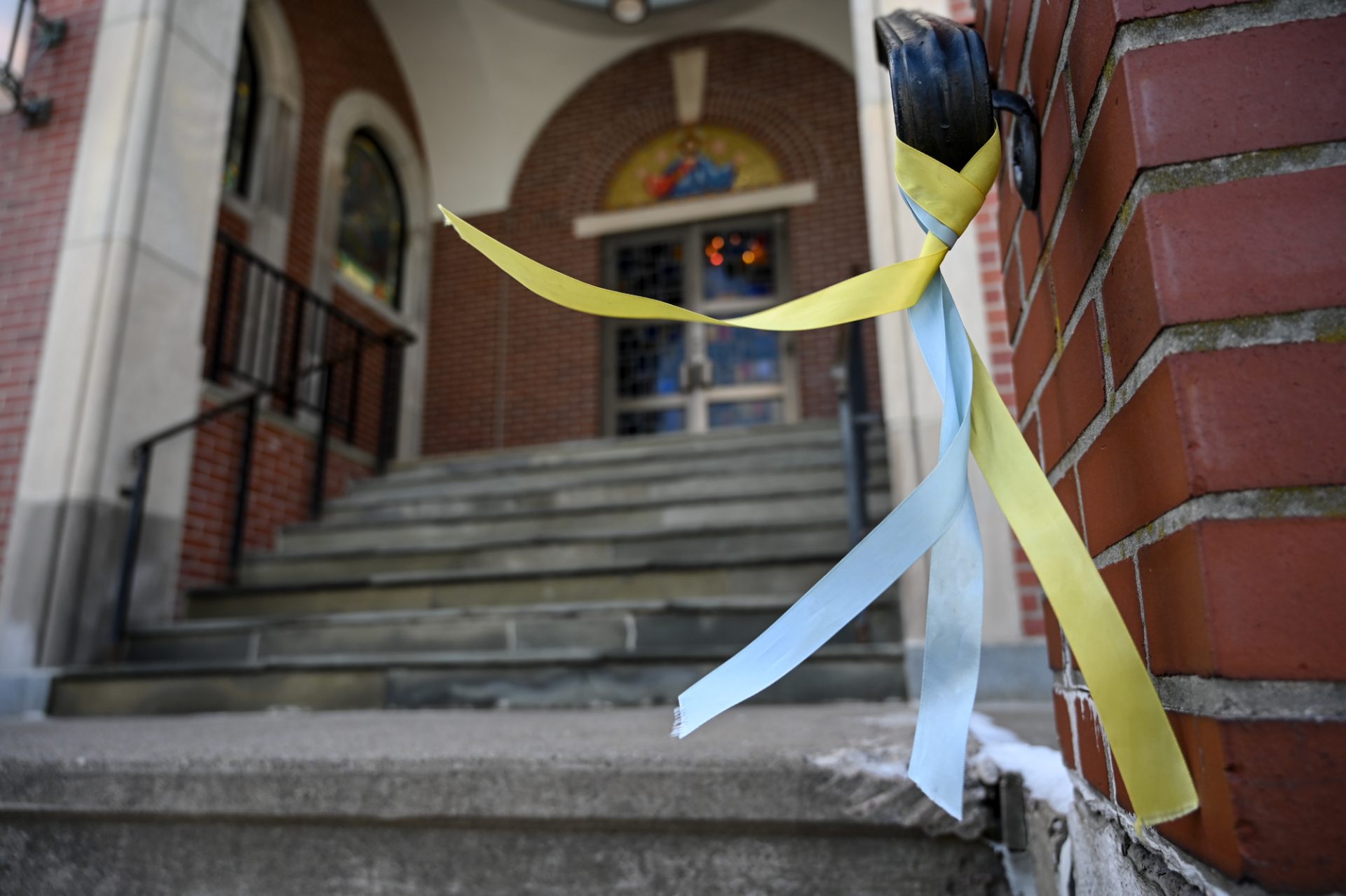 Yellow and blue ribbons, the color of the Ukrainian flag, blow in the wind outside of St. Mary’s Ukrainian-Catholic Church in McAdoo, Schuylkill County. The church participated in a worldwide rosary prayer on Saturday, Feb. 26, 2022.

She said she is praying for her loved ones still in Ukraine.

“My heart was sick,” she said, recounting how she felt when she heard Russia invaded. “Our people were starting to get to know what life was about other than being told what they had to do.”

Lifelong parishioner Joe Krushinsky said he and other descendants of those who founded St. Mary’s in 1891 have not forgotten where they’re from.

“I hope the message is that 130 years later, we still think of you. We are still connected. We are brothers and sons and daughters,” Krushinsky said. Supporting Oliinyk and his family was one way he could show that bond.

Father Oliinyk is from Lviv, in western Ukraine. He said his family in the city is safe, but two of his nephews were preparing to travel east toward Kyiv to fight.

“Yes, I am trying to join the army,” Franchuk said. “All Ukrainians should fight with Russia now. I believe all Ukrainian men will do it.” He said men were lined up around the recruiting station in Lviv. “When I go there, I feel the support of the people. All men want to join.” 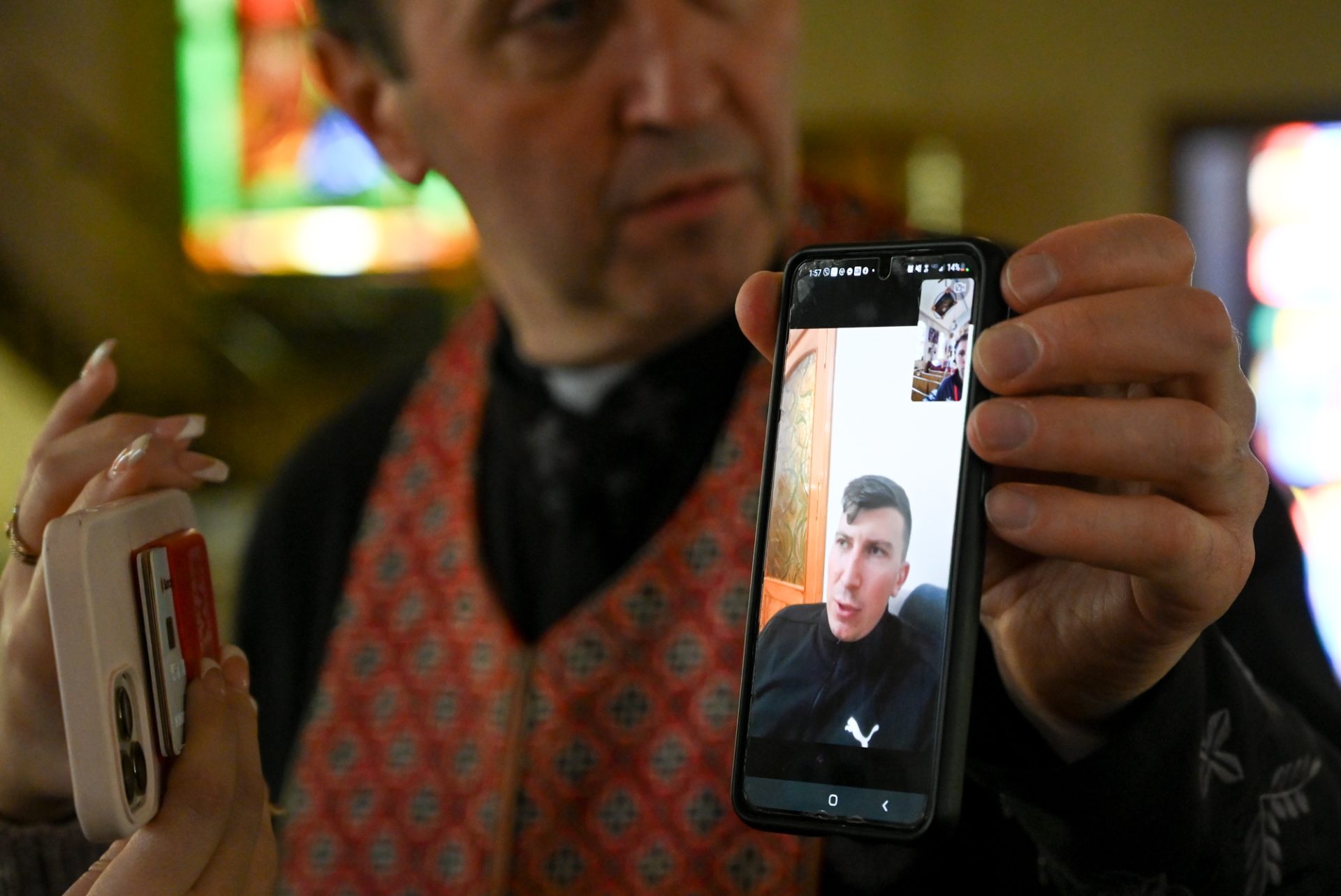 The 28-year-old computer science engineer said he wanted people in the U.S. to understand that Putin’s war threatens democracy not just in Ukraine, but around the globe.

“So I ask you guys, just normal people, to push your government to make more sanctions on Russia,” Franchuk said. “To make everything that’s possible to help us with more weapons. We need more weapons.”

In the days since the virtual  conversation, the U.S. and the world have responded. Countries have provided anti-tank and anti-aircraft rockets to Ukraine, and sanctions from the U.S. and much of the European Union have cut off funding to Russian oligarchs.

While Oliinyk’s prayer is one of peace, he emphasized that Christians have a right to defend themselves from the Russian invaders.

“And a lot of them are dead now,” Oliinyk said, “and we as Christians, we have an obligation to bury them.”