(WXXI Public Media) – When SUNY Geneseo history professor Kathy Mapes returned to campus at the start of the spring semester on Jan. 27, she noticed something strange mounted to the back wall in her Welles Hall classroom.

“It seemed hot and it looked very blue to me,” Mapes recalled, “almost like blue lights flickering, and I thought that was odd. Why would they put a space heater on the wall?”

She didn’t think much more about it and got ready to teach class. But that night, Mapes woke up at 1 a.m. with a burning pain in her eyes.

“They were watering, they hurt,” she said. “I had a hard time opening my eyes because they were burning so much.”

The next day, several of her colleagues said they had similar symptoms.

One of them did some online research and came to the conclusion that their eye problems were caused by exposure to ultraviolet radiation — UVC light — used to target airborne pathogens.

The box on the wall of room 115 wasn’t a space heater. It was a GLO-310 Upper Air UVC lamp manufactured by UV Resources, one of 17 ultraviolet lamps installed across campus over a one-year period.

SUNY Geneseo bought the units in an effort to slow the spread of COVID-19, according to a report from the New York State labor department’s Public Employee Safety and Health Bureau. 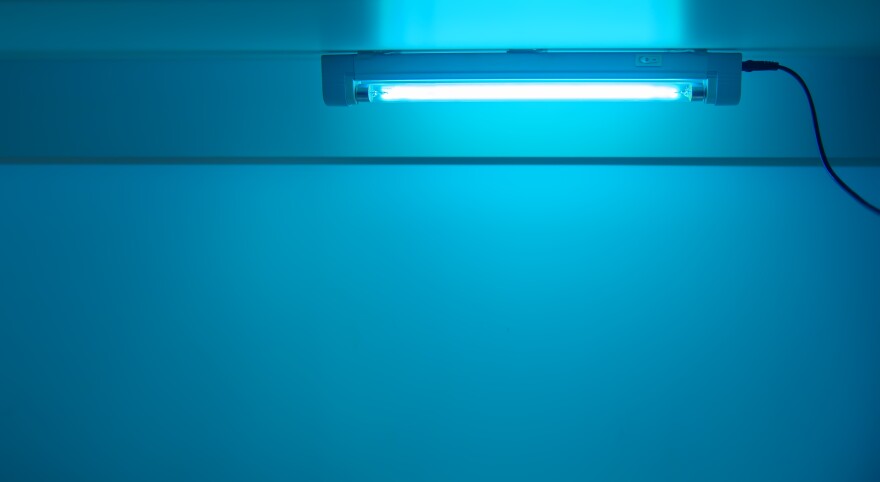 A stock photo of an UV-C lamp. Similar units were installed at the SUNY Geneseo campus. (YuGusyeva/Shutterstock)

The effects of UVC

UVC radiation has been used for decades as a disinfectant, but the FDA says its effectiveness in killing SARS-CoV-2, the virus that causes COVID-19, is unknown.

What is known is that direct exposure to UVC lamps can cause eye injuries and skin burns.

“Exposure to radiation can cause cell damage, and they can sometimes cause reduction in the amount of cells in the surface of the eye and therefore, irritation to the underlying nervous pattern as well,” said Dr. James Aquavella, distinguished professor of ophthalmology at the University of Rochester’s Flaum Eye Institute.

“That’s what causes the pain and difficulty.”

Mapes was diagnosed with UV keratitis, which is caused by unprotected exposure to ultraviolet rays. She was also told that the thin tissue covering her cornea was damaged. It still hasn’t healed.

Mapes believes she is one of eight Geneseo faculty members whose eyes were damaged after they came into contact with the UVC fixtures in their classrooms. Some also reported burning and peeling skin on their faces. She was the only one who would speak on the record about her injuries.

Mapes considers herself lucky. She said others suffered much more severe damage.

“Though the doctors at Flaum Eye Institute are taking scans to make sure that I don’t have permanent damage to my retina,” she added. “That’s the kind of thing that can take months to develop, so they’re not sure about that.”

Mapes said she has spoken to students who were also affected.

“I do not know how many,” she said. “I think most of the students’ symptoms were less severe because they, for the most part, were not facing the lights.”

A SUNY Geneseo spokesperson said college officials would not agree to be interviewed about the incidents because an investigation is ongoing.

The state Labor Department cited the school for two serious safety violations after an inspection in February.

The inspection report, obtained by WXXI, indicated that caution signs were not used to warn against the UVC light fixtures’ potential hazards, and that they were improperly installed in five Welles Hall classrooms.

The manufacturer’s instructions say they should be placed 9 feet from the floor, but those fixtures were mounted at between 7 feet and 7 feet, 9 inches. Some were installed upside down.

In addition, the violation notice said the devices were not assessed before they were installed at Welles Hall. Other UVC boxes were placed elsewhere on campus in 2020, according to the report, but the problems appear to be limited to the Welles classrooms, which got them later.

Mapes said she contacted college leaders immediately when she suspected her eye injuries were caused by UV radiation on campus.

Two days after she said she was exposed to the ultraviolet light in room 115 in Welles Hall room 115, she convinced them to lock the classroom. Mapes said there was a sorority rush event in the building that Saturday and she worried that students would be harmed.

After receiving complaints from other employees, the college hired an industrial hygienist, Dave Duford, to inspect each fixture and assess the potential for harmful radiation.

Duford’s findings were similar to those from the state labor department’s report regarding the installation of the units and the lack of warning signs.

He also wrote that the lamps weren’t angled properly to prevent radiation exposure in some classrooms and that some of the lamps had radiation levels exceeding a recommended limit.

Duford would not comment specifically on the SUNY Geneseo report, but said in general, if a person can see the light emanating from a UVC lamp, they could be exposed to hazardous levels of radiation within a few minutes.

“I wouldn’t even need to measure in a situation like that, because it’s not installed properly (if) I can stand there and look directly into the light,” Duford said.

He said he sees commercial UVC fixtures in medical facilities, schools, and other workplaces. Duford said the germicidal technology can be used effectively and safely if environmental and administrative controls are in place, but most schools don’t have the expertise to monitor radiation levels and ensure safety.

In a March 22 email to faculty members who said they suffered eye damage, Enrico Johnson, SUNY Geneseo’s assistant provost for finance and facilities, said out of an abundance of caution, the UV lights would be removed from classrooms within the following two weeks.

But Mapes said little information has been shared with the entire campus community, aside from a Jan. 31 email.

Bob Ames, assistant vice president for facilities and planning, said in that email that a vendor had tested a UV light unit in a classroom and deemed it safe. He also wrote that other units would be checked across campus.

The email said college health services had seen two students with eye irritation consistent with conjunctivitis, but no reported cases that were confirmed as being caused by UV light damage.

“I was frustrated that our eye injuries were described as ‘eye irritation,’ she said. “I was worried that the students would get the message that there was nothing going on here.”

Neither Ames nor SUNY Geneseo medical director Dr. Steve Radi have responded to messages from WXXI.

Mapes thinks the college had good intentions to protect staff and students from COVID-19, but wishes school leaders had been more transparent once they learned there was a problem.

“I want them to acknowledge that mistakes were made,” she said, “that people were injured, and that they did not communicate with the campus as a whole in a transparent or timely way, and that they’re going to do better next time.”