KEYSTONE CROSSROADS — The Pennsylvania Charter Appeals Board (CAB) has become a political battleground in a larger fight between Gov. Tom Wolf and state GOP leaders over executive appointees.

At present, the board seems to have become functionally non-existent as important disputes between school districts and charter schools are in limbo.

The CAB exists as a place where charter schools can challenge decisions made by their local school boards.

At least they’re supposed to be able to challenge them.

Right now, it’s unclear who would hear the appeals.

The board’s website lists no members other than Acting Secretary of Education Noe Ortega, an automatic appointee.

Keystone Crossroads recently learned that Wolf sent letters to the remaining members of the board in late April telling them that their terms had “concluded.”

Senate Republicans believe the governor may have overstepped his authority.

In essence, the state’s system for approving, rejecting, and modifying charter schools is stuck in a bureaucratic twilight zone. It’s the casualty of a complicated political stalemate, and no one knows how long the impasse will last.

The backstory here is long and messy.

The six-member CAB is supposed to be a backstop to dispute local decisions made about charter schools, which are privately run and publicly funded.

If someone wants to open a new brick-and-mortar charter school or expand an existing one, they have to seek approval from the local school board. Boards also have the authority to close a charter school if it violates its contract with the district or does not perform well academically.

When a charter school disagrees with a school board’s decision, it can appeal to the CAB.

The members of the CAB are appointed by the governor and approved by the state senate. According to Pennsylvania charter school law, members are supposed to serve four-year terms “or  until a successor is appointed and qualified.” But since becoming governor in 2015, Wolf hasn’t nominated anyone to the board. As a result, members appointed by his Republican predecessor, Gov. Tom Corbett, have continued to serve long after their terms expired.

Then, on April 23, Wolf sent terse letters to the remaining members of the CAB.

“Your service on the State Charter School Appeal Board is concluded as of today,” the letters read.

Wolf has also for the first time nominated replacement appointees:

A spokesperson for State Sen. Kim Ward (R-Westmoreland), who chairs the Senate Rules & Executive Nominations Committee, confirmed that Wolf had “removed everyone on the State Charter School Appeal Board.”

“We are reviewing and think the Governor may have overstepped his authority,” said spokesperson Erica Clayton Wright in an email. 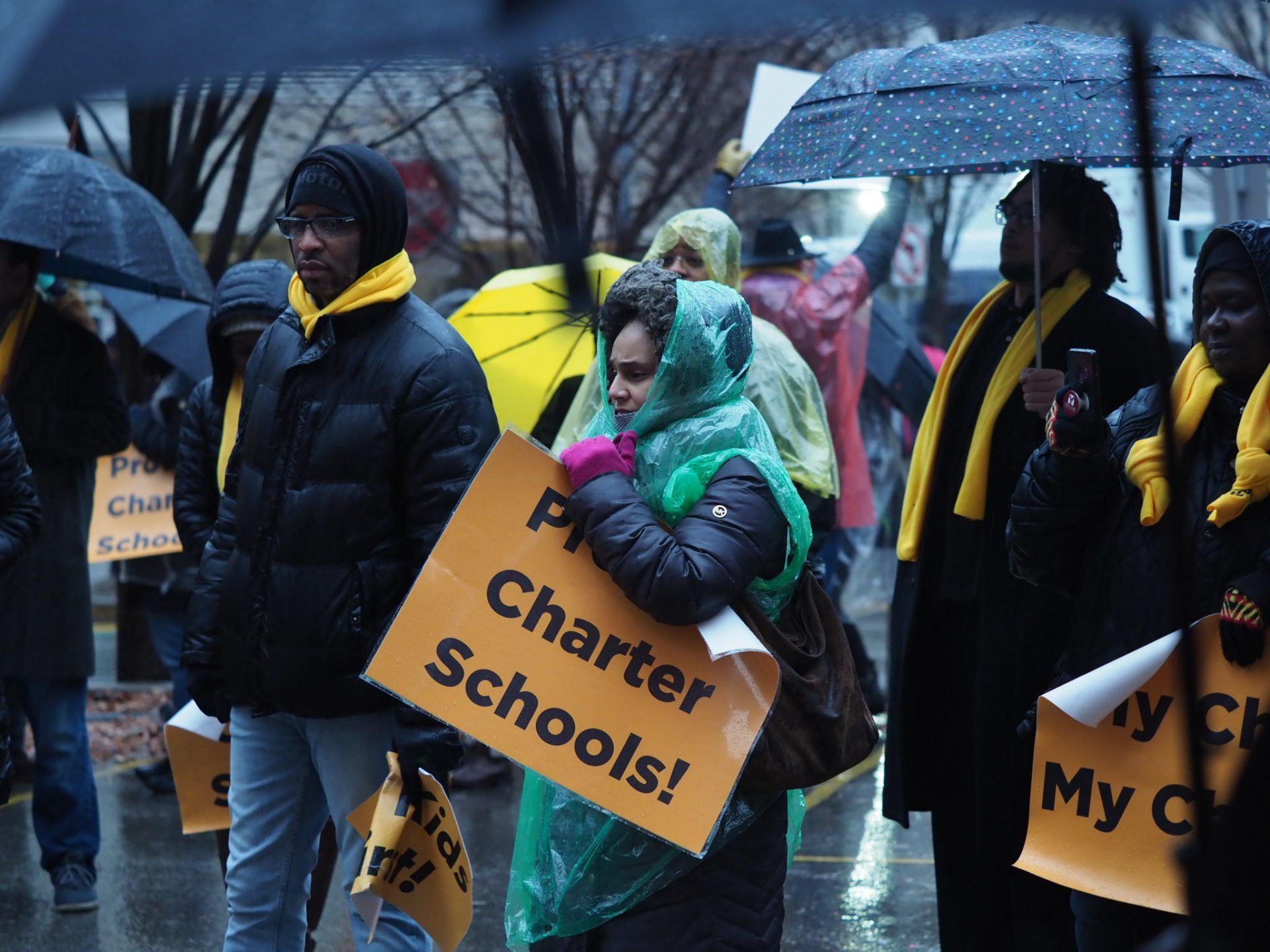 FILE PHOTO: Charter advocates outside of the David L. Lawrence Convention Center in Pittsburgh on Dec. 14, 2019.

There’s confusion over whether the letters sent by Wolf to the CAB members have any legal weight. The CAB canceled its scheduled April meeting, but is set to meet on May 18, according to its website.

Multiple sources told Keystone Crossroads that the governor may not have the authority to remove CAB members before securing replacements. Securing replacements could be difficult right now because of a sprawling political fight that has nothing to do with education policy.

As reported in several outlets, Senate Republicans vowed to block Wolf’s appointment to a state utility commission as retaliation for him placing Pennsylvania in a regional initiative to reduce greenhouse gas emissions.

Wolf’s administration responded by cutting ties with multiple people serving on various state boards beyond their original terms, according to the Center Square. Multiple sources confirmed to Keystone Crossroads that the current dustup over the CAB is tied to the original dispute over climate change.

Lenny McAllister, CEO of the Pennsylvania Coalition of Public Charter Schools, says education policy has become collateral damage in this larger fight. He blames Wolf for trying to ram through changes to the CAB without bipartisan support.

“His idea of reform is, ‘I’m going to do it my way or no way,’” said McAllister. “That’s a political game. That’s not something that’s going to help families.”

McAllister is among those who believe Wolf’s sudden dismissal of the current CAB members runs foul of the law based on the idea that Wolf can’t dismiss members before having new ones approved. He raised the specter of legal action.

Right now, though, it’s hard to tell what will happen. McAllister and others say they’re unclear whether the dismissed board members will still attempt to meet or vote.

State Sen. Lindsey Williams (D-Allegheny) says the Wolf administration tried unsuccessfully for years to reach agreement with Republican leaders on new CAB nominees. That stalemate caused the board to languish, she said. The CAB already had vacancies before the administration’s latest maneuver, hampering the board’s ability to rule on certain cases.

“The board was already struggling to do some of its work,” said Williams. “These nominations needed to happen.”

Williams sees the administration’s latest move as a worthwhile attempt to jumpstart the nomination process after years of inaction. She believes the governor does have the right to remove board members serving expired terms.

The governor’s office did not return requests for comment. A Pennsylvania Department of Education spokesperson said Wolf is “continuously reviewing boards, commissions, and appointments to see what needs to be filled, review expired terms, and refresh gubernatorial appointments.”

There’s at least one pending case around Propel, a charter organization based in Pittsburgh. A pair of charter schools in Philadelphia also said recently they would appeal to the CAB after the school board voted not to renew their contracts.