STATE IMPACT PENNSYLVANIA – On a recent afternoon, Ken Broadbent walked the aisles of his union’s “weld shop.” Behind orange plastic curtains that shield the eye-searing brightness of their torches, a few dozen apprentices practiced welding pipes together. Each will end up with about 700 hours of training.

“Welding is like shooting pool, the more you do it, the better you’re gonna get,” Broadbent said.

Broadbent is the business manager for Steamfitters Union 449. He was showing off his union’s brand new training center in Butler County, about half an hour north of Pittsburgh.

Broadbent says it’s money well spent. His members will have plenty of work, thanks in large part to the oil and gas business. They’ll be working on natural gas processing plants, power plants, and Shell’s multi-billion dollar ethane cracker in Beaver County, which will employ 1,500 steamfitters at peak construction.

“I’m almost going to double the amount of people when it peaks working out of my union. That is good for our education fund. That’s good for for our health coverage. It helps us stay in business,” Broadbent said.

The relationship between oil and gas and unions wasn’t always this friendly, he said. When the shale gas boom initially hit Pennsylvania 10 years ago, many of the companies who came to the region were from right-to-work states like Texas and Oklahoma.

“A lot of times they don’t know how to work with labor unions or think that they might not be in their best interest,” Broadbent said.

Nationwide, fewer than 5 percent of workers in oil, gas, and mining are unionized, about half the national average. 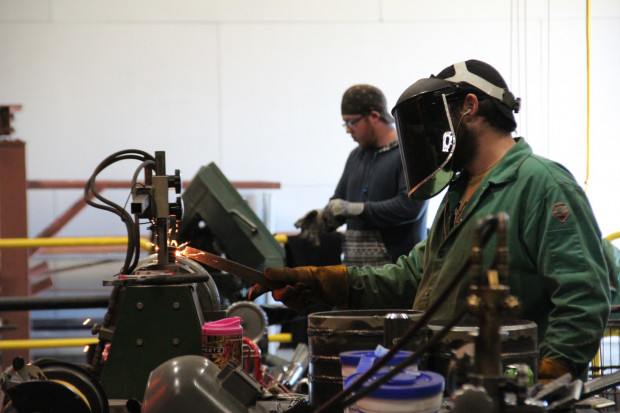 But as the fracking boom has grown in Pennsylvania, the industry has turned to organized labor to build large infrastructure projects, like Sunoco’s 300-mile long Mariner East 2 pipeline, and Shell’s ethane cracker.

While that’s been good for unions, industry critics say that could be bad for Pennsylvania. Doug Shields works for the environmental group Food & Water Watch.

“When I read that Sunoco had pledged to build the Mariner 2 all union, I go, ‘Well, there goes any any possibility of dissent or constructive concern over the environmental impacts’” from Democrats, Shields said.

Shields was a Democratic city councilman in Pittsburgh and has been an active critic of fracking for years.

He says while the oil and gas industry is a big political donor for Republican candidates, unions fulfill a similar role for Democrats. And he thinks Pennsylvania’s Democrats will be hesitant to impose tough environmental regulations if it means slowing down gas development.

He points to the Department of Environmental Protection’s approval of the Mariner East 2 project under Gov. Tom Wolf. Critics say that approval was rushed. The project was temporarily shut down by the DEP earlier this year, after dozens of spills and other permit violations during construction. The administration has denied that the permits were rushed.

Shields says Democrats “may well recognize the problems” with gas development, “but they also understand very well what side their bread is buttered on, and to become adverse to the labor interests in their quest for a job would be suicidal.”

A review of campaign finance records by StateImpact Pennsylvania and the Allegheny Front found trade unions had contributed over $3 million to Wolf’s $11 million campaign war chest for 2018. Several unions with extensive work in oil and gas projects have already upped their donations to Gov. Wolf’s campaign compared to 2014. 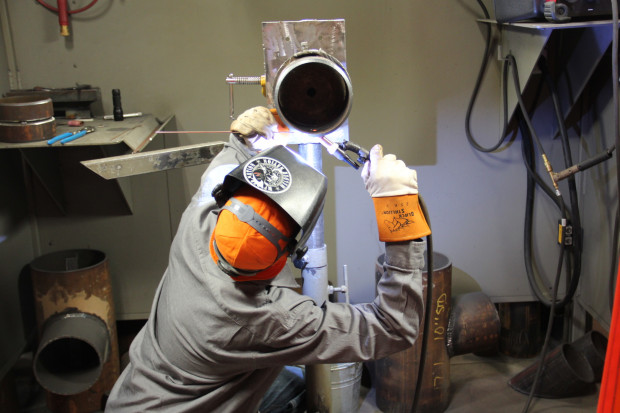 That includes Pittsburgh’s Operating Engineers Local 66, which is helping to build the ethane cracker. It gave the Wolf campaign $215,000 in 2017, more than twice what it gave to the campaign in 2014.

Jim Kunz, business manager for the union, said the union is spending so much on Wolf in order to stop potential Republican nominee State Sen. Scott Wagner, an opponent of unions. But the union says it also helps that Wolf is favorable to natural gas development.

“Scott Wagner has not been a friend of labor,” said Kunz. “We also think Gov. Wolf has been very supportive of the gas industry.”

“We don’t see this industry as the deathknell of the environment as some do on the Left,” he said.

Wolf’s campaign did not respond to interview requests, but in a statement, spokesman J.J. Abbott said the governor takes a “balanced” approach to natural gas with “a focus on both strong environmental protection and more economic opportunity,” and meets with a variety of constituents on the subject.

The Pittsburgh-area Steamfitters union has given Wolf’s campaign committee $72,500 in 2017, more than half of its donation for the entire 2014 campaign cycle. Broadbent says the union’s donation policy is simple: it gives money to candidates that will help their members.

“Most of the labor unions are proactive and know that they need to support politicians not only with PAC money but door knocking, phone calling. Making sure members get out and vote. You can’t have legislation that affects you” becoming law, Broadbent said.

Often the issues the unions care about are workforce-related, like prevailing wage or unemployment insurance legislation. But they can also include laws that could hurt business they depend on.

In February, the Steamfitters threw a lunch fundraiser for Wolf at their Pittsburgh union hall. Before the event, they sat down with the governor and other local union leaders. They also invited a officials from the Marcellus Shale Coalition, the state’s natural gas trade group.

It was the first face-to-face meeting between the trade group’s president, Dave Spigelmyer, and Governor Wolf since he was elected in 2014. Spigelmyer said they discussed the state’s oil and gas permitting backlog and the severance tax on natural gas the governor has proposed, and which the gas industry opposes.

Spigelmyer said he felt he was “honored” to be a guest of the trade unions.

“They made sure the governor knew that this industry was important to them and that he needed to help make sure there was a proper climate for folks to invest capital because it was their jobs at risk if that’s not the case.”

Broadbent said he invited the gas industry to meet with Wolf because, at this point, the fortunes of his union and the oil and gas industry are interwined.

“We help people that help us,” he said. “People that create jobs–we’re going to lobby for and help.”