STATEIMPACT PENNSYLVANIA – A scientist at Johns Hopkins University told a public health conference in Pittsburgh that Pennsylvania should ban fracking because of its impact on public health and climate change.

Brian Schwartz has found through years of National Institutes of Health-funded studies that being close to fracking increases the likelihood of asthma, premature birth, headaches, and maternal stress levels. He said the evidence that fracking is bad for your health is clear enough.

“What would I say now? I would say because of the regional and local health concerns and concerns about climate change, we should stop fracking–everywhere,” he said.

The comment drew a round of applause at the normally staid annual conference, presented by the League of Women Voters of Pennsylvania and held at the University of Pittsburgh. The conference this year featured several public health scientists presenting research on fracking’s effects on maternal health, mental health, and heart problems, and the latest research on air and water impacts from fracking. Many local environmental activists were in attendance.

The Marcellus Shale Coalition, in a statement, said banning fracking “would bring our economy to a standstill. It would result is the loss of hundreds of thousands of good-paying jobs and wipeout {sic} billions of dollars of capital investment in Pennsylvania while reversing the environmental progress we have gained thanks to natural gas.” 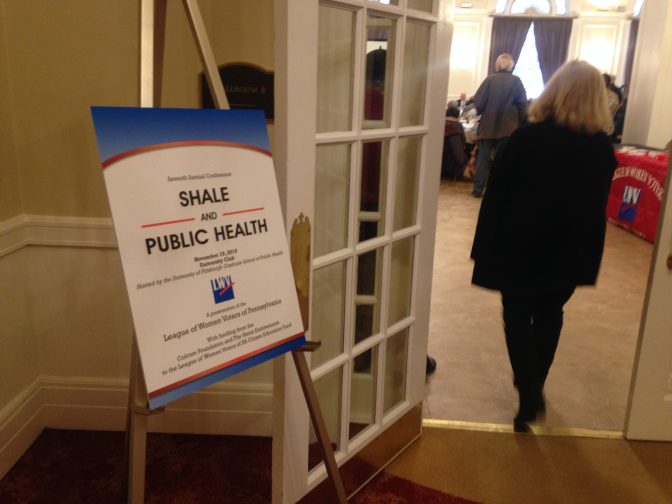 Schwartz, a professor of environmental health and engineering at Johns Hopkins Bloomberg School of Public Health, said the idea that natural gas was a “bridge” fuel between an economy based on coal and one based on renewables was becoming harder to square with dire climate warnings from the UN.

“This bridge to renewables, if you’re worried about the climate, it can’t be a 50-year bridge,” he said. Even with an increasing role of natural gas, emissions in the US rose 3.4 percent last year, led chiefly by growing electricity-related emissions.

Schwartz, who has presented his research at the conference in the past, but had never before called for a ban on fracking, said he’d recently become convinced the time had come to make a public statement.

But Scott Perry, deputy secretary of the Pennsylvania Department of Environmental Protection’s Office of Oil and Gas Management, said banning fracking was not politically feasible in a state where the legislature won’t even pass a severance tax on natural gas, let alone consider banning hydraulic fracturing.

“We can’t even tax the oil and gas industry in this state. The policy has consistently been to develop the resource but protect Pennsylvania’s environment.”

Perry said by displacing coal on the electric grid, natural gas has led to cleaner air in the state. He said for the first time, every Pennsylvania county — except Allegheny County, home to US Steel’s Clairton Coke Works — meets the EPA’s fine particulate matter standard (PM 2.5). He says that’s due to the displacement of coal that the fracking industry has allowed.

Doing away with fracking would also hurt those at the low end of the economic scale, he said.

“High energy prices disproportionately affect the poor, and requiring those folks to make radical changes in their life is not reasonable and will not happen,” Perry said.

Perry, the head oil and gas regulator in the state, also criticized declines in funding for the DEP, which he says have left his office stretched thin.

His office, responsible for overseeing the fracking industry, is down from 226 employees a few years ago to 190 right now. Overall state funding for the DEP is down 30 percent from a decade ago, and the agency has about 25 percent fewer people working for it than before the fracking boom took off.

“We are now beyond cutting bone. We’re choosing which limb. We’ve already cut off the right leg. We’re deciding now if we can do without the left arm. There is just no support for our agency in the legislature,” Perry said.

His staffing levels are funded primarily by the impact fee on new shale gas wells and a fee charged on each new well permit. Those revenues have fallen in recent years, as the total number of wells drilled in Pennsylvania has fallen, even as total gas produced in the state has climbed. Perry said a “stable and dependable” source of income — either as a yearly fee on gas producers, dedicated funding from the state’s general fund, or some other device — would be better.

“The way we’re funding it right now is the worst way to do it, but it happens to be the only tool we have,” Perry said.

A spokesman for Gov. Wolf didn’t immediately respond to a request for comment.

Mike Straub, a spokesman for the Pennsylvania House Republicans, said in an email current DEP funding levels “were in line with” Governor Wolf’s proposed budget in February. “As for future funding, we will continue to work with the administration and DEP to secure appropriate funding that is the best interest of current taxpayers and Pennsylvanian’s long-term future success,” he said.

Perry says as a result of funding drop-offs, his department has had to scale back technology projects and inspections of natural gas storage facilities — similar to the Aliso Canyon facility in California that leaked more than 100,000 tons of natural gas in 2015 and 2016 — from twice a year to once a year.