STATEIMPACT PENNSYLVANIA – As Shell Chemical is building a new plastics production plant in western Pennsylvania, there’s been outrage worldwide over environmental problems caused by increasing plastic pollution. Pictures of impacted wildlife like those of turtles with plastic straws in their nostrils have led to political action around plastic in the oceans.

One researcher is studying plastic waste, not in the oceans, but in Pennsylvania’s rivers, and she’s pushing for solutions.

A boom across the creek catches trash, along with leaves and sticks, and directs the debris into a cement containment area. Floating on top are cigarette butts, chip bags, water bottles, and candy wrappers.

Julie Grant / The Allegheny Front. Researcher Sherri Mason wants to provide data on what kind of plastic is being found in rivers so municipal leaders can make better decisions on regulating plastic waste.

Mason and her students use a large rake to pick up the litter and place it a bin, as they do a few times a week, at the same time of day here and at a second research site at Cascade Creek.

They then take their collected trash to the lab, and lay it out to dry on screens where students sort it, and input data about each piece: what product it is, the material, and the type of container.

“Well you’ll notice is that the vast majority of it is either Styrofoam or bottles,” Mason said. “It’s a lot of plastic bottles.”

Mason has already researched plastics in the Great Lakes. “And what we see out there is really, really small,” she said.

Plastic doesn’t go away, but it breaks down in the environment. One bottle can degrade into hundreds, even thousands, of tiny pieces of plastic the size of a grain of sand, which can be eaten by birds or fish. The impact on human health is still unknown.

Local governments are considering banning plastic bags and other single use plastics, and Mason gets asked for data to help them make informed decisions.

Mason wants to find out how much plastic is flowing out from the rivers to the Great Lakes, and how is it affected by rainfall, season, and the economies of local communities. She’s hoping to correlate what’s pulled out of the rivers with what is collected in beach clean-ups.

And she’s pushing for solutions.

“If you want to solve a litter problem, to me, a good starting point is policies that ban styrofoam, and at least put fees on bottles, so that then they’re collected,” she said.

In July, the Pennsylvania legislature put a moratorium on municipal regulation of plastic for at least a year. But still, some cities, including Philadelphia, are considering bans.

“Bans are not the way to solve these problems,” said Keith Christman, director of plastics markets for the American Chemistry Council, a trade group that supports the plastics industry.

Plastic is use for everything from medical devices and cars to keeping food fresh.

“Plastic plays a very important role to society,” Christman said. “The solution to this challenge is to improve our collection, recycling and recovery of plastics and other materials.”

Christman’s group has a goal of recycling all plastic packaging in the U.S. by 2040.

Plastic recycling is “an abject failure”

But Judith Enck, founder of the non-profit Beyond Plastics, supports a different goal: produce less plastic.

“It’s an issue that gets worse every single day,” Enck said. “Especially when it rains hard, and you have all these storm sewers, basically they’re delivery devices to get plastics into the water.”

According to Beyond Plastics, half of all plastic in the world was made within the last thirteen years, and more is being produced all the time.

In Beaver County, Pennsylvania, Shell is building a 6-billion dollar plant that will take ethane from natural gas and convert it to plastic. It’s expected to produce 1.6 million tons of plastic pellets each year. More plants like this are under consideration in the region. 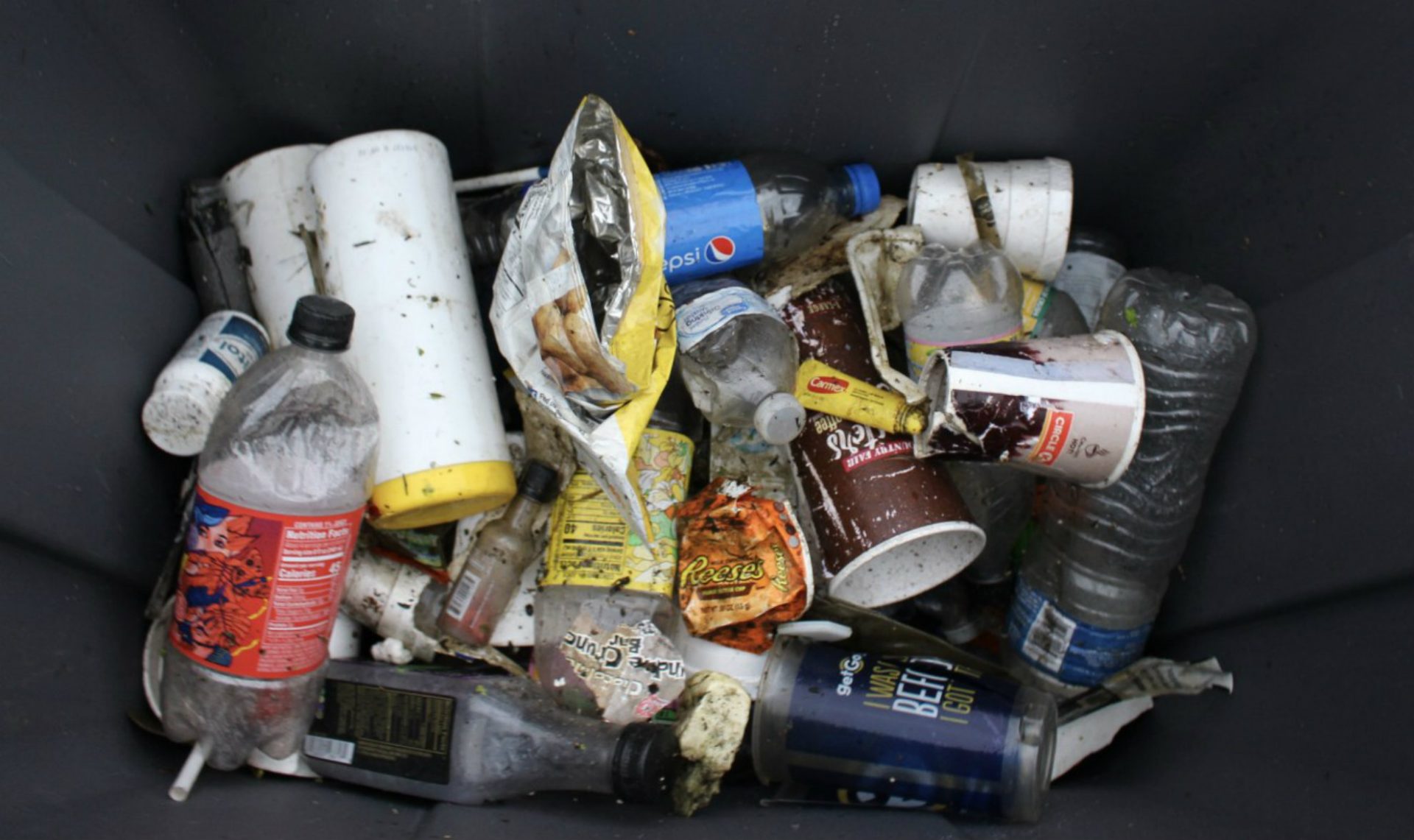 Julie Grant / The Allegheny Front. Big brands are beginning to feel the pressure to take responsibility for their waste.

For Enck, these ethane crackers are a big concern for her group.

“The plastic makers and the fossil fuel companies would have us believe that there’s no problem producing vast amounts of plastic because you can recycle it all,” Enck said. “That’s simply not true. Plastic recycling has been an abject failure.”

According to the EPA, in 2014, when the U.S. achieved its highest ever recycling rate, it was 9.5-percent.

Currently, city recycling programs across the country are collapsing. China has stopped accepting plastic waste from the US for recycling. There’s little market for recyclables, and the costs are skyrocketing.

Pressuring Brands to Make a Change

Penn State’s Sherri Mason wants product manufacturers to help create a market for recycled plastic. At Mill Creek, she points out the brands of the plastic trash as it blows into the containment area: a Dasani water bottle and a Dunkin’ Donuts cup.

There’s been a focus on brands since a report last year by the environmental group Greenpeace found Coca-Cola, Pepsi, and Nestle were the world’s biggest producers of plastic trash. While many bottle labels say “Please Recycle,” Mason says these companies need to take responsibility for their packaging.

“You can’t say that you want people to recycle and then use very little post-consumer plastic in your product,” she said. “It’s only a recycling process if people are using it at the other end. And if the companies who make the bottles aren’t actually using it then who else is?”

Some brands say they are taking action to use more recycled plastic.

In a press conference this week, Coke, Pepsi, and Keurig Dr. Pepper, maker of single use coffee pods, announced a joint recycling initiative, “We’re coming together across industry with a laser focus,” said Katherine Lugar, president of the American Beverage Association, “…to reclaim our plastic plastic bottles, so that they can be made into new bottles, reducing our use of new plastic.”

Lugar says companies will be pushing to recover more plastic bottles, and jointly investing $400 million to improve the recycling system in four parts of the country, which have yet to be announced.

This is one move to correct course on the problem of single use plastics. But Sherri Mason says the solution will be multifaceted, and will mean a change in the way people think.

“It’s getting people to realize that our disposable culture is having an impact all throughout the chain, all across the globe, and ask, ‘what kind of society do we really want?’”