WXXI-Jessica Lynn has a mission for her Rochester nail salon.

“What we’re trying to offer here is just a safe environment for all,” she said.

At Pure Sole Nails on South Clinton Avenue, there’s no acrylic nails, no dipping powder and no equipment that causes heavy dust.

Lynn said her salon is seven-free or better, meaning at least the seven most harmful toxins found in a typical nail polish are not in theirs.

“I feel like normal nail polish is so toxic that if you didn’t have an alternative, all of those chemicals are just going to go into your body,” she said.

But this salon’s environment is far from the norm.

Cornell’s ILR Worker Institute recently published a study called “Unvarnished: Precarity and Poor Working Conditions for Nail Salon Workers in New York State.” In the report, researchers highlighted the unhealthy conditions found in most nail salons, along with other inequities.

“Standards (at nail salons) just aren’t adequate,” said Zoe West, one of the lead researchers of the study. “They’re not enough to support a living wage or to support the genuine health of workers.” 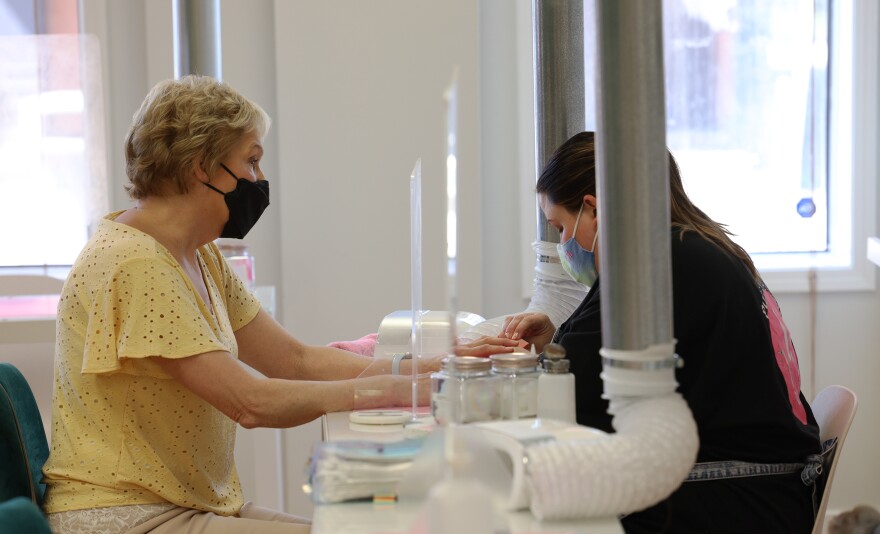 Shirley VanDerMallie gets her nails done every two weeks with Heather Lynn who has been doing nails for 12 years. VanDerMallie likes the fact that Pure Soul Nails only uses non toxic products and has instaled a venting unit to filter the air in the shop at every station. Max Schulte / WXXI New

The study also reveals that on average, nail technicians make a little less than $14 an hour with no benefits and an unpredictable schedule. That workforce is predominantly made up of immigrant women of color, and West said they’re often too afraid to report their work conditions because of their immigration status and economic insecurities.

“Understandably feeling like it’s quite risky, to come forward and speak out, because they don’t want to lose their job,” West said.

Maya Bhusal Basnet is a Nepalese woman who has been a nail technician in New York City for more than a decade.

Speaking through a translator, Basnet said she suffers from a skin condition that her doctor confirmed was caused by the chemicals used during her services.

“Whenever I go to show my skin, the doctor asks where I work and I tell them, and the doctor responds by saying that this is because of your work,” Basnet said.

“If we were to have all these at the minimum, it will help all the workers be healthy,” Basnet said. “But in the current nail salon, these haven’t been implemented yet.”

Basnet said she will continue speaking up for her fellow nail techs until action is taken.

“I will not leave the industry,” she said. “If I were to leave, I worry about if there’ll be someone else would even like raise their voice to address this issue.”

Daisy Chung is the director of the New York Healthy Nail Salons Coalition, an agency geared toward ensuring that nail salon workers receive all that Basnet and other nail techs ask for.

Chung said the issues of the nail industry are deep-rooted.

“At the heart of the issue in the nail salon industry is that it’s incredibly, incredibly broken,” Chung said. “What this industry needs is an entirely new foundation in which to operate.”

Chung said the coalition is currently supporting a New York state bill called the Nail Salon Minimum Standards Council Act. It would provide salon workers with at least the standard benefits. The act is currently in committee.

“We do need more enforcement, and we need to hold folks accountable,” Chung said. “But at the same time, let’s figure out solutions that are going to be for everybody that’s impacted by this industry.”