CANTON, NY (NCPR) – The Thousand Islands is a major tourist destination, but right now it’s flooding. Water levels in the St. Lawrence River and Lake Ontario are higher than average and they’re expected to keep rising.

Plenty of places along the St. Lawrence River cater to summer tourists, but the community of Thousand Islands Park boasts a special kind of charm.

Thousand Islands Park, or TI Park as it’s known to locals, has the look of a really well maintained Victorian village – big houses with wrap around porches. There’s a restored old hotel and a quaint little library in the middle of the big, green commons. 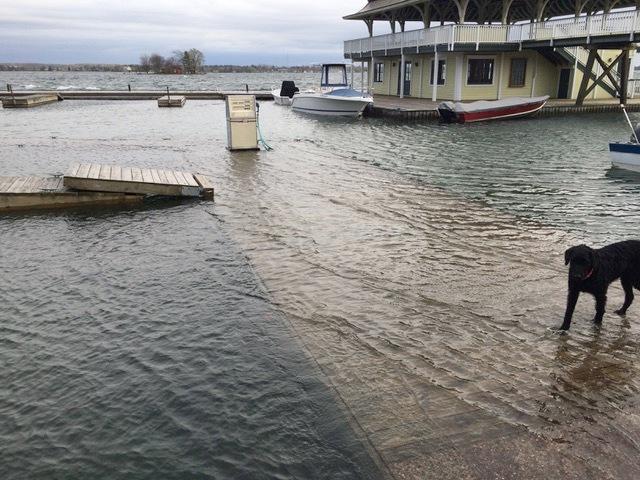 Both tourists and locals had to get gas elsewhere during the summer of 2017.CREDIT HOLLY PELLAND

Pelland runs the TI Park marina. Boaters can dock there, fill up on gas or just grab a scone at the cafe Pelland runs. She’s also got a business renting out bikes and kayaks.

Almost every part of what Pelland does relies on the St. Lawrence River. That’s why she’s been keeping a close eye on this spring’s rising water.

“We just watch it everyday because we’re not sure what’s going to happen,” said Pelland. “We don’t want a repeat of two years ago.”

Two years ago – 2017 – was when Lake Ontario and St. Lawrence River surged over docks and up into boathouses and low-lying cottages. The water stayed high into August.

“I had no marina business,” Pelland said. “My kayaks, I worked out of the back of my truck. It was a big financial hit.”

The 1000 Islands International Tourism Center surveyed more than 100 businesses in 2017. It found more than 80% of them were hurt by the flooding. Some lost 40% of their business that year.

It wasn’t just tourists who took their business elsewhere. Jim Brasser remembers what the marina looked like two years ago.

Brasser has lived in Thousand Islands Park and boated on the St. Lawrence River for more than 30 years. When the TI Park marina was closed most of the season, Brasser went across the river and bought gas elsewhere.

This kind of flooding is disruptive and it’s expensive. New York state alone spent nearly $100 million in clean up and recovery after 2017.

“TI Park sits up high, so in general it didn’t affect the cottage owners here, but it did affect their boating here.”

It’s too early to know how this year’s high water will affect business in the area.

“We don’t have that many people yet – tourists – because school isn’t out yet,” Peterson said. She is hopeful the flooding won’t have as big of an effect on tourism as it did in 2017.

This weekend marks the start of the tourism season; the marina in TI Park opens, so does Boldt Castle.

Meanwhile water is expected to keep rising at least for another few weeks, though the National Weather Service says it does not expect flooding to be as bad as it was in 2017.