KEYSTONE CROSSROADS – Although several studies suggest cyber charter students learn less than peers in other schools, the option remains popular with many families. Some cite the added flexibility of learning remotely on a laptop as a major draw, while others say their students need an online option to avoid bullying or to accommodate medical needs.

But the sector has long-drawn criticism from school district administrators.

Districts must pay a per-pupil fee every time one of their residents opts for a cyber charter school, and many administrators say the expansion of cyber charters has inflicted severe fiscal damage on traditional schools. In 2017-18, districts spent a little over one billion dollars on cyber-charter tuition payments — a cost superintendents often say isn’t proportional to the quality of the education students receive.

Superintendents have also complained that cybers are a way for students and families to dodge in-person scrutiny and truancy concerns.

The intensifying debate has fractured traditional coalitions, leading some Republicans, like Sonney, to question whether their home districts can bear the outflow of students to cyber charter schools. But many in Sonney’s own party believe his bill is an anathema to the general principles of parent choice, and they don’t trust a remedy that puts cyber education in the hands of traditional school districts.

That fracture was on full display during Tuesday’s hearing.

“Thanks for bringing this piece of legislation forward,” Representative Mike Tobash (R-Dauphin) told Sonney. “You have waded into controversial territory.”

The legislation itself is long and complicated.

It would compel all school districts to run or oversee three, full-time virtual education programs. Of those three, at least two would have to be run by outside vendors. Each district would have to submit a “cyber education plan” to the state outlining how they plan to meet the new mandate.

Bill proponents see this middle ground as a way to maintain parent choice and flexibility, while also giving cyber charter schools a path to remain in business by offering their services to the traditional school district.

Crucially, Sonney said, the proposal ensures that traditional districts have ultimate control over all the dollars they spend on virtual education, rather than being forced to make tuition payments to charter schools overseen by the state.

“We support this new paradigm,” said Eric Eschbach, superintendent of the Northern York County School District, speaking on behalf of the Pennsylvania Association of School Administrators (PASA). “It will bring greater accountability and efficiency to cyber-learning options without sacrificing choice options for students.” 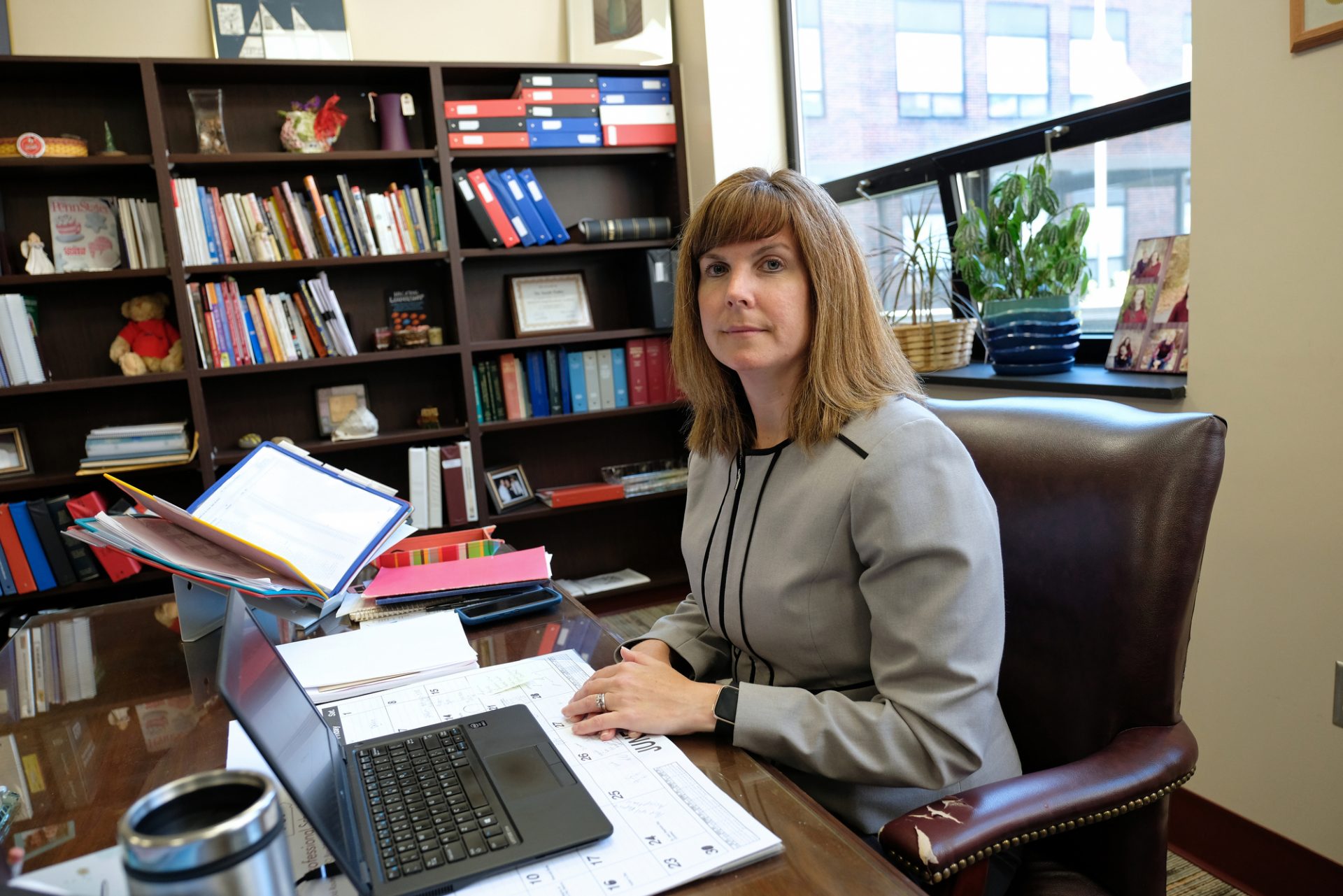 Matt Smith for Keystone Crossroads. Saint Clair School District Superintendent Sarah Yoder poses while in her office June 11, 2019, during an interview about parents in her district using cyber charter schools as a way to avoid truancy issues. Yoder also spoke of the roles schools play in providing a daily welfare check on students with troubled or volatile home situations.

First, many pointed out that some families leave for cyber charter schools precisely because they no longer trust their home district. Funneling those families back to a district-run or district-approved program, they argued, would cause a backlash.

Other skeptics noted that many of the existing district-run cyber programs sprouted up in response to the growth of cyber charter schools. They worried that removing cyber charter competition would lead to lower-quality options.

There has indeed been a boom in district-run virtual programs. Of the 172 school districts that responded to a 2018 survey by the Pennsylvania Association of School Administrators (PASA), 152 said they were running a local cyber school.

There is, however, little available data on how students attending district-run cyber programs perform. Andria Saia, who runs the Capital Area Intermediate Unit, said that right now, state testing data isn’t broken out in a way that allows districts or the public to easily determine the effectiveness of district-run programs.

“We continue to strive towards being able to get a true apples-to-apples comparison in terms of test scores,” Saia said.

Leaders from the cyber-charter sector argued that this lack of information should give legislators pause.

“I would encourage you, before we go too far, to get that data from these district-run programs,” said John Chandler, CEO of the Pennsylvania Virtual Charter School. “It’s hard to get. We don’t know how they perform.”

Cyber charter leaders explained their own poor performance on state tests as a function of the fact that they often receive students who’ve languished in a traditional school setting and need help catching up.

“None of us has a magic wand,” said Maurice Flurie, CEO of Commonwealth Charter Academy.

None of the lawmakers who spoke Tuesday argued for getting rid of virtual education. But many — even some who oppose Sonney’s bill — hinted that they would be in favor of some reforms.

“I think what we have here is a funding formula and accountability issue,” said Rep. Jones, “both of which can be addressed within our current framework.”