Could the Farm Show’s annual butter-sculpture centerpiece, he asked, be a dairy version of Gritty, Pennsylvania’s newest and arguably most internationally-beloved mascot?

“So, he called and made a very compelling pitch,” Redding recalled. “And I said, let me think about it.”

It took some work. Along with Gritty, the face of the Philadelphia Flyers, the plan was broadened to include the Philadelphia Eagles’ Swoop and Steely McBeam of the Pittsburgh Steelers for cross-state appeal. Then the Agriculture Department had to get permission to use the mascots from all three sports teams—a task Redding said was outside of their usual area of expertise.

“There were skeptics who didn’t think that Butter Gritty would ever come,” he said. “Today is triumphant for any number of reasons.” 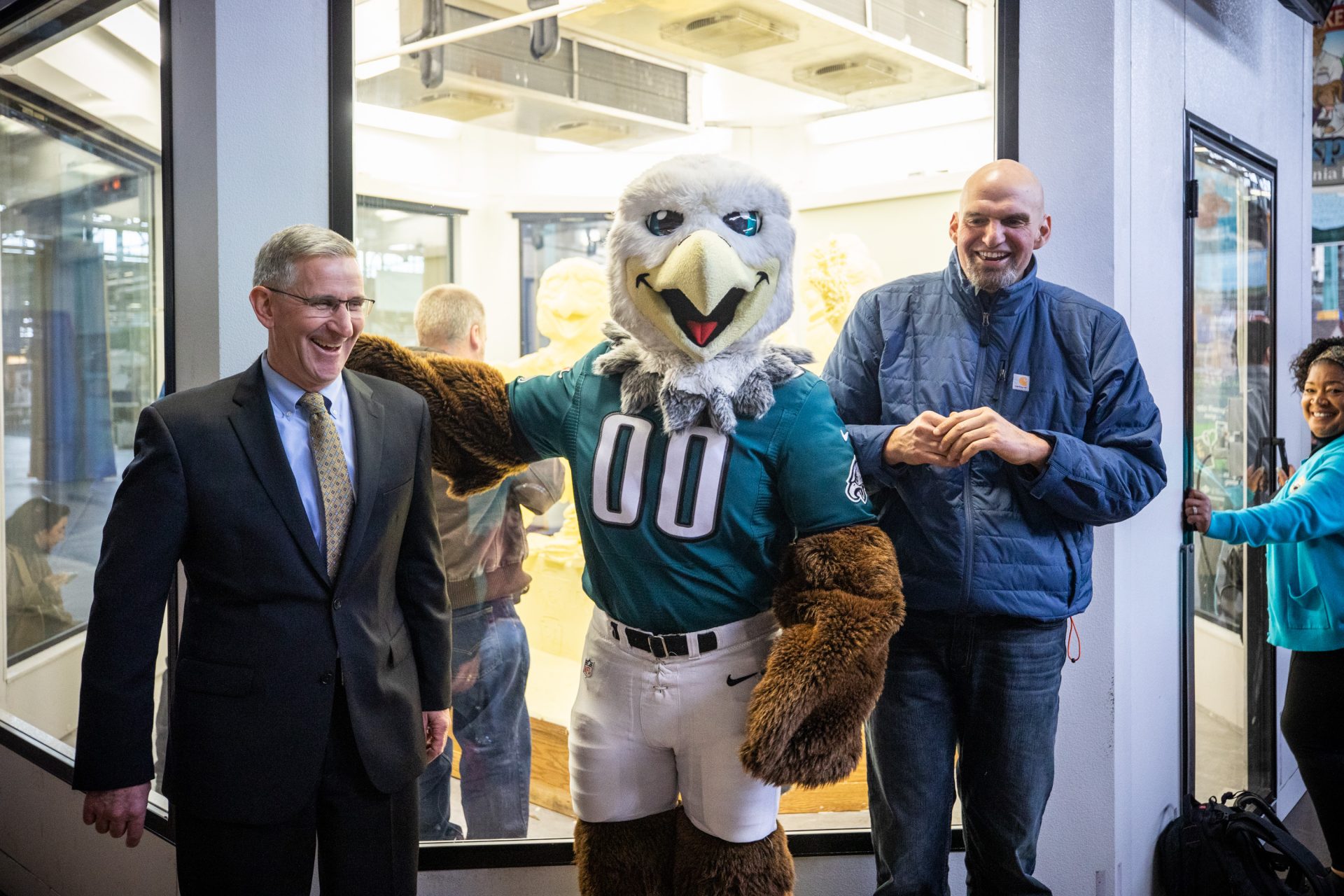 Pennsylvania Department of Agriculture Philadelphia Eagles’ Swoop poses for a photos with Secretary of Agriculture Russell Redding (left) and Lt. Gov. John Fetterman after the unveiling of the 2020 Pennsylvania Farm Show butter sculpture.

For nineteen years, couple Jim Victor and Marie Pelton, who are based in the Philadelphia suburbs, have been making the Farm Show sculptures. Usually they depict pastoral scenes or dairy-related characters. Victor said this was a new challenge—but one they felt prepared for.

“I was excited about it, I thought it was really cool,” he said. “Because we had done Gritty before in cheese, actually.”

Cheese Gritty, however, only showed the mascot’s head. Pelton said their massive Butter Gritty was trickier.

“It just kept getting bigger and bigger,” she said. “Jim was seeing it as something like, do it bigger, make it a rounder form, and I’m like oh my gosh, I think that’s too big.” 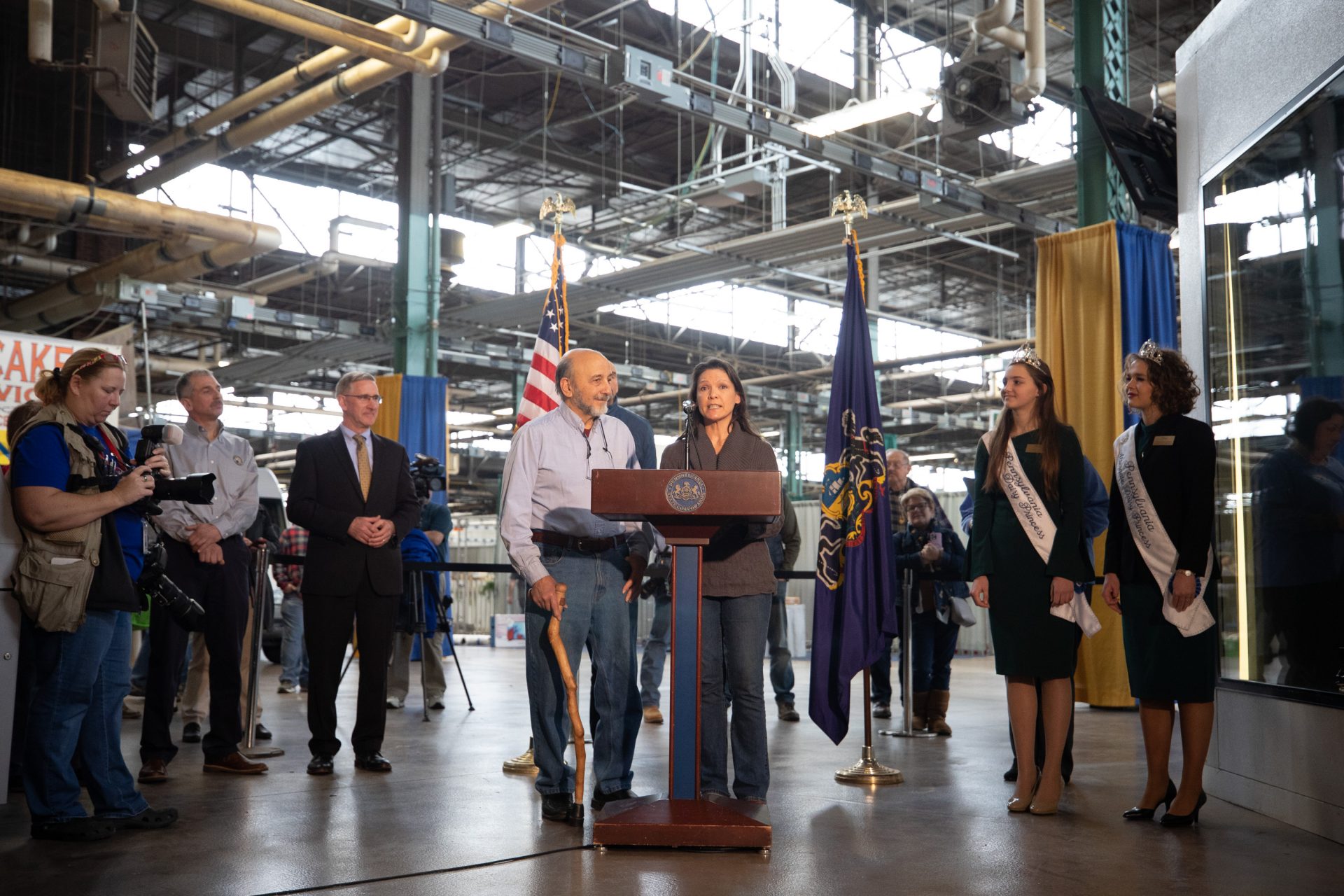 In the end, Pelton and Victor said Gritty, Steely McBeam and Swoop all came together nicely. The mascots are shown tailgating with a cooler stacked with Pennsylvania products, like a burger, cheese and glasses of milk.

Redding noted that aside from the novelty of depicting mascots in butter, there’s a practical reason for this year’s sculpture: The dairy industry needs a boost.

Thanks to international trade tension cutting into profits and declining demand for milk, Redding said Pennsylvania’s dairy farmers — who make up about 30 percent of the commonwealth’s agriculture economy — are dealing with “a three-year drought.”

“We need any ambassador we can get,” he said. “Gritty has been one of these great stars, and if we can use his recognition to help talk about dairy and its importance, but also all that encompasses agriculture in our rural and urban areas, yeah, we want to do it.”

He said there are some good signs this year. Although milk consumption is still low, total dairy purchases are up thanks to cheese and yogurt.

The butter sculpture has already stirred up some controversy during its short time in the public eye, namely for its exclusion of other Pennsylvania mascots, like the Philadelphia Phillies’ Phanatic.

Asked about the slight after an unrelated press conference, Gov. Tom Wolf called for peace among the mascots.

The Farm Show starts Saturday, Jan. 4 and runs for a full week.

Afterward, Butter Gritty and friends will be recycled into energy that will power a Juniata County Farm for several days.