ROCHESTER, NY (WXXI) – State lawmakers gathered in Albany Tuesday to push for passage of a bill they say can have a life-saving impact.

The “School Bus Camera Safety Act” authorizes the installation and use of photo monitoring devices on school buses to detect and record vehicles illegally passing or overtaking a school bus.

That’s something that happens 50 thousand times a day in New York, according to studies.

State Senator Rich Funke joined his colleagues in Albany to speak out in favor of the bill.

“School bus cameras are going to be one tool for local school districts to use if they so choose, to catch these lawbreakers,” he said.

The bill calls for a fine of $250 dollars levied against the registered owner of a vehicle detected by camera illegally passing a stopped school bus, but Funke wants the fine increased. 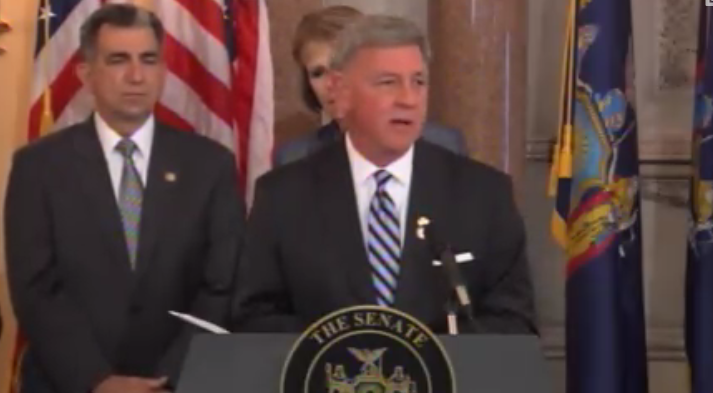 Sponsor in the Senate, Catharine Young, says the bill calls for school districts to recoup the cost of installing the cameras, and for districts and law enforcement to get a share of the fines collected.

She says every day, the lives of 50 thousand children in New York are placed in jeopardy.  And the problem with drivers passing on the right side of stopped school buses is mounting.

“This is where cars pass along the bus door where students enter and exit.  The New York Association of Pupil Transportation’s most recent survey found a scary level of 2,047 illegal right-side passes,” she said.

The parents of two families who lost their child to a driver passing a stopped school bus also spoke in favor of the legislation, saying it’s the right thing to do, and the legislation must pass.

A similar bill is currently in committee in the State Assembly.