ALBANY, NY (WSKG) – Leecia Eve, one of four candidates running in the Sept. 13 Democratic primary for state attorney general, believes her background makes her more qualified to hold the office than her opponents.

Eve is not well-known in a race where 40 percent of potential Democratic primary voters still don’t know the candidates. A recent Siena College survey puts her support at just 4 percent. 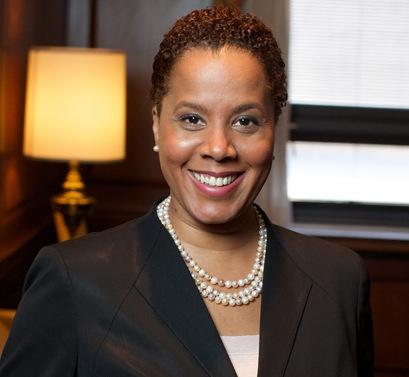 But Eve said voters are just tuning in now for the election to be held in less than a month, and she’s ramping up her campaign, buying air time for ads and releasing a digital video. The video features a quote from President Donald Trump at a campaign rally in late July, as Eve reads a passage from George Orwell’s book “1984.”

“What you are seeing and what you are reading is not what’s happening,” Trump says in the video in a clip from the July rally.

“The party told you to reject the evidence of your eyes and ears,” Eve then reads from “1984.”

“It was their final, most essential command.”

Eve said she truly believes things are that scary.

“We are living, sadly and frighteningly in Orwellian-like times,” Eve said. “And that is why I am running.”

Eve said the temporary attorney general, Barbara Underwood, is doing a great job pursuing legal action against Trump, including a criminal case against the Trump Foundation, and she said she’d continue and expand that work.

Underwood replaced Eric Schneiderman, who resigned as attorney general in May after he was accused of assaulting women that he dated. Schneiderman has said the incidents were consensual.

Eve said the position of New York attorney general is one of the most important brakes against the excesses of the Trump administration, along with special federal prosecutor Robert Mueller.

Eve is the daughter of the influential former Buffalo Assemblyman Arthur Eve, who served 36 years in the Assembly. Arthur Eve rose to become deputy speaker, the first African-American to hold the job.

Leecia Eve, who graduated from Harvard Law School, has forged her own career, working for Hillary Clinton and Joe Biden when they were U.S. senators. As an attorney, she said she defended citizens’ rights, including fighting for women in prison to be allowed to give birth without having to wear leg shackles.

Eve currently lives in Harlem, where she’s the vice president of governmental affairs at Verizon.

Even though she lobbies for one of the nation’s largest corporations, Eve said she’d happily pursue wrongdoing in the financial industry. One of her opponents in the primary, New York City Public Advocate Tish James, recently told the New York Times that she would not welcome the moniker “The Sheriff of Wall Street,” first earned by former Attorney General Eliot Spitzer.

Eve said she’s prepared to “go after bad corporate actors” and doesn’t understand why anyone would “equivocate” about that.

“The last thing that we need are corporations, whether within the financial services industry or outside of it, that are taking New Yorkers for a ride,” Eve said. “I would proudly wear the label of being the ‘Sheriff of Wall Street.’ ”

Eve also wants to make combating corruption in state government a priority. Former leaders of the Legislature and former close associates of Gov. Andrew Cuomo have been charged with corruption-related crimes, including bribery and bid-rigging related to state economic development programs. Eve said it was a “big mistake” for Cuomo to prematurely shut down a Moreland Act commission on corruption, and she said she’d use the powers of the attorney general’s office to go after corruption.

“New York is the poster child in the country for corruption,” said Eve, who added that as the daughter of public servants, that “angers” her.

Eve said she does not personally blame the governor, though, for the corruption, and said she plans to vote for Cuomo over his opponent, Cynthia Nixon, in the gubernatorial primary.

Eve worked from 2011 until 2013 as Cuomo’s chief economic development adviser. She left the agency before the current economic development corruption scandals occurred. Eve remains a commissioner of the Port Authority of New York & New Jersey, a post she was appointed to by the governor. And she said she’d be independent of the governor, if elected.

Another of Eve’s opponents in the primary, Zephyr Teachout, is seeking permanent criminal and civil referral for all sexual harassment cases in state government. Eve agreed with that idea, and said she had experience helping craft and implement the Violence Against Women Act when she worked for then- Sen. Joe Biden.

“I will aggressively investigate those allegations,” said Eve, who added that if the charges are proven true, she also will “aggressively prosecute them.”

The fourth candidate in the primary is Hudson Valley Congressman Sean Patrick Maloney.