They say “Lou for Senate” or “Lou Digs Coal.”

And on Hazleton’s main drag, that’s how a lot people talk about Republican Congressman Lou Barletta, like he’s a beloved neighbor.

Republican challenger U.S. Rep. Lou Barletta, makes a point alongside U.S. Sen.Bob Casey, D-PA, during a debate Saturday Oct. 20, 2018, in the studio of WPVI-TV in Philadelphia. Casey, 58, of Scranton, is seeking a third six-year term. Barletta, 62, of Hazleton, is in his fourth term in Congress. (AP Photo/Jacqueline Larma)

“When I see someone good like Lou, I’m in his corner 100 percent,” said Lauren Sacco, whose family owns three small businesses in Hazleton, including Frankie’s Pizza, right off the main drag. She went to school with one of Barletta’s daughters, and her family has known the Barlettas for decades.

“When you look at the Barletta family, they are deeply rooted in the word family and the sense of family,” said Sacco. “Great people, level-headed gentleman, one day I’d like to see him go even farther than where he’s going today.”

Barletta grew up in Hazleton, where he worked for his family’s road construction company before starting his own. He was elected mayor in 1999, and then became a U.S. congressman in 2010. Four terms later, he’s running for Senate against incumbent Democratic Senator Bob Casey Jr., who grew up in Lackawanna County, near Scranton, just a 40-minute drive away.

Hailing from neighboring counties in Northeastern Pennsylvania, the two major candidates are rooted in the same challenges, but are coming up with very different solutions.

Whereas Barletta supports expanding natural gas exploration, the use of coal and laments what he calls “excessive government regulations on the energy industry,” Casey stresses environmental protection and clean power sources.

While Casey has been a strong critic of President Donald Trump’s policies on immigration — showing up at  Philadelphia International Airport to join protests against the Muslim ban, and denouncing family separations — Barletta has the president’s endorsement, and he passed one of the country’s first local ordinances targeting undocumented immigrants.

That ordinance, which Barletta introduced in 2006 as mayor of Hazleton, would have punished businesses and landlords for employing or renting to undocumented immigrants.

Hazleton was 93 percent white at the time, but many Latino families were moving in for the inexpensive housing, and the new factory jobs at the edge of town.

Annie Mendez and her husband at the time were one of the first Latino families to move to Hazleton. New Jersey, said Mendez, had gotten too expensive. They were looking for a change and had visited Hazleton before during vacations to the Poconos. The couple soon opened a car repair shop.

“When we first came in the early 2000s, Hazleton was a ghost town,” she said. “A lot of the houses were in very bad shape, no businesses, everything was closing.”

Mendez is trained as a paralegal, so she began to help other Latino families adjust to life in Hazleton, translating paperwork, helping them pay their bills. At first, she thought Barletta would be an ally. He had some government documents translated into Spanish. It seemed like he cared.

But as the Latino population grew, Mendez noticed a shift in how Hazleton residents saw the newcomers.

“The bar in West Hazleton on Diamond, they had a big sign outside that said, ‘Only legals served here.’ No one had a big stamp on their face, ‘legal’ or ‘illegal,’ and everyone was discriminated. You looked different, you were part of the problem — not the solution,” she said.

Amilcar Arroyo, publisher of the local Spanish-language newspaper El Mensajero, counts Barletta as a friend. Born in Peru, Arroyo moved to Hazleton from Miami in 1989 after seeing an ad for a job packing tomatoes. He started the newspaper as a way of bridging Hazleton’s white and Latino communities, and through it, he met Barletta. The mayor asked Arroyo to translate city forms into Spanish, and they stayed close.

“I know his family. Other people when they talk about Lou, they know him only by what he says, but I know Lou the person,” he said.

But Arroyo agrees Barletta took advantage of the animosity around the town’s changing demographics for political gain.

“I never can talk bad about Lou as a person, but when we jump in the political arena, we are apart, but we are not enemies,” said Arroyo. “He’s a good guy. He’s not racist, I have to say it clearly, he’s not racist. But he’s a smart politician.”

The ordinance was never actually enforced. It was deemed unconstitutional. As a result, the city was ordered to reimburse the American Civil Liberties Union $1.4 million in legal fees, adding to Hazleton’s existing $6 million debt. To Mendez, that’s the final injustice: that Hazletonians, who are now nearly 50 percent Latino, need to pay for the consequences of Barletta’s action.

“So he was not good for Hazleton,” she said. “Remember what they say, divide and conquer. And that’s what he did, he used the hate and division to rise to power.”

Barletta’s supporters say the ordinance wasn’t about race, but a legitimate response to growing crime.

“Despite what everyone wants to admit to in this town, I think there was an overwhelming majority that thought it was the right move,” said John Keegan, a pharmacy owner. “It wasn’t the influx of Latinos, but the influx of gangs. It had been a quiet community, you could leave your house open, your car open, and that all just changed.”

According to a 2011 report from the U.S. Department of Justice, gang and drug activity did increase in Hazleton and all of Northeastern Pennsylvania in the early 2000s, but the report traces the increase primarily to gangs from the New York City metropolitan area, often with Dominican roots. It wasn’t clear that undocumented immigrants were to blame.

Hazleton did experience a huge surge in population, adding an estimated 10,000 people between 2000 and 2006. Today, the town is rebounding, largely thanks to the new Latino community and a surge in new small businesses.

But many of the newcomers, as Hazletonians call them, do not vote, said Arroyo. “If we come and vote, we can elect a mayor and an entire city council of the city of Hazleton, but we are not doing that yet,” he said.

Barletta was re-elected twice after passing the ordinance, each time with increasing margins. After losing bids for Congress in 2002 and 2008, Barletta ousted a longtime Democrat in 2010, in a midterm Republican wave two years after President Barack Obama’s election.

As a congressman, he refused to sign a continuing resolution to fund the government until he successfully secured FEMA funding for Luzerne County after the devastating floods from Hurricane Lee and Tropical Storm Irene in 2011. He also fought to maintain funding for after-school programs through 21st Century Learning grants, which had been cut by the Obama administration.

“As congressman, he got us more policemen who will help the budget, he got the fire department grants,” said Keegan. “Overall, I think he’s done a fantastic job.” 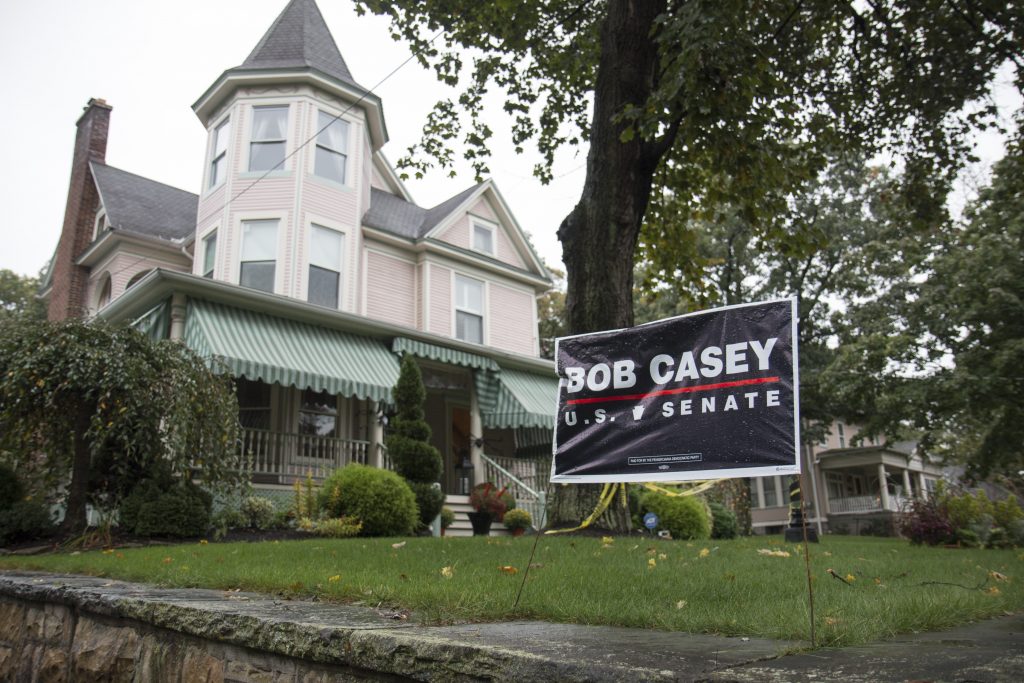 A sign of support for incumbent U.S. Sen. Bob Casey in the neighborhood where he grew up in Dunmore, just outside of Scranton, in Lackawanna County. (Jen Kinney/Keystone Crossroads)

Less than an hour from Hazleton, up Interstate 81, is Bob Casey’s hometown, Dunmore, just outside of Scranton in Lackawanna County.

Casey attended Scranton Preparatory School and returned after college to practice law here. Many of the streets in his childhood neighborhood are named for presidents: Madison, Monroe, Quincy, Roosevelt.

Casey grew up in a political family. His father, Bob Casey Sr., served in the Pennsylvania state Senate, as the state’s auditor general, and then as governor from 1987-1995. Casey Jr. also became auditor general, but failed in his bid to become the Democratic nominee for governor in 2002.

In 2006, he defeated incumbent Rick Santorum to become a U.S. senator and then held his seat in a 2012 bid.

But if Barletta’s critics know him primarily for one controversial policy, critics of Bob Casey here in Scranton struggle to point to any impact at all.

“I think he’s been around a long time, but he hasn’t done a lot to help the community,” said Joe Gorgol, a flight instructor in his 20s who recently changed his registration from Democrat to Republican. “It’s just all talk. He says ‘I’m from the area, I’m going to help,’ but all these people in Scranton are hurting.”

Helen Goehsler, an anti-abortion activist who opposes Casey’s support for Planned Parenthood, agreed. “There’s really nothing that stands out as a major accomplishment,” she said.

Goehsler felt very differently about Casey’s father. The Democrat, who staunchly opposed abortion, was challenged in court over a strict state-level anti-abortion act and won. Casey Jr. said he also opposes abortion, but his support for birth control and family planning has made him unpopular with groups such as  Goehsler’s, the Scranton chapter of Pennsylvanians for Human Life. 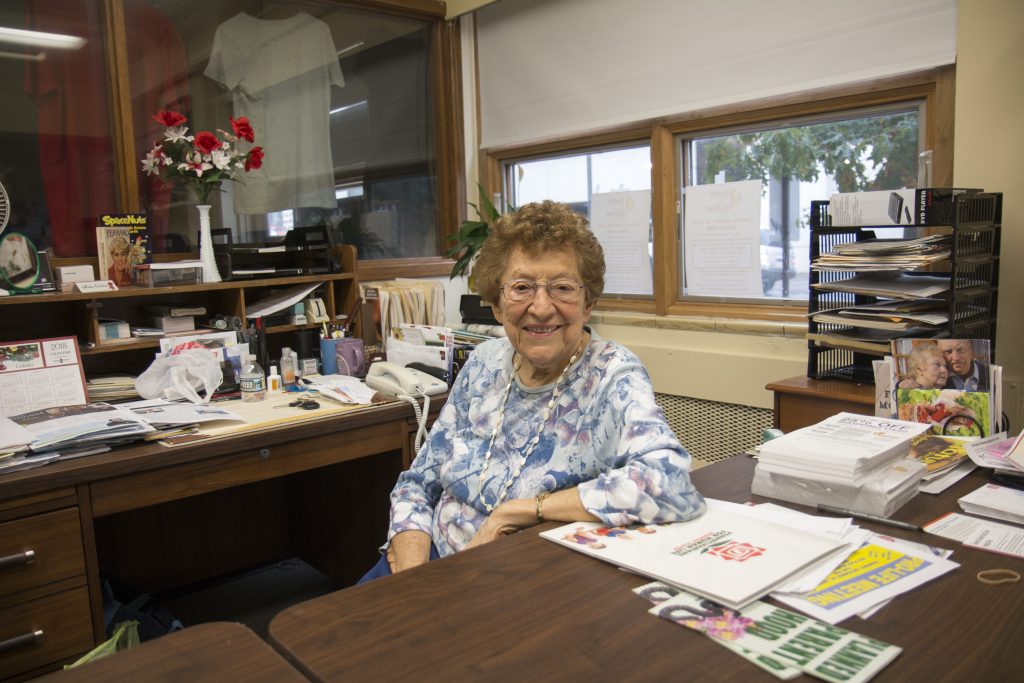 “I can’t say enough for Gov. Casey, I wish I could say the same thing for his son,” she said.

Father-son comparisons are unavoidable for the senator, especially around here. Charlie Lyons was a staffer for both men, and he says, for the most part, the Casey name is an asset.

“There is a reputation for integrity, for caring about what people feel and need, and for working hard for them. I think that has been consistent both through his father and through him,” he said.

In the past two years, Sen. Casey has become an outspoken critic of the Trump administration, a surprise to many, given his reputation as a mild-mannered politician. But to Lyons, it was a glimmer of Casey Sr.

“This is something he has in common with his father. There are certain issues and situations where you can see his passion coming out. A few of those areas are when it deals with children, or anyone who is vulnerable,” he said. “So when there are attempts to repeal the Affordable Care Act or cut Medicare in a way that will hurt children and families, he’s going to get riled up about that, and he has.”

Lyons also has no trouble pointing to Casey’s local accomplishments, though he admits they’re not exactly headline grabbing — more funding for infrastructure, support for local medical education, and contributions on a federal education bill.

“It’s not a high-profile sexy political issue, but he worked hard behind the scenes to make sure that Pennsylvania got its fair share.”

For Pat Clark, a member of the Friends of Lackawanna, it’s Casey’s willingness to meet with constituents that is most impressive. Clark grew up down the street from the senator, but only got to know him recently when seeking help on a local issue — opposing the growth of a landfill nearby.

Michele Dempsey and Pat Clark of Friends of Lackawanna stand in front of the Dunmore Reservoir in 2016. In the distance, you can see the Keystone Sanitary Landfill. (Jessica Kourkounis/For Keystone Crossroads)

“You know, there’s only 100 senators in the country — and to have an open door policy and actually listen to your constituents and act on it is so much more than a lot of people experience in government,” he said.

Most major polls have Casey ahead of Barletta by double digits. Money supporting Casey overshadows the same for Barletta by nearly $12 million. Casey has benefited from $1.6 million in outside support from political action committees. Barletta, though, has not attracted similar support, a sign that big outside funders don’t see him as a viable enough candidate.