ALBANY, NY (WSKG) – The Child Victims Act is scheduled to be approved in the  state legislature next week. Sponsors say they have fixed a perceived flaw in the legislation that opponents said could  provide a loophole for public schools in sexual abuse cases.

The Catholic Church recently pulled back on its long standing opposition to provisions of the Child Victims Act that end the statute of limitations for survivors to bring suits against their abusers. But church leaders said the measure, as written, might shield public schools and other institutions, like hospitals, because it did not change a law that says anyone filing suit against a public entity must file a notice of claim by 90 days after the incident.

Senate sponsor Brad Hoylman says he believes the measure supersedes that rule and would treat private and public institutions equally. But he says he and the Assembly sponsor, Linda Rosenthal, are adding clarifying language to the bill, to end any doubts.

“We’ll do everything we can to make it as explicit as possible,” Hoylman said. “That the bill is even handed in its application to both public and private institutions.”

The Catholic Church dropped all opposition to the bill Thursday night.

Assemblywoman Rosenthal, in a statement said “The horrific sins of past abuse can never be absolved, but the passage of the Child Victims Act will deliver an opportunity for accountability and redress that survivors in New York have never before had.” 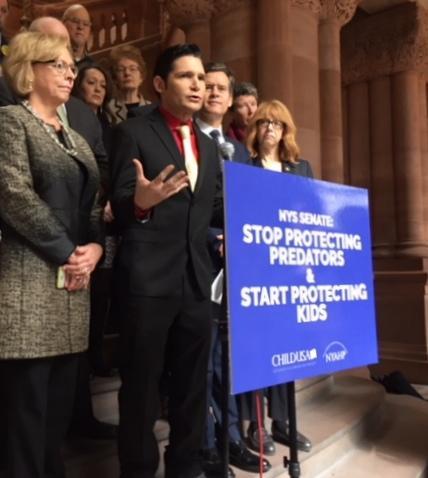 Actor Corey Feldman speaks with other survivors of childhood sexual abuse to lobby for the Child Victims Act at the State Capitol on March 14, 2018

Senator Hoylman says passing the law would give survivors some justice, and would also prevent future victims because the court actions would “out” alleged perpetrators  and remove them from situations where they interact with children.

“There’s a very important public safely component,” Hoylman said. “Through the rules of evidence and normal discovery, it  helps point out the fact that some predators may still be working in schools or have contact with children because they’ve never been identified as such.”

The bill is on the legislative calendar for Monday.

Cuomo says the “red flag” measure would police  to confiscate fire arms from a home if someone living there is determined by law enforcement, or school officials to potentially pose a harm to themselves or others. He also wants to extend the waiting period for background checks, if there’s any questions raised about the purchaser.

“It’s not for everyone,” Cuomo said. “It’s for people who don’t pass (the background check).”

The governor also wants to pass further measures against bump stocks, devices used to turn automatic weapons into machine guns.  The use of bump stocks are already banned in New York, the bill would bar the possession and sale of the devices.