KEYSTONE CROSSROADS — Rodrigo Ortiz has been trying to sound the alarm about COVID-19. At the end of April, he stood outside of a coronavirus testing site in downtown Chambersburg wearing a white face mask and turned on Facebook Live.

Vendors and shoppers don masks while at Lancaster Central Market on May 9, 2020. Kate Landis / PA Post

“There’s a lot of people who think nothing will happen to them, and keep getting together, keep having parties,” he said in Spanish into the camera, before imploring residents of the borough to stay home to avoid spreading coronavirus

“Sixty percent of people here are testing positive, and the majority are Hispanics,” he continued, with emotion.

Ortiz posted the video to the page for MILPA, a statewide grassroots advocacy group run by and for Latinx immigrants, where it now has more than 6,100 views.

In parts of rural Pennsylvania, there has been growing angst about Gov. Tom Wolf’s coronavirus shutdown plan. In places where case counts have remained low, some say the state isn’t acting fast enough to reopen the economy. But in pockets where COVID-19 cases have had dramatic spikes, the feeling is more cautious.

The county leans Republican politically, and is home to dairy farms, food production and warehouses that keep the local economy chugging.

Chambersburg, the county seat, is more densely settled and much more politically and racially diverse — around 12% of its 21,000 residents are African American, and 17% are Latinx, according to the U.S. Census Bureau.

In parts of the county, coronavirus feels like a far-away problem. In the borough, it’s hitting close to home.

In early May, the borough briefly landed in a list of the top 15 places where COVID-19 cases had the highest average daily growth rate, according to a national New York Times analysis. 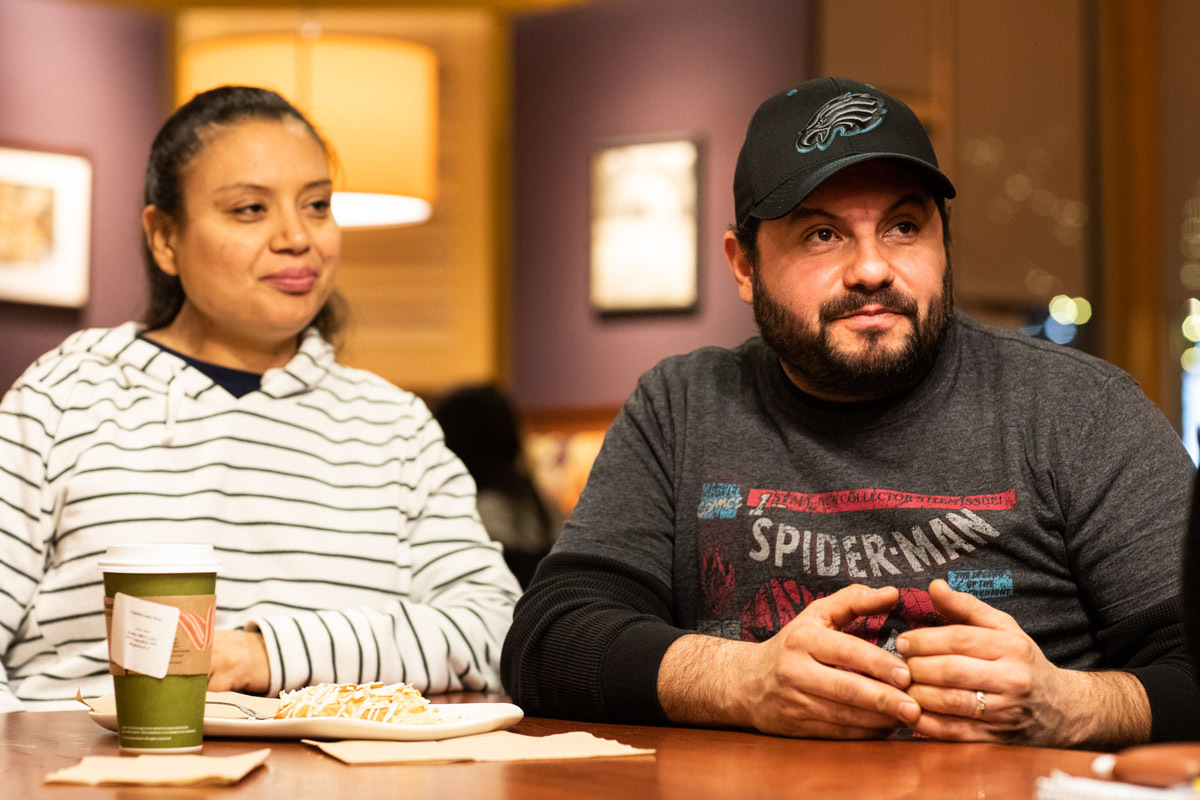 Ortiz and the other members of MILPA have been working around the clock to spread the word and convince people to stay home. He hands out masks on the street, and the group tapped a local network of churches to raise money for a kind of mobile food bank, aimed at slowing the spread of the virus.

“If you have coronavirus, you shouldn’t be showing up at a food pantry,” said Ben Raber, executive director of NETwork Ministries, who is helping with the effort, along with attempts to alleviate COVID-related hunger in the region. “We’re really trying to see to it so that nobody is going hungry,” he said.

Efforts to keep people home are undercut by messaging that the economy needs to reopen immediately.

Some local officials are agitating against the shutdown order, pointing out that case numbers in Franklin County are not on the scale of harder hit places, such as the Philadelphia area and New York City. Around 1% of Philadelphia County residents have tested positive, compared to around .36% in Franklin County.

On May 9, six local state lawmakers and one county commissioner signed a letter to Gov. Tom Wolf, stating their intention to move out of the state’s most restrictive “red” lockdown phase.

“Franklin County has met the requirement of your original stay-at-home order, which was to flatten the curve of the COVID-19 outbreak and allow hospitals time to gear up,” they wrote, announcing businesses could begin opening May 15.

In response to the letter and others from around the state, Wolf said he could withhold funding from counties that don’t cooperate and pull the licenses of scofflaw businesses.

“I am just really troubled at how quickly we’re willing to surrender our rights,” said State Senator Doug Mastriano, a Republican who serves four counties who penned and signed the letter. He said the uncertainty around how long the shutdown order will last troubles some of his constituents.

While the authority of officials who want to flout the state order is limited, he said, “basically what we’re saying is, ‘Businesses, we’ll let you decide what to do.’”

Mastriano, who has been a leading voice at shutdown protest rallies in Harrisburg, has called for the resignation of Pennsylvania Health Secretary Rachel Levine.

Several key figures in Chambersburg’s local government have not signed Mastriano’s letter, and are giving the opposite advice.

Mayor Walt Bietsch issued his own responses, saying, “While the appropriateness of the ‘red’ phase designation is subject to debate, local elected officials do not have the authority to independently permit non-waivered businesses to open.”

The two county commissioners who did not support bucking the shutdown order also weighed in. “We, too, are frustrated with the restrictions surrounding this crisis,” wrote commissioners Dave Keller and Robert Ziobrowski. “But, we do not believe it is in the best interest of our residents or our businesses to act against the Governor’s Office protocol.”

Borough Council President Alice Elia said the mixed messages have led to some confusion and questions from residents and business owners, asking can we reopen or not?

“I felt that it was really important to clear that up,” she said. Because the borough is harder hit than much of the surrounding area, “it’s extra important that our residents maintain social distancing, wear their masks and stay home,” said Elia.

There are several factors that could contribute to why the borough has more cases than surrounding areas, according to Elia. It’s denser, contains some nursing homes, and is home to more people of color who, nationally, are coming down with the coronavirus at disproportionate rates.

“I do worry that not only in Chambersburg but around the country … we’re going to have pockets of people who are stigmatized,” she said.

Keystone Health, the federally qualified health center that runs the testing site in downtown Chambersburg, declined to verify the demographics of who is testing positive.

Ortiz said there are other factors as well. In the Latinx community, he said many people are still going to work in essential industries, and families live in close proximity. There was also a lack of clear guidance and an abundance of misinformation on social media, and as a result, a slow adoption of social distancing processes.

There are many people who are afraid, or who don’t want to pay so they don’t go to the doctor, according to Ortiz. That’s why MILPA has tried to get the word out that testing at Keystone Health is free.

A group including nurses, business owners, church leaders and MILPA members put out a public service announcement called “Stay at Home,” asking people to take warning about the coronavirus seriously.

Since the recent spike in cases, the numbers have plateaued in Franklin County, according to the two local health care providers, Wellspan and Keystone Health.

The hope is that clear communication efforts will help keep driving the trend downward.