The president spoke at the Giant Center in Hershey, just hours after Democrats in the House detailed the charges they hope to take to the Senate to remove Trump from office.

Trump brought up impeachment soon after taking the stage, but he linked it to a key campaign issue — jobs and the economy. The president called impeachment a “silver lining”: It “embarrassed” Democrats that they announced their support for a key Trump agenda item — a new U.S.-Mexico-Canada trade deal.

“Any Democrat who votes for this sham,” he said of impeachment, “is voting to sacrifice their House majority, their dignity and their career,” the president said. 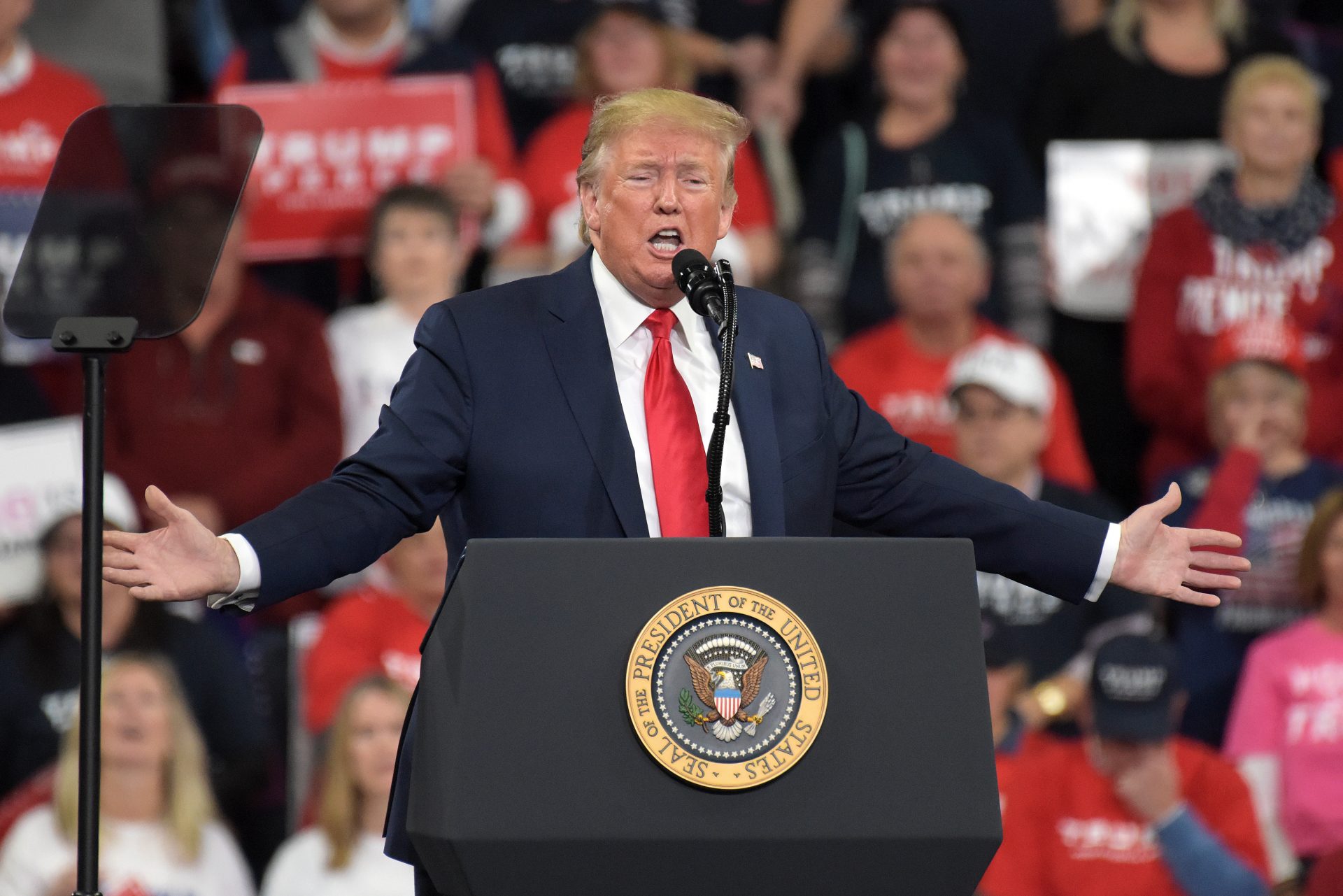 In his speech the president repeatedly hit on economic themes, boasting of the roaring stock market, the low unemployment rate and new investments in the energy sector, a key industry to many Pennsylvania voters.

At multiple points, Trump digressed from prepared remarks to engage in asides. In one, he declared that “Russia wishes Hillary Clinton won,” an assertion that isn’t shared by the U.S. intelligence community which concluded that Russia actively interfered in the 2016 election to benefit Trump.

Jumping from Russia to energy, the president joked that if Clinton had beaten him in 2016, the country would be covered with windmills that would “knock out birds left and right.”

Matt Smith for WITF/PA Post. Visitors gather at the main entrance before a 2020 campaign rally for President Donald Trump on Dec. 10, 2019, at the Giant Center in Hershey, Pennsylvania.

The president’s speech drew thousands to Hershey. Hundreds showed up well before the president’s scheduled appearance, forming long lines in the light rain that fell across the central part of the state on Tuesday.

Attendees waiting outside said they were unfazed by the impeachment news in the nation’s capital, saying none of the revelations of the past weeks of hearings did anything to weaken their support for the president.

“With everything that he’s going through, I think he needs some extra support and I’m here to give him that support,” said Heather Ghali from Bucks County.

Christi Gensler, a hairdresser from Lebanon County, said she trusted the president.

“There’s so much hidden from us. I mean, I’m just a hairdresser in little old Fredericksburg, Pennsylvania. You know? It’s like, will we ever know the truth of what happens here or there because we hear so many stories,” she said.

Before the scheduled 7 p.m. start time, the 10,500-seat Giant Center was largely full, except for a small section of seats high and behind the main speaker’s podium. Hundreds more attendees stood on the half of the main floor not taken up with the stage and positions reserved for television cameras and the media. 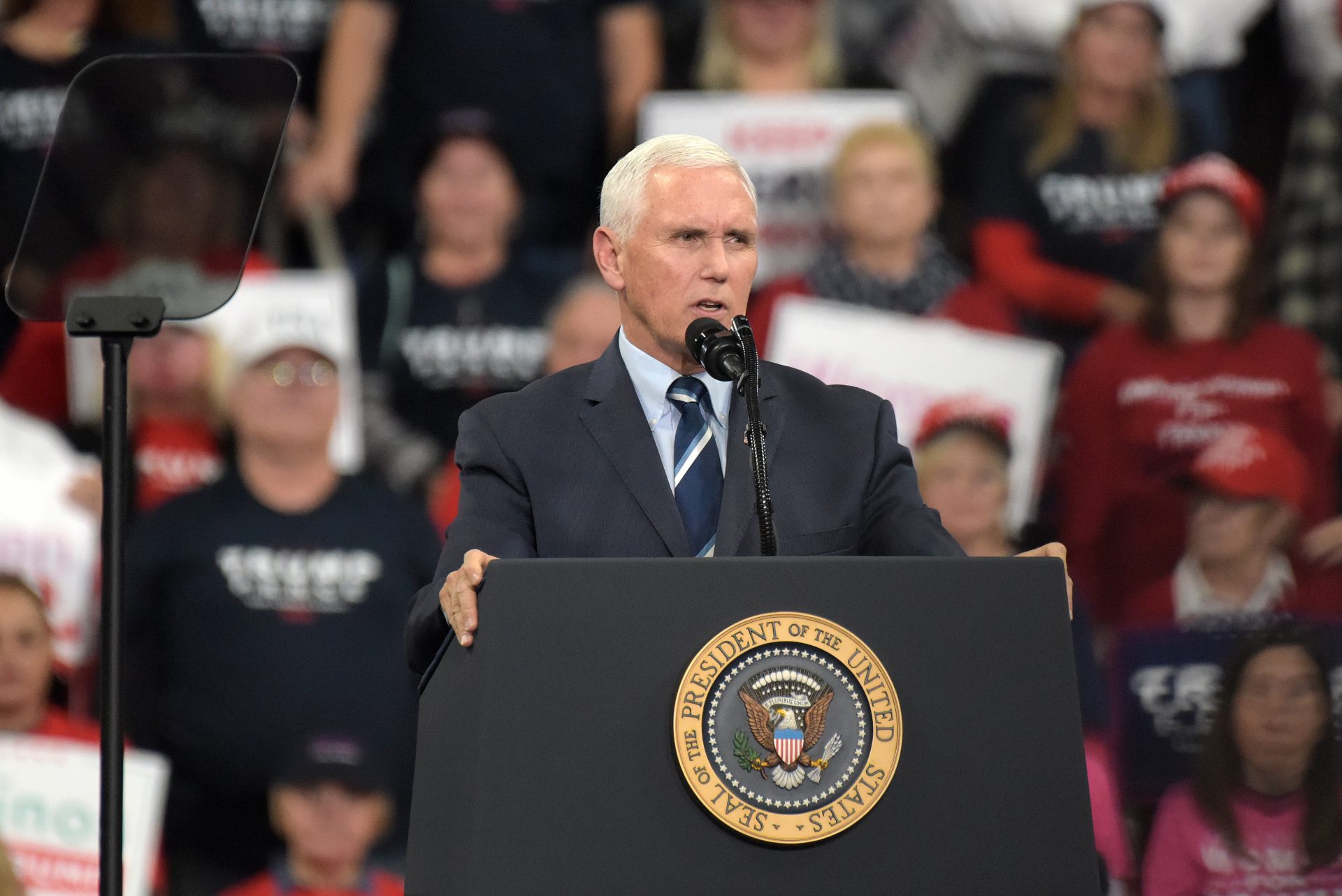 Vice President Mike Pence took the stage just after 7 to introduce the president. In his brief remarks, Pence pumped up the crowd, hammering home how Trump is delivering on economic growth and conservative policies like appointing “principled, conservative” judges to the federal bench.

“Pennsylvania will vote for four more years of Donal Trump in the White House,” Pence said. Referring to Democrats’ impeachment efforts, he said, “They know they can’t defeat this president. They can’t run against his record.”

Pence had traveled to Hershey by bus after stopping early in the day at a “Veterans for Trump” rally in Rochester, in western Pa.’s Beaver County.

“President Trump is the real deal. Together with this man we will keep America great,” Pence said.

The president entered the main arena at 7:23 p.m. as Lee Greenwood’s patriotic anthem “God Bless the USA” played over the sound system.

Early in his remarks, a woman in the crowd began to protest. Trump responded by saying, “Get her out,” multiple times.

The president urged the crowd to turn out in next year’s election, promising that if they did he and Pence would win Pennsylvania again, “but even bigger.”

Trump called seven of Pennsylvania’s nine Republican members of the House up onto the stage with him at one point (missing were Brian Fitzpatrick and Guy Reschenthaler), saluting them as “warriors” and rallying the crowd to give Republicans back the majority next year.

Trump also took shots at the Democrats seeking to run against him, mocking former vice president Joe Biden’s gaffes on the campaign trail. “Biden keeps saying he’s in the wrong state. What is wrong with this guy? There’s something wrong.”

And while talking about illegal immigration, the president blasted Philadelphia District Attorney Larry Krasner without using his name, alleging Krasner was guilty of releasing MS-13 gang members from jail who went on to commit more crimes against citizens.

“You better get yourself a new prosecutor,” Trump said.

Jane Roh, Krasner’s communications director, said Tuesday evening that she had not seen the president’s remarks. But this is not the first dispute between Krasner and Trump. In a statement last week, Krasner told The Philadelphia Inquirer he was “honored once again to be attacked by President Trump, the most criminal U.S. president of my lifetime … .”

Near the end of his remarks, the president ticked off his accomplishments, earning the loudest crowd responses when he mentioned his opposition to abortion and his decision to move the U.S. embassy in Israel to Jerusalem.

Earlier, Air Force One arrived at Harrisburg International Airport at 6:19 p.m. According to the White House, he was greeted on the ground by a number of local elected officials, including state Reps. Sue Helm, R-Dauphin County, and Greg Rothman, R-Cumberland County, two Dauphin County commissioners, and the two top officers from the 193rd Special Operations Wing of the Pennsylvania Air National Guard.