HARRISBURG, PA (WSKG) — Voters in the May 18 primary will get to weigh in on two ideas to change how different branches of state government could exercise their powers during an emergency.

Both of them would amend Pennsylvania’s constitution. One would limit a governor’s disaster proclamations to three weeks at a time, while another would make it easier for state lawmakers to vote them down.

Both are more broadly seen as one of the first official referendums on the Wolf administration’s handling of the pandemic, which has drawn the ire of many statehouse Republicans and a mix of adulation and defense from Democrats.

“This is maybe in my 22-year career one of the most important issues that Pennsylvanians have ever had to weigh in on, and that is the balance of power of government,” state Senate President Pro Tem Jake Corman (R-Centre) said.

Since last year, Democratic Gov. Tom Wolf has defended the executive actions his administration took to limit the coronavirus’ spread. He’s pointed to the constant data drops and public appearances he and other agency leaders have made throughout the pandemic as evidence of his transparency.

That’s despite the fact that the administration was broadly using the Disease Control and Prevention Act to avoid answering Right-to-Know requests that would have more clearly revealed the governor’s decision-making process.

The whole time, Republicans have railed that he was acting unilaterally. GOP lawmakers and leadership claim they were trying to get more involved in that decision-making process. They asked for detailed COVID-19 data and meetings with administration leaders, which came in dribs and drabs.

That fight ultimately yielded the two emergency powers ballot questions voters will make their decisions on in May. The question both of them are asking boils down to this: who gets to say how the state reacts to an emergency?

“I see it as kind of the next move that frustrated legislatures would make in this kind of chess game that they are playing with the governor,” said Dr. Clifford Bob, a political scientist and author at Duquesne University.

Bob said he’s been studying the amendments and the political energy building around them for some time. In his view, a showdown over emergency powers was inevitable, not only because lockdown orders and other pandemic precautions are unusual on their own, but because restrictions have been handed down by the executive branch in one form or another for so long.

“That’s an extraordinary act in a democratic society,” Bob said. “We don’t normally allow our executives to rule by decree, essentially. We only allow it in the most extreme circumstances.”

It’s for that reason the pandemic has managed to spark a national conversation about the question of how much power a state’s executive branch should be allowed to wield during an emergency — and for how long.

The Associated Press reports 45 states, both red and blue, are mulling new limits on emergency declarations and giving greater oversight power to state lawmakers. The National Conference of State Legislatures says 11 have already done it.

But from Pennsylvania Emergency Management Agency director Randy Padfield’s point of view, setting up new rules for emergency power in the commonwealth would do more harm than good.

“Making wholesale changes to a process that has served us well because of a perceived need to limit the governor’s executive authority in response to an overwhelming global pandemic, the likes of which we haven’t seen in 100 years, is shortsighted and potentially reckless,” Padfield said earlier this month.

Right now, a governor gets 90 days to mobilize the state’s resources, adjust regulations, and get federal help under an emergency declaration. Wolf has extended the one combating COVID-19 four times. 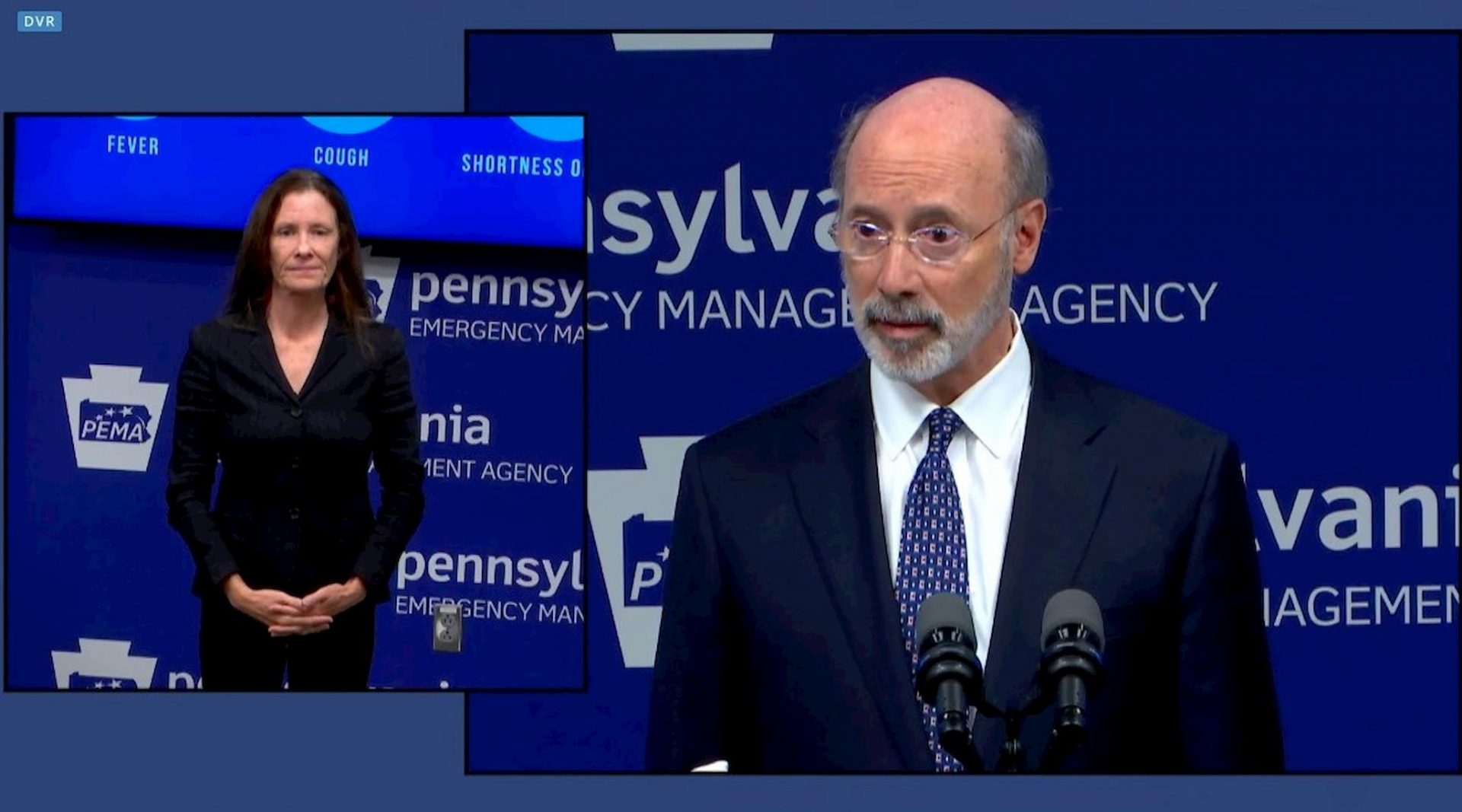 Screenshot from Gov. Wolf livestream. Gov. Tom Wolf answers questions from the press during a May 29, 2020, press conference in Harrisburg, Pa. Wolf was meeting with the press in person for the first time since March.

If voters approve one of the amendments on the ballot, the governor would get three weeks to do that. Once that time is up, he or she would have to go before state lawmakers and justify the emergency response. With a simple majority vote, they could keep the emergency rules in place or toss them out.

Under the other proposed amendment, both Republicans and the state Attorney General’s Office agree lawmakers would be able to essentially cancel emergency declarations outright.

Ryan Costello, a former Republican congressman who’s eyeing a U.S. Senate run, is lobbying for yes votes. He argues those changes would keep the two branches better in check.

“This does not kneecap the governor such that the governor isn’t able to operate as an executive,” Costello said. “It just requires that after a certain period of time, he has to go to the legislature to explain the who, what, where, why and when aspects of it.”

Costello and others haven’t clearly answered why lawmakers chose 21 days as the magic number. But for him, it’s not important.

State Senate Minority Leader Jay Costa (D-Allegheny) said the measures would make emergency response more complicated. Legislators would have to meet every three weeks and agree on the emergency, both of which have been difficult to do consistently during the pandemic.

“There’s significant compromise that would have to occur, and everytime you compromise emergency situations, you lessen the public safety in my view and I think it lessens the ability for them to do what needs to be done,” Costa said.

He points to the COVID-19 Vaccine Joint Task Force — something lawmakers and the Wolf administration created so they could collaborate on how to speed up vaccine distribution and access.

“Working together collaboratively, we were able to solve a problem of immense importance together,” Corman said. “That is an example that we should move forward with, not an example of one person making all these decisions.”

Lawmakers can already overturn the governor’s emergency declarations with a resolution. Though he or she can veto it, they can press ahead with a two-thirds vote.

House Democratic Leader Joanna McClinton said that acts as a safeguard, and for good reason: the legislature, she says, needs to stay out of the governor’s way in an emergency.

“We are not 253 governors,” she said. “I don’t have state troopers. I don’t have the ability to declare an emergency and get National Guards, so I respect the governor’s process.”

Many states give their chief executives between five and 60 days to tackle emergencies. That makes Pennsylvania an outlier in offering 90 days. But as PEMA head Randy Padfield argues, that timeframe works well for the commonwealth in getting people and supplies to where they’re needed most.

Changing it now could affect more than the pandemic rules.

“It also has the potential to adversely affect the landscape of emergency management operations for years to come, at a time when disasters and emergencies are becoming increasingly complex and the threats and hazards continue to evolve,” Padfield said.

Sen. Ward said the looming threat of future emergencies is a reason to involve the legislature more.

“If you look at the situation and how it can happen again, you want the legislature which is closest to the people at that table,” she said. “We want to help. We want to have a seat.”

If you want to vote on these and the two other ballot questions up for consideration, you’ll need to register to vote by May 3. To vote for a political party’s candidates in a primary, you have to be registered as a member of that party. But anyone, regardless of party affiliation, can vote on the ballot amendment questions.