ALBANY, NY (WSKG) – Supporters hope that their efforts to change an 80-year-old law that excludes farmworkers from many of the protections afforded to other workers in New York, may finally meet with success in the all Democratic-led State Legislature. 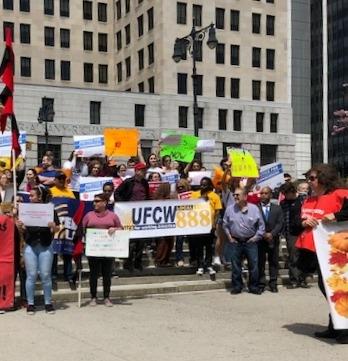 Farmworkers and their allies rallied at the State Capitol for a bill that would grant collective bargaining rights to about 80,000 to 100,000 seasonal and full-time farmworkers in New York state. It also would guarantee an eight-hour workday, overtime pay and at least one full day off each week. The workers also would obtain legal rights to unemployment insurance or workers’ compensation benefits.

Sen. Jessica Ramos, who spoke at the rally, said it’s an attempt to right a wrong committed over 80 years ago. In 1938, President Franklin D. Roosevelt and Congress established the Fair Labor Standards Act. It created the first-ever minimum wage and the right to time-and-a-half pay when a worker works over 40 hours a week, among other things. But farmworkers were not included in the act.

“We haven’t really prioritized them as the workforce and the backbone of the agricultural industry that they are,” Ramos said. “I’m hoping that we can help them out and do the right thing.”

Ramos hopes the bill will pass before the session ends in June. She said her bill has 32 co-sponsors in the Senate, the minimum number needed for a measure to pass. It has been approved several times in the state Assembly, where Democrats rule. And Gov. Andrew Cuomo said he’ll sign it if it passes both houses.

“We have done the work of holding three hearings across the state in three of the major farming regions,” said Ramos, who added she wants to see farmworkers’ rights “finally codified.”

The state’s Farm Bureau is against the measure. Member Jim Bittner runs Bittner-Singer Orchards, a 500-acre farm along Lake Ontario in Niagara County that grows apples, peaches, plums and cherries.

Bittner said all of the fruit is handpicked. When the crops are ripe, everyone — including himself, his eight full-time workers and up to 30 seasonal employees — work long hours. He said if he limited workdays to eight hours during harvest time, they might not get the crops picked.

Bittner said his orchards did not make a profit during the past two years; prices for fruit are down. He said they did break even, but the money isn’t there to pay significant overtime. He also doesn’t believe his workers would be happy working under those rules.

Bittner said larger farms like his are already required under state law to provide unemployment insurance and workers’ compensation benefits. But he believes very small farms would have a hard time affording the programs.

He said there is “room for discussion” about whether to allow farmworkers to collectively bargain with employers, but he also worries that unionized farmworkers might strike during harvest time.

“If all of a sudden you had a livestock farm and everybody went on strike, these animals are not going to be cared for, and there could be some serious issues there,” Bittner said.

Ramos said the bill’s supporters do not want to harm the agricultural industry. She said it’s in the best interest of both farmers and their workers for the farms to thrive.

“Obviously if you want to help the farmworkers, they are going to need to work in an industry that is vibrant,” said Ramos. “But what we don’t want is for an industry to completely make a profit off the backs of workers who don’t have the right to a day off or overtime pay.”

If the measure is approved, New York would join other states that have granted more rights to farmworkers. California instituted overtime pay and other protections for its state’s farmworkers, beginning in January of this year. Minnesota changed its laws on overtime pay for farmworkers in 2012.