FEMA workers toured the area in November. But ultimately, it was decided that the overall damage was not enough to warrant individual aid to residents and businesses, based on the number of homes and businesses affected by the storm.

“What numbers were they looking at?” Picente said. “Because our numbers are pretty significant in terms of the millions of dollars of loss in this community and the hundreds of people who have been displaced, who are still not back in their homes. At what point is the federal government going to send us a lifeline?”

“Focusing on furnaces, hot water tanks, things that would get them back into their homes,” Picente said. “In a few cases it’s enough. In many, it’s not.”

Picente wrote a letter to President Donald Trump, asking him to consider ways to award federal funding on a county-by-county basis.

It’s unacceptable that the federal government has denied our request for individual assistance for the residents affected by the Halloween 2019 storm and floods, and I’m demanding @FEMA provide a detailed explanation on the denial. 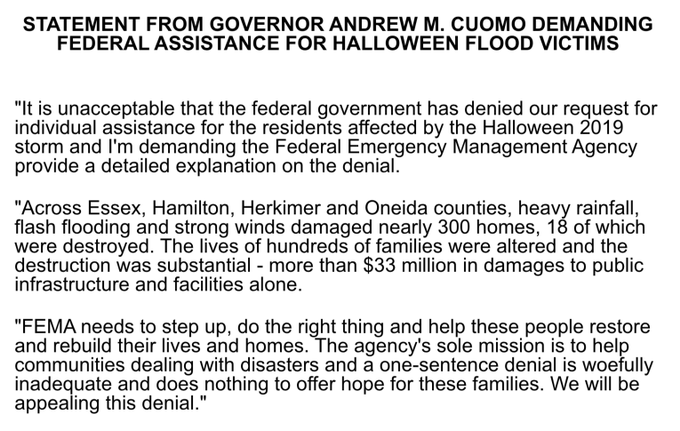 104 people are talking about this

I am extremely disappointed by FEMA’s decision. I have spoken with numerous families in our district who have lost their homes and businesses. My office will immediately work to ensure we address this directly with FEMA & advocate for families of #NY21.https://www.wktv.com/content/news/FEMA-denies-individual-assistance-to-victims-of-Halloween-floods-566661591.html …