TRANSFORMING HEALTH  — Athletic Director Jim Gross was in his office when he realized something was wrong.

It was October 25, a Friday night, and the North Schuylkill Spartans were hosting the Pottsville Crimson Tide with a league championship on the line. As Gross had done many times, at halftime he took the cash from ticket sales to his office for safekeeping. 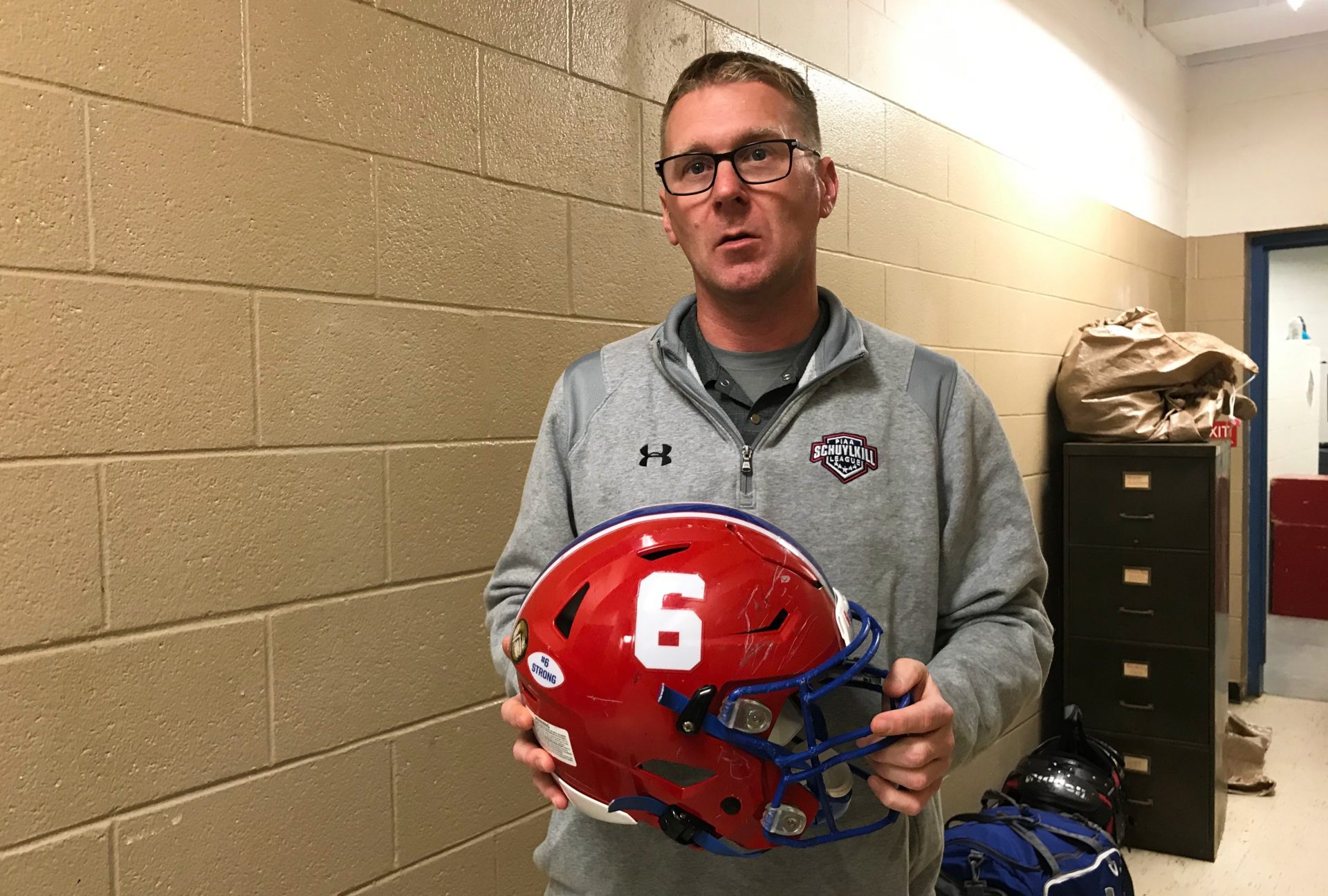 Taking a moment to warm up before heading back out to the field, Gross turned on a livestream of the game only to find it was no longer being broadcast. He sent a message to the scorekeeper, who said the Spartans’ quarterback, senior Jaden Leiby, had been injured, and it looked bad.

Later on video, Gross saw what happened. Leiby, who also played defense, lunged to tackle an opposing player. As the opponent ran forward, Leiby hit head-first into his thigh.

“Jaden just fell back and never made an attempt to get up,” Gross said. “I get emotional thinking about it.”

Leiby was taken by ambulance to a nearby field, where a helicopter flew him to Lehigh Valley Hospital-Cedar Crest. There, doctors found the 18-year-old’s neck was broken. Leiby went into emergency surgery.

It wasn’t the only severe injury at a high school football game that night in Pennsylvania. In York County, Kennard-Dale senior lineman Patrick Maloney was hit near the end of a game against Eastern York. Maloney walked off the field, but soon collapsed on the sidelines. He was flown to Penn State Hershey Medical Center in critical condition.

Everyone agreed: The players’ injuries were tragedies. Whether to see those and other injuries experienced every year by athletes as unavoidable, or a call to action to make changes to youth and high school football, is a discussion that has been playing out in youth leagues, courtrooms and some state legislatures across the country.

According to a recent New York Times report, high school participation in tackle football has fallen more than 10 percent since 2009. Enrollment in Ohio dropped 27 percent, while New York saw a 28 percent drop.

Pennsylvania is one of three states, along with Mississippi and Alabama, that bucked that trend. Pennsylvania enrollment increased 2 percent during the same period.

There are many reasons that fewer children are playing football, but the big one is the increasing concern over chronic traumatic encephalopathy, said Chris Nowinski, a former Harvard University football player and former WWE professional wrestler who heads the Concussion Legacy Foundation. The degenerative brain disorder, which affects mood, behavior and thinking, was identified in the brains of deceased National Football League players in 2005, sending shockwaves through the NFL.

Nowinski, a behavioral neuroscientist, said repeated hits to the head, such as those common in football, can lead to the disorder, also called CTE. Every year a person plays the game, the risk for developing CTE increases by 30 percent.

Nowinski is pushing to ban tackle football for children under 12 and to limit the total number of years a person can play the support, efforts that would help to prevent CTE, he said.

He’s not alone. Six states have considered outright bans on youth football. None have passed, though California enacted a law that limits the duration of full contact practice, bans off-season full contact practice, and requires a medical professional and an observer with the authority to remove injured players to be present at all games.

Nowinski said safety measures like these are good steps, but they fail to address high school, where the most severe injuries often happen, and they fail to prevent repeated head hits that he says are a fundamental part of the game. And many improvements, such as better helmets and training, don’t always make their way to the youth and high school levels.

“It’s important to appreciate that you could start in high school and play in college and make it to the pros and only play nine years,” Nowinski said. “And there are children today who play from age 5 to 14 and play nine years, and our evidence today shows that they’re equally at risk for CTE.”

In other cases, people are taking legal actions. Last month in Lancaster County, the parent of one former youth football player sued her son’s coaches for letting him play after getting kicked in the head during a game, according to a recent LNP report.

That family isn’t alone. Class and individual suits against youth leagues have been on the rise since 2016, according to American Bar Association Journal. 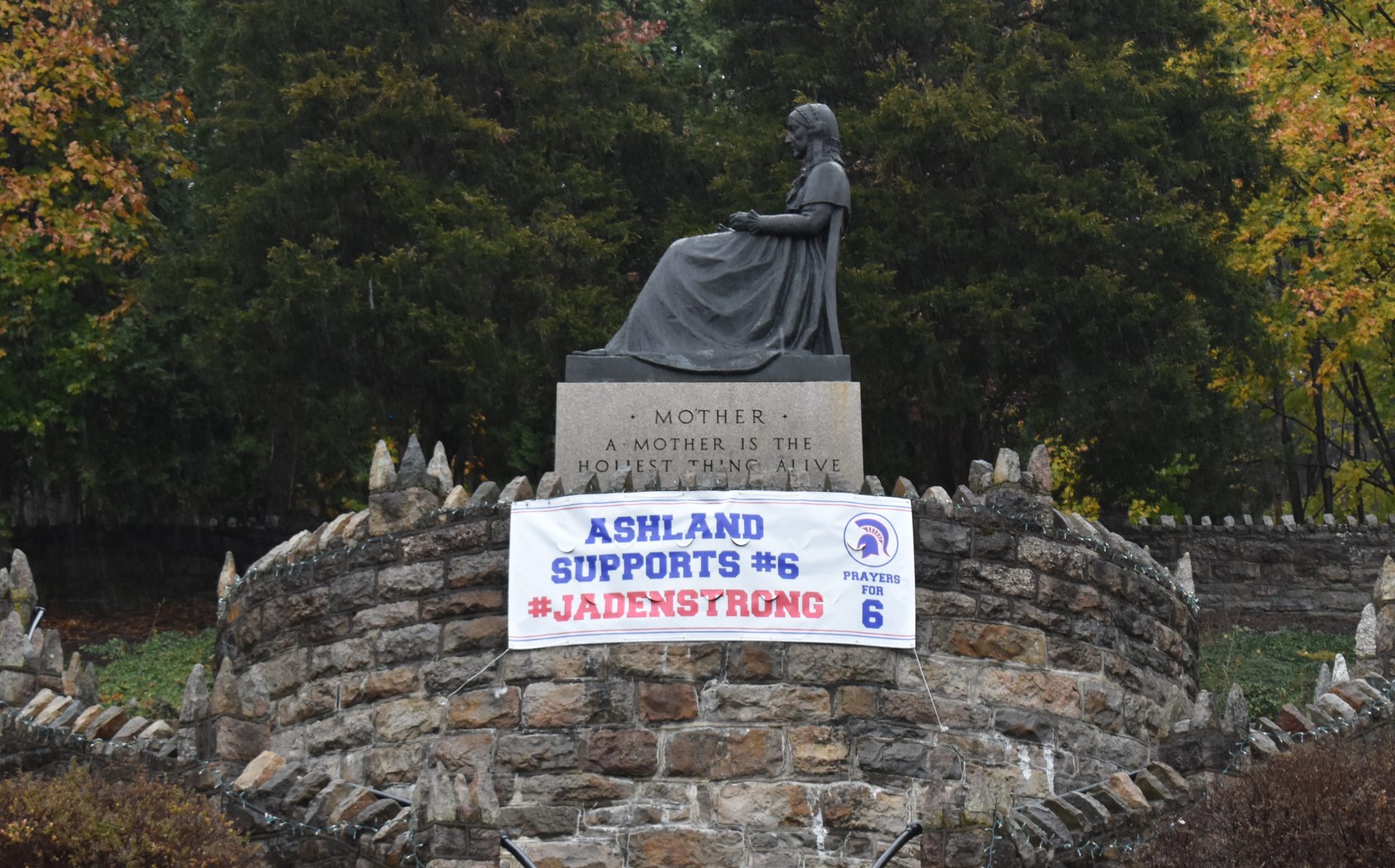 These measures show changing attitudes toward what is an acceptable level of risk in a game where the frequency of head and neck injuries dwarfs that of other sports.

High school football players suffer 34 concussions per 100,000 plays, according to the National Center for Catastrophic Sport Injury Research, also included in the NYT report. That’s twice the rate of hockey players and three times that of soccer players. Injuries to the knees, hands and ankles are also far more common in football compared to other sports, the research states.

Compared to years past, the game has never been safer, Harbaugh said. The former Red Lion High School and Lebanon Valley College player can remember when someone could have a concussion during the first half of a game, “and if you could count fingers, you might go back the second half.”

Brett Sholtis / Transforming Health. The North Schuylkill Spartans gather on the field after their season-ending loss to the Tamaqua Blue Raiders, two weeks after the Spartans’ quarterback, Jaden Leiby, broke his neck during a play.

These days, concussion protocols are keeping players safer, said Harbaugh, who served on the NFL’s head, neck and spine committee. He pointed to annual surveys from the National Center of Sport Injury Research, which he said show that safety measures are working. He noted that two deaths last year were directly tied to high school football, with another four football-related deaths caused by underlying heart conditions. 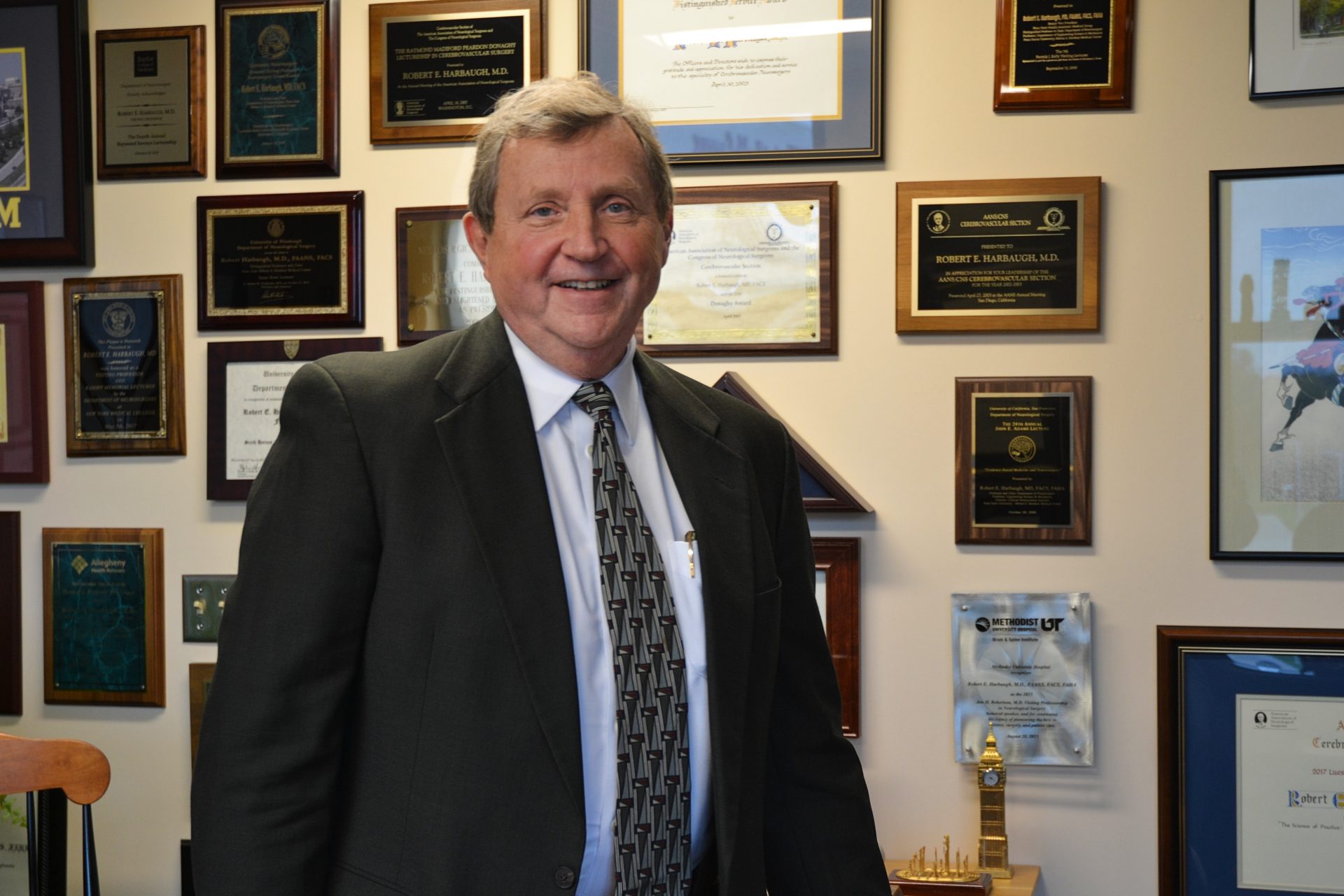 “But when you think that there’s millions of people playing football, that’s an awfully low risk,” Harbaugh said. “But if it happens to you, it’s just tragic.”

Harbaugh himself had three concussions, as well as a career-ending knee injury that bothers him to this day.

If he could go back, he said, he wouldn’t hesitate to endure those injuries again.

“I think I learned so many good lessons from playing football that it was certainly worth the injuries,” he said. “And it’s the spirit of being part of a team.”

In Ashland, Gross remembered the team spirit of youth football and high school basketball. Gross’s football career ended at age 12 with a fractured hip that doctors said would bother him later in life. Now at age 47, he’s about to take time off for hip replacement surgery.

To understand football in Schuylkill County, you have to understand the people and the region, he said. He described it as a blue collar area, pointing out that coal mining used to be the predominant source of jobs.

For Ashland and surrounding towns, high school football brings the community together after a week of hard work, he said. “Your friends are there. Your neighbors are there. You’re getting your supper there. Friday nights, a good majority of that town is going to be at that football game.” 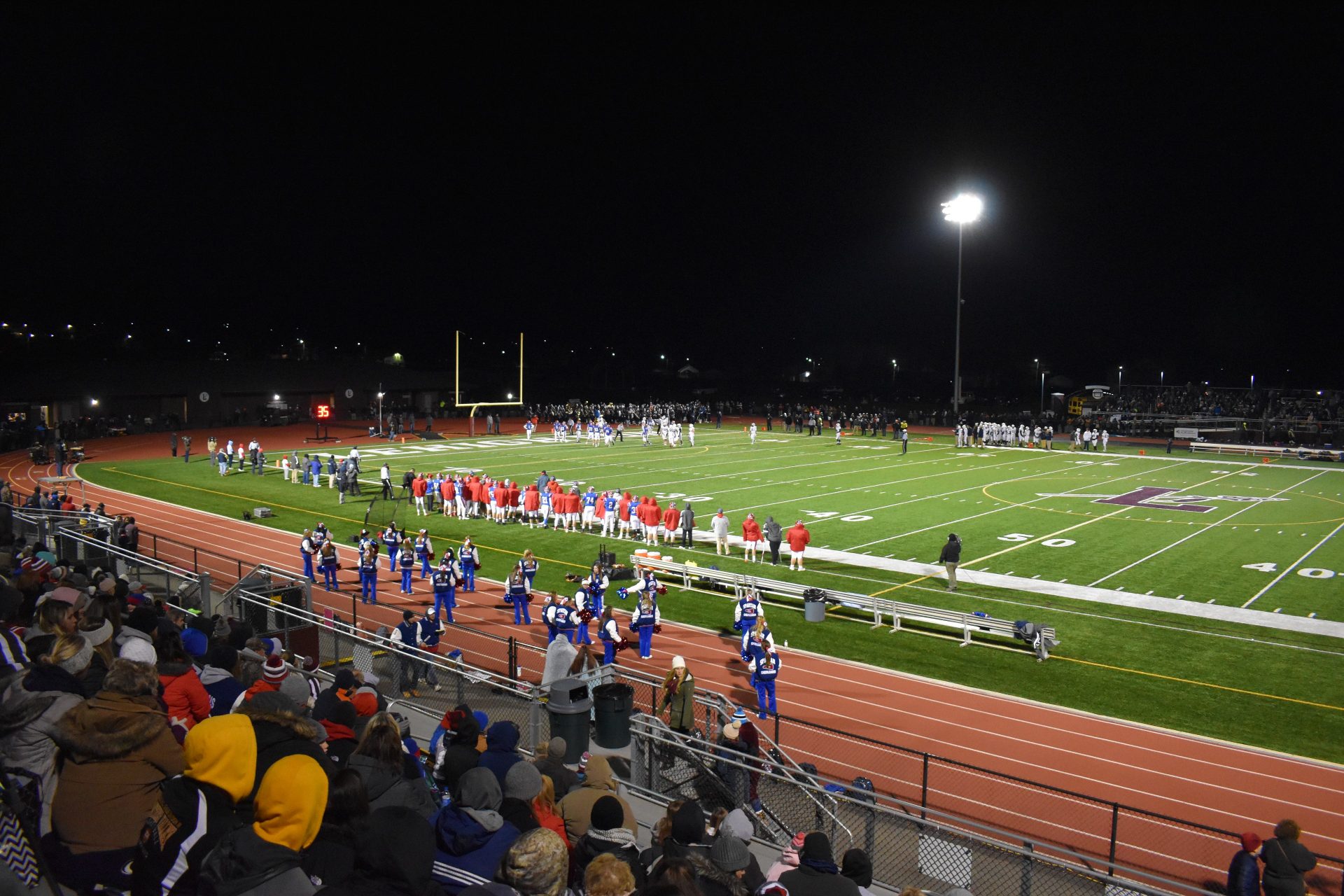 Brett Sholtis / Transforming Health. Fans in Lehighton endure the bitter cold weather as they watch the division championship game between the North Schuylkill Spartans and the Tamaqua Blue Raiders.

He said Jaden’s injury is the worst he’s seen in more than a decade at his job, but it’s no reason to change the way football is played.

“Playing this sport has so many benefits for them,” Gross said. “Being active, being involved, skills that you can use in the real world.”

Still, Jaden’s recovery is uncertain. The community will rally around him, Gross said. And long after the media attention fades, he will get whatever help he needs.

Gross hopes that safety measures will continue to improve, and noted that the school continues to change to respond to the growing science about concussions.

“I think it’s a dangerous sport,” Gross said. “But…I hope it comes out the right way and doesn’t make me sound cruel, I mean, Jaden’s injury is unfortunate, but I don’t think it changes the way anyone feels about football.”