SYRACUSE, NY (WRVO) – New York State’s suicide rate has increased by almost 30 percent since 1999, following a nationwide trend, according to a report by the Centers for Disease Control and Prevention released last year. For upstate counties, particularly in rural areas, the suicide rate can sometimes be double or even triple the rate of New York City counties. The upstate farming industry has been struggling in recent years, but there is help for farmers who need it.

Look up the suicide rate for states and counties.

Mike McMahon is a co-owner of the E-Z Acres dairy farm in Homer, which has about 1,000 cows. He said the dairy industry has been producing milk at a loss for several years now and it’s taking a toll.

“It was very disconcerting when letters came out from lenders, as well as milk co-ops, advising farmers of suicide hotlines,” McMahon said.

Homer is located in Cortland County, where the suicide rate is almost double that of New York City. McMahon said he received a call from a dairy farmer who was at the end of her rope.

“She’s asking me who she should turn to,” McMahon said. “Her and her husband, they’ve been farming all their lives, and they lost so much money and equity borrowing just to stay alive and they were looking for some answers.”

So, he gave her the number to FarmNet, a program started at Cornell University in 1986 during another farming crisis, which can help farmers with a wide range of problems. They are made up of about 50 consultants, who handle finance and business plans, as well as issues related to families, like substance abuse, stress, anxiety and depression. 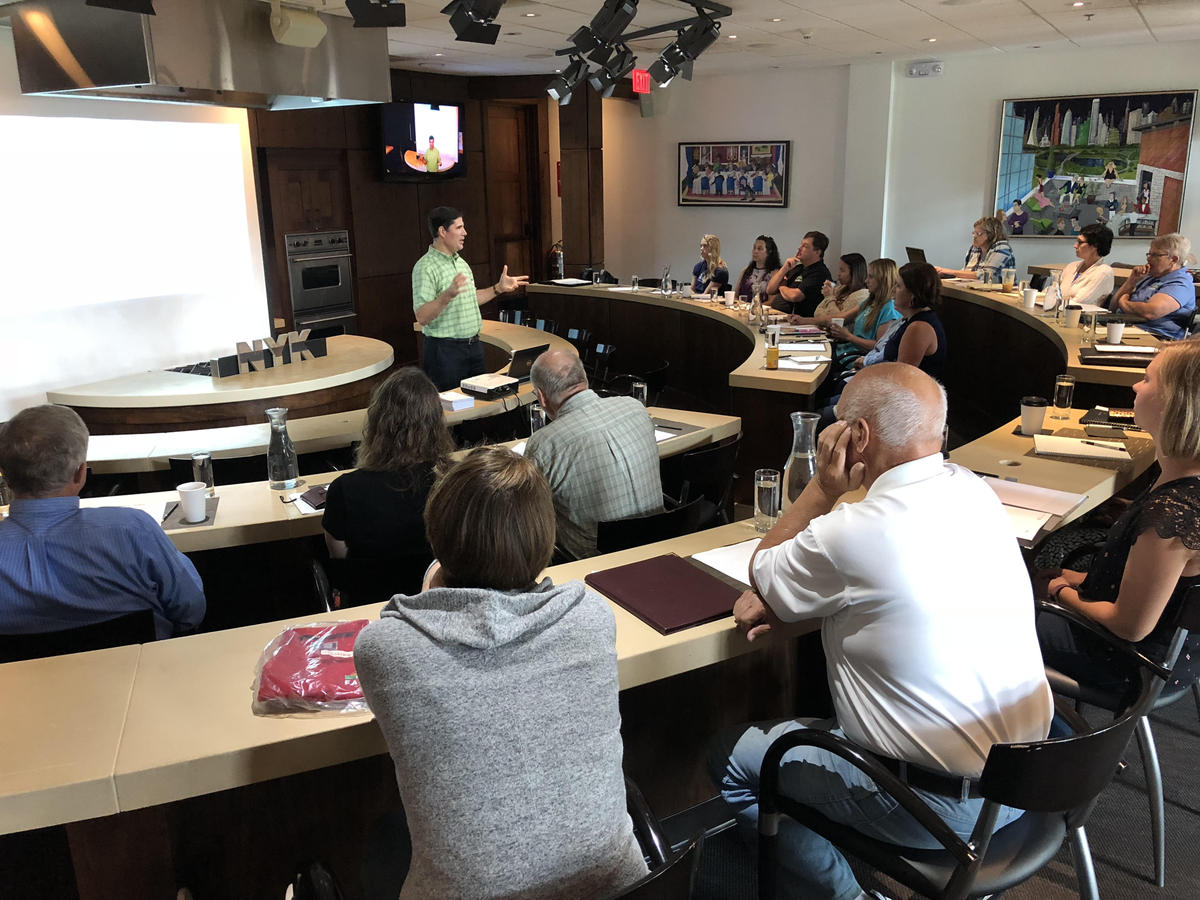 FarmNet consultants being trained in Geneva in 2018. CREDIT FARMNET

Hal McCabe, FarmNet’s outreach director said they are currently working with 500 farm families and their call volume is up 30-40 percent, with some consultants overwhelmed by their caseloads.

“For a lot of these farm families, we are the only mental health care they will receive, because they are simply not going to go to the county seat to try to receive some sort of counseling,” McCabe said. “Unfortunately, we are in the worst time that most of the people that I deal with can recall and we’re talking about lifelong farmers.”

FarmNet sends both a financial and a family consultant directly to a farm on a first visit, which is important, McCabe said, because a lot of things can come out.

“If we only sent the financial, and they’re staring at the balance sheet on the table, they’re missing the fact that the siblings around the table won’t look at each other, they won’t make eye contact, the mom’s got tears in her eyes,” McCabe said.

McCabe said while their first priority is to save a farm and bring it back to profitability, the reality is they help a lot of farms go out of business with as much equity as possible and a plan to transition to an off-farm job. But sometimes, it’s not as bad as it seems to be. McCabe recalls one client that he said was possibly suicidal because of the amount of debt he thought his farm was in.

“So, we went, we looked at all the financials and lo and behold, he was less than $50,000 in debt,” McCabe said. “We were able to adjust some things and put him on a plan to pay off that debt. The stress was so great in what he perceived was happening, that he didn’t want to look.”

McCabe emphasizes to dairy farmers that they’re not alone. Dairy issues are having a ripple effect across the entire industry in New York, impacting agri-service providers like feed dealers, banks, equipment dealers, veterinarians and nutritionists. He said there is so much pride in farming, but also an immense amount of pressure and so much to lose.

“They stand to lose their job, the job of several of their family members probably, their house, their land, their occupation, their identity, their legacy, their family history, all at once,” McCabe said.

FarmNet is not a suicide crisis hotline, and the program is dependent on funding from the state. New York Agriculture Commissioner Richard Ball said its an important group doing great work. He said the stress on family farms is a serious concern right now and farmers are not always good communicators.

“They tend to just work hard and work every day,” Ball said. “Fortunately, most farmers are natural born optimists. Which is why we keep coming back every year to do it again. We always hope next year is a better year. But it is a challenge, and it’s kind of a sobering one.”

Ball said there is nothing better than being a part of a family farm and making it all work, but when world events, like a surplus of milk, stack the deck against farmers, he said it can be frustrating and feel beyond one’s control.

FarmNet is hosting “Mental Health First Aid” events around the state to show the risk factors and warning signs of mental illnesses and how to seek help. There is an event Monday in Albany County, and another one at the end of February in St. Lawrence County.