Libraries have been changing for several years, offering electronic books and other technology. However, they’re also changing to become more accessible, offering young people a safe place to explore and nurture skills needed for today’s economy.

Teens love it because they’re having fun.

“It’s a place for teens,” said Lahnazia Lowry, a 15-year-old student at Rochester’s School Without Walls, referring to the Bausch & Lomb Public Library’s Teen Central. “Instead of us being on the streets, they open their doors and give us something productive to do.”

She said her favorite activity is playing the virtual reality games in the center. Teens also can enjoy every modern video game platform, a fully loaded music studio and several board games that are scattered among the work spaces and rows of books. It’s a place where Lowry can have fun and see her friends, but she said she also appreciates how safe the space is.

It was a purposeful move by library staff to engage youths so productively. A few years ago, they opened Teen Central in the tunnel that connects the building with Rundel. Teens quickly overgrew the space, so staff renovated the children’s book area, adding a larger space for youths to have what Teen Central Manager Dennis Williams calls “intellectual freedom.”

“Intellectual freedom allows a person to come in to a space and feel free to go after any information or knowledge they desire,” Williams said.

It means students interested in music can learn to actually make music, not only for free, but also with guidance from Teen Central staff. 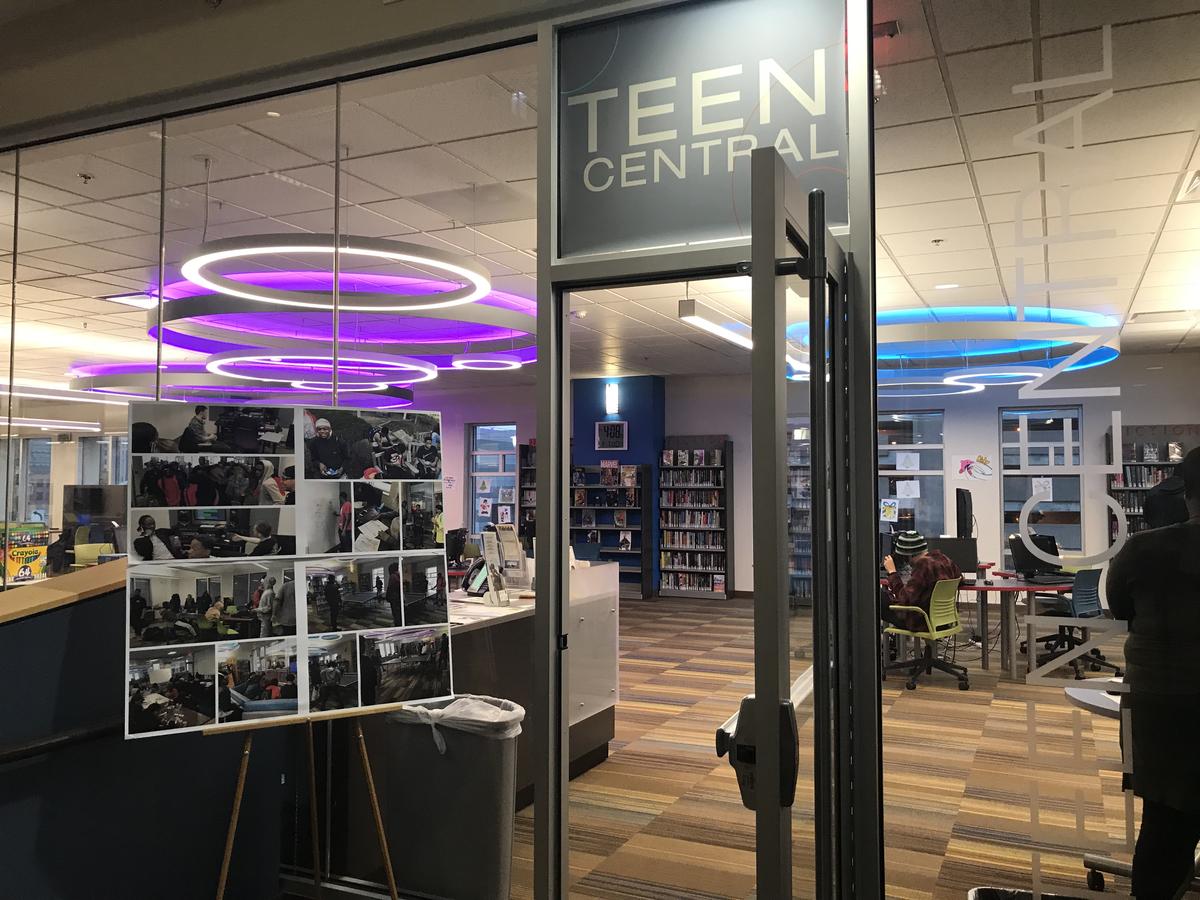 Teen Central at the downtown Rochester Public Library is a safe and innovative space where local young people can learn new skills and develop relationships with other peers and adults. CREDIT TIANNA MANON

The Rochester Public Library isn’t alone. Across Monroe County, librarians are working to engage more young people and make the library a place to learn for everyone.

At the Greece Public Library, director Cassie Guthrie said they’ve even created a Teen Advisory Board, with 18 teenage members, to help youths make real changes around the library and engage with patrons. They help at events, put together programming and even help senior citizens with technological issues.

“For us, it’s just brought such vibrancy into the library,” she said about the board.

Guthrie said when she first joined the Greece library in 2014, there was little “teen programming.” When she asked her colleagues why, they told her youths didn’t really show up. That’s when she realized it was critical to get them involved so they could create programming they want to attend:

“I said, ‘Well, what things were you trying? Were you trying things you know we as 40- and 50-year-old women think what teens would like to do or are you actually asking the teens what they’re interested in from their library?’ ”

The shift made a big difference, and she said she was able to partner with Greece school district students and bring other young people in.

And for some, there are even more benefits.

Kevin Rodriguez, a 17-year-old Edison Tech student, said he appreciates Teen Central’s resources — and how it allows him to see his friends who go to different schools and more easily maintain those relationships.

“You know when you’re a little kid and you’re going to school, the best time is lunch because you get to be with all your friends,” Kevin said. “It’s kind of like lunch every day here because I get to be with all my friends here.”

He said it’s also perfect for friends who may end up at different schools because they can keep seeing each other at the library.

Whether it’s creating intergenerational relationships, exposing young people to technology they wouldn’t otherwise have access to or simply giving them a safe space, local libraries are seriously engaging young people.

And it’s a strategic move.

By including youths early on, Guthrie said they create patrons who will be invested in their libraries for decades to come. They may be more likely to patronize and support libraries or pursue careers in library sciences.

But for right now, youths there are just having a good time learning and connecting with each other.