SYRACUSE, NY (WRVO) – A group of Finger Lakes residents took a bus to Albany Tuesday to continue their fight against a proposed 48-acre trash incinerator facility that would burn solid municipal waste brought in by truck and or rail. 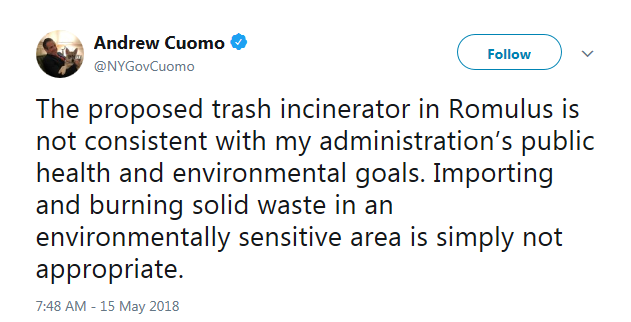 Gov. Andrew Cuomo announced his opposition to a proposed trash incinerator in the Finger Lakes on Twitter May 15.

Will Ouweleen, a vineyard owner and co-founder of the Finger Lakes Wine and Business Coalition, said they are among a growing list of people worried that project could unleash odors and emissions that would damage the environment and the Finger Lakes’ trademark wine industry.

“Burning garbage for scant energy production is not our vision for renewable Finger Lakes and we need all of the legislators in New York state – and thankfully Gov. Cuomo agrees with us as of his announcement today – to recognize that burning garbage is inconsistent with the Finger Lakes way of life and is not part of our renewable energy vision,” Ouweleen said.

Lawmakers in both the state Senate and Assembly are sponsoring legislation that would take the permitting process away from a state board, known as Article 10, and instead allow Romulus officials to decide the trash incinerator’s fate. But an attorney for the Rochester-based company Circular enerG behind the project, Alan Knauf, says the siting process should be allowed to play out rather than “pandering” to locals who do not understand, or misunderstand, the issues.

“The point of the Article 10 process is to avoid this kind of fight and let the board determine whether a project is good on the merits,” Knauf said. “We should go through the process and if it’s a bad project, then it won’t get approved.”

Circular enerG maintains that the trash incinerator would produce fewer harmful emissions than other forms of energy like burning coal, and could help reduce the need to landfill as much waste.

In response to Cuomo’s Tweet, Knauf says Circular enerG may be open to moving the site of the trash incinerator to another location in the state.

“If the governor has got a better location in his mind – we are all ears,” Knauf said. “We are willing to invest $365 million or so, create 85 jobs, create clean electricity.”