After Pennsylvania experienced the wettest year on record in 2018, Wolf said the state would be setting its first-ever carbon reduction targets — 26 percent by 2025, and 80 percent by 2050, compared to 2005 levels.

He said floods in 2018 were evidence that climate change had already come to Pennsylvania. Scientists say global warming will make the state’s weather wetter, since warm air holds more moisture.

“It’s affected our farmers, and the crops that they grow,” he said. “It’s devastated our homes. It’s affecting us each and every day.”

Wolf followed that up with plans to join regional initiatives to reduce carbon from the transportation and electricity sectors.

The steps pleased many in the environmental community, including Joe Minott of the Clean Air Council.

“He understands climate change, believes that it is already having an impact on Pennsylvania and is proposing to address it,” Minott said.

While Minott says Wolf deserves praise, there is a “but.” The governor also supports fossil-fuel and petrochemical industries that contribute to the emissions he wants to eliminate.

Wolf has extolled the jobs that Shell’s Beaver County Ethane Cracker will create for Western Pennsylvania. The cracker, a massive plant that will turn natural gas into plastic pellets, would be “part of (an) energy efficient future,” Wolf recently told a radio interviewer.

“I think if we get this right, these are going to be jobs that stay here,” he told a group of local officials in Beaver County in 2016.

The plant, which received a $1.65 billion tax credit from Pennsylvania, is under construction, employing around 6,000 people. When it’s built in the next few years, it’s expected to employ 600.

Along with jobs, Minott says the ethane cracker will be bringing something else to the region — a large carbon footprint.

For starters, the plant will further entrench the fossil fuel industry in the state’s economy.

Though it’s helped the state lower its electricity sector emissions by 33 percent since 2005 by displacing coal, natural gas has its own carbon footprint. It produces carbon dioxide when burned, and gas wells and pipelines leak the potent greenhouse gas methane into the atmosphere.

On top of that, Minott says, are the cracker’s own emissions.

The Beaver County plant is permitted to emit 2.2 million tons of carbon dioxide a year — the equivalent CO2 of 400,000 more cars on the road, according to the EPA’s carbon footprint calculator.

“The petrochemical plant is itself a humongous emitter of greenhouse gases,” Minott said.

Much of that CO2 will come from burning natural gas to process ethane, a natural gas byproduct, into plastic.

Put another way — that would be the equivalent of nearly 4 percent of the state’s carbon dioxide “budget” of 58 million tons of CO2 in the state’s 2050 climate target.

“It’s hard to understand how (Wolf) thinks he’s going to be able to achieve the reductions that are needed to meet his 2050 goal, while at the same time (promoting) the petrochemical and the gas industry in Pennsylvania,” Minott said.

And the Beaver County plant could be just the first of several in the region. ExxonMobil is considering building a petrochemical plant in Western Pennsylvania, according to one report.

Leah Stokes, a scientist at the University of California Santa Barbara who studies climate and politics, says promoting any new fossil fuels at this point — even natural gas — could tip the world over the edge of climate catastrophe by midcentury. Stokes said that even 80 percent carbon reductions would be insufficient to the scale of the climate crisis.

“What the modeling shows is that if we want to keep warming to 1.5 degrees Celsius, which many consider a sort of safe warming level…we cannot build any new fossil fuel infrastructure.”

Costa Samaras, an engineer who studies climate change adaptation and resilience at Carnegie Mellon, said meeting the state’s climate targets will be made harder by large additions of CO2, like petrochemical plants.

“The math is unforgiving,” Samaras said. “Infrastructure lasts for a long time and a…plant can run for 30, 40, 50, even longer — 60 years. If we think about a budget that Pennsylvania can use, each new fossil (fuel) infrastructure asset is going to use up some of that budget.”

But Wolf has maintained that natural gas, while not perfect, can be done better. He’s proposed a severance tax on gas, and rules to limit methane leaks at wells and tightening other drilling regulations.

The governor’s spokesman J.J. Abbott says Wolf is hemmed in by a Republican legislature that wants fewer rules on oil and gas, not more.

“The governor has been a backstop against some of the proposals (by the legislature) that would reduce our ability to hold the industry accountable to high environmental standards,” said Abbott, mentioning the Governor’s opposition to SB 790, which would reduce some regulations on the conventional drilling industry, and Energize PA, the GOP’s plan to incentive petrochemical development in the state. 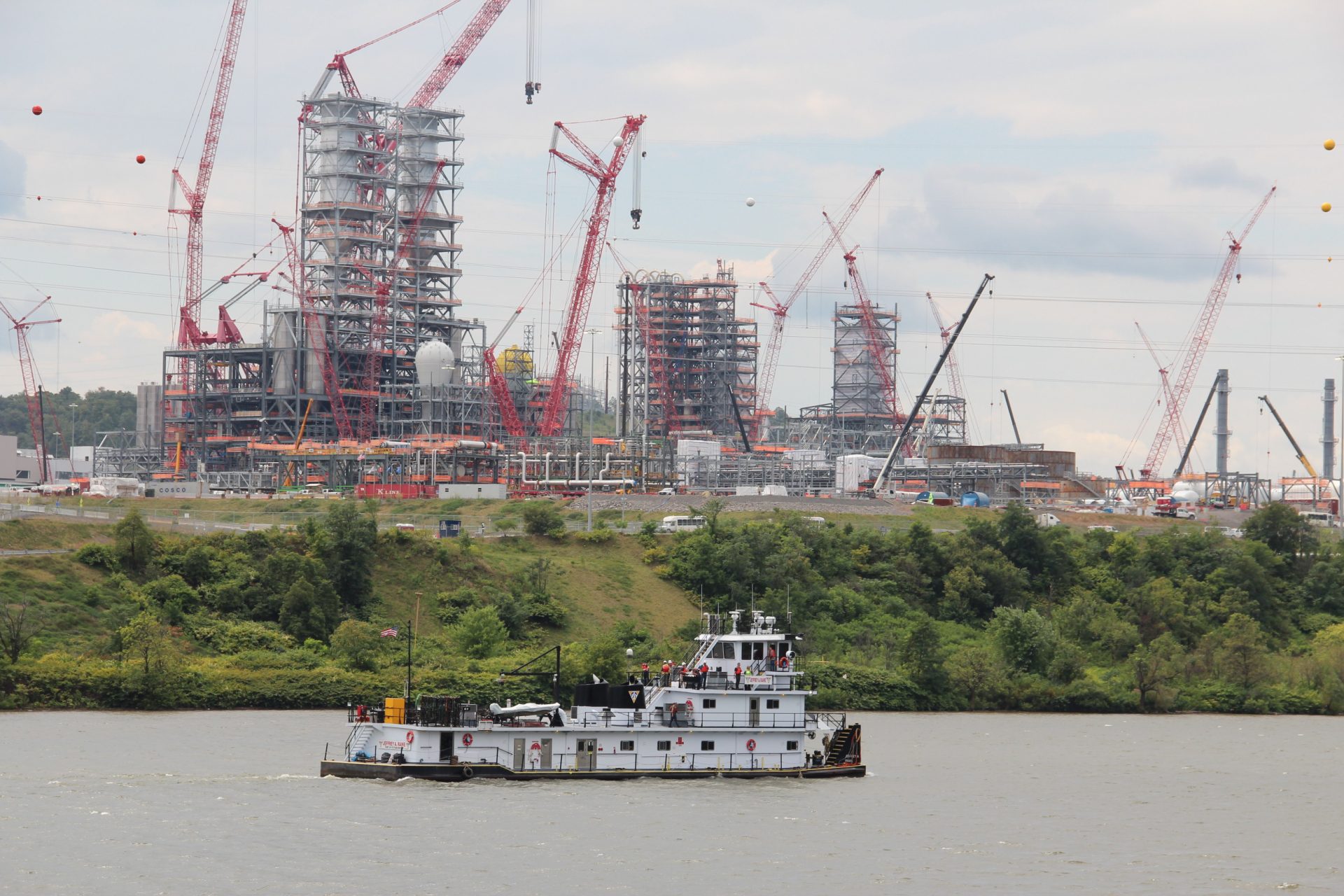 Wolf’s stance on the industry has placated the state’s big trade unions, a major source of support in his own Democratic party.

Jeff Nobers, executive director of the Builders’ Guild of Western Pennsylvania, said Wolf’s pragmatic approach is better for unions in Pennsylvania than that taken by Democratic presidential candidates Bernie Sanders and Elizabeth Warren. The two U.S. senators each has called for a ban on fracking.

“I think the governor’s trying to take a very middle of the road approach to this — ensuring certain (environmental protections) on one side while still being able to take advantage, and grow an industry, and create jobs.”

It’s also earned him praise from the natural gas industry, which has successfully resisted Wolf’s main request of it — a severance tax on gas production. The industry says it already contributes to the state coffers through an “impact fee”— which in 2018 brought in $251 million.

“I think as a Democratic governor in a state like Pennsylvania that Tom Wolf has in many ways found a sweet spot,” said Chris Borick, a political science professor at Muhlenberg College. Borick points to Wolf’s two “blowout wins” in the state as evidence: he won 55 percent of the vote in 2014, and 58 percent four years later.

“He has found a spot that I think aligns very well with Pennsylvania public opinion,” Borick said. “He’s never called for a moratorium on natural gas, but he’s been strong in his proposals and demands for an extraction (or severance) tax.”

Borick thinks in a purple state like Pennsylvania, Wolf’s balancing act might provide a blueprint for other Democrats to win elections.

He says that while public opinion on climate change is changing — 68 percent of Pennsylvanians believe climate change is a problem that should be addressed, according to a recent poll — it still isn’t seen as critical as other issues, like the economy.

“People are concerned about it. They think about it. They’re seeing it more in their lives,” Borick said. “But are they at the point where they’re willing to go much more in? I don’t know if we’ve reached that point. I think we’re headed to that point, but I don’t think we’re there yet.”