Courtesy of the Supreme Court of Pennsylvania

KEYSTONE CROSSROADS – In a decision which could have national ramifications, the Pennsylvania Supreme Court has enacted a new congressional district map that onlookers say is much more favorable to Democrats, replacing one the court overturned and deemed an unconstitutional partisan gerrymander last month.

Justices described the new map in their 48-page decision as “superior” to other proposals filed for their consideration. It’s more compact, they wrote, and splits only 13 counties — fewer than half the number divided in the 2011 map drawn in a process controlled by Republicans.

The court’s version also splits fewer counties than the proposals it received in the past 10 days from Gov. Tom Wolf, GOP leaders, and House and Senate Democrats.

Minutes after the map was released, political analysts began declaring it a victory for Democrats. Since the 2011 map was adopted, Republicans have held a 13-5 advantage in Pennsylvania’s congressional delegation.

The court-drawn map is expected to upend that tilt.

David Wasserman, a national political analyst with The Cook Political Report, thinks the new map will give Democrats a shot at winning at least half of Pennsylvania’s 18 districts. If that were to happen, it would be a huge boost to Democrats looking to win control of the House of Representatives.

“The Pennsylvania Supreme Court didn’t just reverse the Republicans’ gerrymander, they went further by helping Democrats compensate for their natural geographic disadvantages in the state,” he said. “Democrats are clustered in terms of their voters in Philadelphia and Pittsburgh, but the choices that the Supreme Court made in adopting this map tend to help Democrats versus what they might expect from a random or neutrally drawn map.” 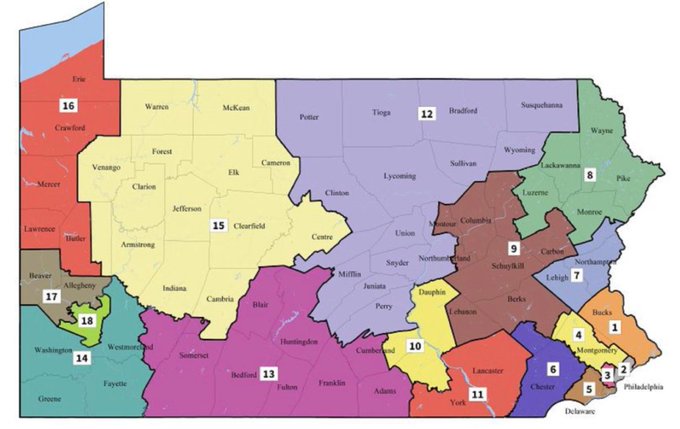 The plaintiffs in the lawsuit and their advocates celebrated the ruling — downplaying any talk of politics.

“We are certainly confident that the court drew this map with a non-partisan process, and it’s going to be a much better map than the partisan gerrymandered map that was in place,” said plaintiffs’ attorney Mimi McKenzie, the legal director at the Public Interest Law Center.

Carol Kuniholm, a board member with the League of Women Voters of Pennsylvania and chair of Fair Districts PA called the map “a win for the people of Pennsylvania.”

“The ultimate win for the people of Pennsylvania would be a transparent process that invites citizen input,” she added.

In their original ruling, the justices gave the GOP-controlled legislature and Wolf, a Democrat, a tight timeframe to reach consensus on a new map through legislation. When that did not occur, the court proceeded to draw its own map with the help of an outside expert, Stanford University Professor Nathan Persily.

Top Statehouse Republicans have pledged to challenge the judicially-enacted map, which they say amounts to an illegal overreach by the Democratic-majority court.

Republicans note that the map’s relatively even number of competitive districts means the court likely approved it with partisan fairness in mind.

Miskin said the fact that Democrats may be able to compete in eight to 11 of the new districts shows bias on the court’s part.

“They have gone out of their way to create chaos and actively assist one party over the other,” he said.

Top Senate GOP lawyer Drew Crompton was more cautious. He said staff are still analyzing the map, and in the coming days will have a better idea of whether they can legitimately call it a Democratic gerrymander.

But he said they are already preparing to file suit against the justices in federal court to keep the court-drawn map from ever taking effect. They’re not yet sure if they’ll seek an injunction, a stay of the state court decision, a temporary restraining order, or something else.

“We believe this is a federal court action,” Crompton said. “It involves US congressmen—we think that’s a federal issue. And…we believe it also incorporates the seminal question—whether or not the courts have the authority to draw a map under the US Constitution.”

He said the filing will definitely come this week, likely within the next few days.

Republicans have already made a couple of unsuccessful attempts to prevent the court from drawing the map, including a stay request to the U.S. Supreme Courtand a claim that two justices’ alleged biases should render case rulings moot.

They’ve also complained that because the Jan. 22 three-page order lacked detail on what justices would consider constitutional, it made an already unrealistic timeline completely untenable.

The court’s full opinion didn’t drop until two days before the deadline for the legislature to pass a map. Ultimately, GOP leaders signed a proposal and turned it over to Wolf without getting a vote from rank-and-file members in either chamber.

Monday’s ruling was split, 4-3. Justice Max Baer maintained his stance that the process has been too rushed and didn’t afford the Legislature a reasonable opportunity to reach common ground.

Chief Justice Thomas Saylor and Justice Sallie Mundy, both Republicans, also noted the court didn’t have enough time to evaluate the proposals, which were still coming in late Thursday night.

The new map dramatically changes how many of the districts are numbered, and significantly alters the geography of many districts.

For example, the Lehigh Valley is now its own district, made up of the entirety of Lehigh and Northampton Counties — a move favoring Democrats. Those counties were split previously, with much of the Lehigh Valley fused to parts of Berks, Lebanon and Dauphin Counties it what had been a safer Republican bet.

The City of Philadelphia still holds three congressional seats, but now has two completely within city boundaries. Previously, parts of the city were included in three different districts that each also covered often Democratic-leaning parts of the suburbs.

That will leave the half dozen candidates who were vying for the seat in the Democratic primary with a less certain path forward.

Keystone Crossroads attempted to contact many of the candidates, but none returned requests for comment in the immediate fallout of the court’s decision. Through Twitter, however, candidate Lindy Li may have summed up a mutual feeling. 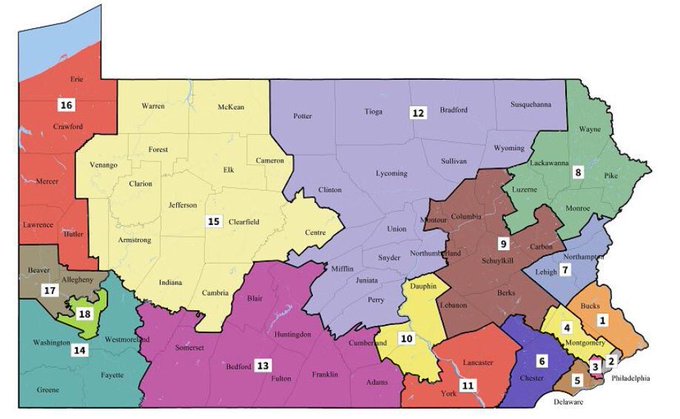 Across the state, a third of Pennsylvania’s congressional seats are up for grabs in this year’s midterm elections. And the map saga has played out at a time when candidates normally would be ramping up campaigns, securing key endorsements and circulating their nominating petitions. But due to the confusion, state election officials have delayed the start of petition circulation until Feb. 27, and bumped other key filing deadlines.

Candidates, meanwhile, have been in limbo, waiting to find out whether they’ll end up in a district different district than where they’d already invested months of campaign work. 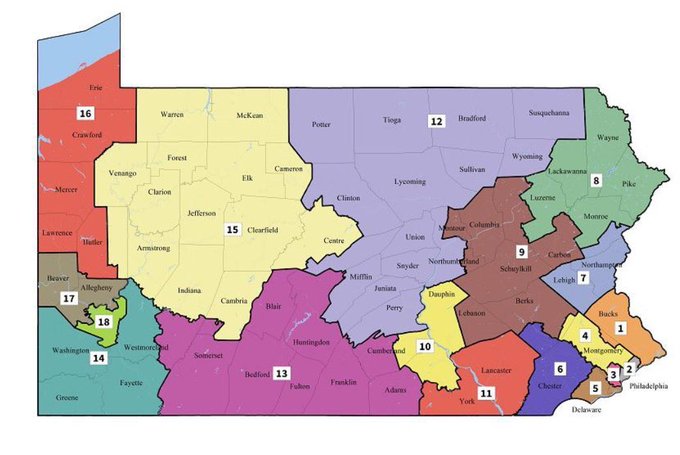 The new map has major ramifications for the Philadelphia suburbs.  Montgomery County had been split among four districts — none featuring a representative who lived in the county. Delaware and Chester Counties both were split among three districts. The new map makes each much more whole, while also keeping Bucks County largely intact.

“The epicenter in some ways of the change is Montgomery County,” said Muhlenberg College professor Chris Borick. “Montgomery County is largely unified and establishing a district in that county for the first time…it is pretty earth shattering.”

Most of Montgomery County will now be represented by the new 4th District, combining areas that were represented by Democrats Brendan Boyle and Dwight Evans, and Republicans Ryan Costello, Patrick Meehan and Brian Fitzpatrick.

Meehan, who retired after facing sexual harassment allegations, represents the infamously oddly-shaped 7th District, often described as Goofy kicking Donald Duck. Under the new map, the numerous candidates for that race now must decide where, or even if, they will run.

Costello, who lives in West Chester was dealt a particularly tough hand. His 6th district now connects Chester County with the city of Reading — which used to be attached by a narrow band to a less competitive district comprised mainly of Lancaster County.

“There are a couple of conscious choices the Pennsylvania Supreme Court made in adopting this map: linking all of Chester County with Reading and Berks County, which is an overwhelmingly Democratic city. That would give Democrats a much better opportunity to defeat Ryan Costello,” said Wasserman, the analyst.

Lancaster County and southern York County have been joined as the 11th District, thought to be now made safer for incumbent Lloyd Smucker. Before, all of York and parts of Cumberland and Adams counties made up the 4th.

In Western Pa., Erie had been split between the 3rd and 5th Districts — but now, the entire county has been joined with Butler, Lawrence and Mercer Counties.

Allegheny County is now basically split in half, with Pittsburgh and southern Allegheny together as the 18th; and the north combined with Beaver and northern Washington Counties to form the 17th, a seat currently held by Republican Keith Rothfus.

“I think it immediately makes it more competitive for Democrats as you bring in some of the suburban Pittsburgh voters and voters from Northwestern Allegheny County,” said Borick.

The special election to fill the vacant seat in the current 18 Congressional District will not be affected by the new map. Pennsylvania state Rep. Rick Saccone, a Republican, and attorney Conor Lamb, a Democrat, are running to complete the rest of former Republican Congressman Tim Murphy’s term in office. Based on residency, it’s expected that who ever wins the special election will face an incumbent in the primary using the new map. Lamb would face Rothfus; and Saccone would face Democratic Congressman Mike Doyle.

The court’s ruling gives the Secretary of the Commonwealth until Tuesday to raise any logistical issues with the map related to election scheduling.

WESA also contributed to this story.

Compare the 2011 congressional district map with the court-imposed plan using the interactive slider below.