PA POST – Elected leaders in several Pennsylvania counties say some businesses are free to reopen on Friday, May 15 — with or without the governor’s support.

The move comes in response to Gov. Tom Wolf’s business shutdown and stay-at-home orders, which he first issued in March.

In counties under the red phase, only businesses considered life-sustaining can open and people can only leave their homes for essential work, errands or exercise.

In yellow counties, some retail businesses can open, along with child care centers, and gatherings of up to 25 people are allowed. But gyms, spas, hair salons, theaters and casinos must remain closed, and restaurants are still limited to carryout or delivery.

A worker tends to plants in the greenhouse at JB Hostetter & Sons Inc. in Mount Joy on May 9, 2020. Kate Landis / PA Post

In counties that reach the green phase, most restrictions are lifted but people and businesses must follow coronavirus mitigation guidelines from the Pennsylvania Department of Health and Centers for Disease Control and Prevention.

Statewide, 24 counties in north-central and northwestern Pennsylvania moved from red to yellow on May 8, and 13 southwestern counties are scheduled to do so on Friday.

But some county leaders are pushing to open sooner.

Here’s a look at the issue in eight counties and the latest developments.

Know of action in a county not on this list? Or of the latest development we missed? Let us know at emahon@papost.org or at 717-421-2518. We’ll keep this page updated.

What power do county commissioners have anyway?

County leaders have limited authority over businesses or power to overturn emergency orders issued by the governor. But Beaver County is a good example of how this push to reopen can work. It is the only county in southwestern Pennsylvania that Wolf hasn’t given the OK to move from the red to yellow phase on Friday.

County leaders there are encouraging businesses to act as if they were in the yellow phase.

Commissioner Chairman Daniel Camp III, a Republican, said the county didn’t pass a resolution or order to declare that businesses could reopen. Instead, the commissioners held a news conference on May 8 and have tried to get the word out that the county’s independently elected district attorney says he won’t prosecute businesses that violate the governor’s shutdown orders.

Camp said since surrounding counties are moving to yellow, and since county leaders think Beaver County is also ready for the yellow phase, businesses should operate as if Wolf has moved them to yellow. But he said bars and restaurants should not open for dine-in customers, since they are only allowed to do so in counties that achieve the governor’s green phase.

Prosecution: District Attorney David Lozier, a Republican, on March 20 said he didn’t plan to use “scarce prosecutorial resources to enforce” Wolf’s March 19 shutdown order “absent an immediate and extreme threat to public safety.” In a memo on May 8, he said the office wouldn’t prosecute a business for violating the closure orders because he sees the orders as “arbitrary and capricious.”

County commissioners: They announced on May 8 that they would move the county from the red to yellow phase.

Despite threats from the governor on May 11 that communities that do so without his approval could lose federal CARES Act money, Commissioner Chairman Daniel Camp III says the county will continue with its plans to allow some businesses to reopen on May 15 as if the county were in the yellow phase.

He questioned whether the Wolf administration had the power to follow through on threats that businesses that reopen ahead of the governor’s timetable could see their occupancy certificates revoked or have their insurance coverage put at risk. And he said people in Beaver County deserve the federal CARES Act money.

“If he wants to hold that money back from somebody that should have been given to them, that’s something he’s going to have to live with,” Camp said. “We will find a way to make sure Beaver County succeeds.”

Beaver is the only county in southwestern Pennsylvania that the governor hasn’t given the OK to begin easing restrictions. A nursing home there has had the largest outbreak of its kind in the state, driving up the total coronavirus cases in the county. Camp said he thinks the state failed that nursing home.

County commissioners: Commissioners said on May 9 that they would develop a plan to reopen businesses in the county, but they didn’t list a specific timetable.

In a press conference Wednesday afternoon, Commissioner Chairman Christian Y. Leinbach said he is concerned about what will happen if businesses reopen in violation of the Gov. Wolf’s orders. Leinbach warned that insurance companies could deny coverage to small businesses if they open early. State-issued licenses could also be at stake if businesses open early.

For this reason, the commissioner called on Wolf to reevaluate rules for businesses.

“We are pressing the governor to allow any business to open that can implement effective health and safety standards to mitigate COVID-19,” Leinbach said.

Prosecution: Prosecution for violating the governor’s coronavirus orders “would only occur in extraordinary circumstances,” District Attorney Fran Chardo’s office said in a statement on May 9. Chardo is a Republican.

County commissioners: Republican Jeff Haste, chairman of the Dauphin County Board of Commissioners, on May 8 called Wolf a dictator and said it was time to reopen businesses. And Commissioner Mike Pries, also a Republican, said the county would move to the yellow phase on May 15 on its own.

But after Wolf threatened to withhold federal funding from counties, Dauphin County commissioners backed off the plan on Wednesday, PennLive reported. But Haste still called the county a “business sanctuary” with no plans for local prosecution.

Prosecution: District Attorney Cory J. Snook, a Republican, said in a statement May 12 that his office will only prosecute businesses in “extraordinary circumstances.” He said he won’t prosecute businesses that practice social distancing, use appropriate sanitation and cleaning techniques, and “follow other common sense measures.”

County commissioners: Commissioner Chairperson Alice Gray said a letter was sent to Gov. Wolf asking that Juniata County be opened, but she said, “we will not override the Governor’s mandate.”

In the May 12 letter, the county commissioners, joined by state Rep. John Hershey (R) and Senate Majority Leader Jake Corman (R-Centre), said the county doesn’t want to jeopardize any state funding, licenses or insurance coverage for its residents.

Prosecution: The district attorney’s office on May 10 said it wouldn’t prosecute citations for alleged business and stay-at-home order violations. District Attorney Heather Adams is a Republican.

The two Republicans are split with the Democratic commissioner on the issue.

“The reality on the ground is that, as we’ve been saying, you know, people are voting with their feet and going back to work,” Commissioner Chairman Joshua Parsons said. “Traffic has picked up in the last three weeks, and people are doing what they need to do. Small businesses, workers are being crushed by this.”

Republican Commissioner Ray D’Agostino echoed that view: “Businesses have to make the decisions for themselves as to whether or not they have the ability to open or not,” D’Agostino said.

Commissioners on Wednesday morning approved several measures, including action to expand contact tracing and testing, related to easing restrictions in the county.

District attorney: District Attorney Pier Hess Graf, a Republican, in a May 11 letter said all local businesses could reopen without fear of criminal consequences.

Health department: County doesn’t have its own.

Prosecution: District Attorney Michael O’Pake, a Democrat, said he believes the county is ready to move into the yellow phase. But he said he has a responsibility to “uphold the law,” and he can’t issue a blanket statement about which business owners he would or would not prosecute for violating the shutdown order.

Still, he said he’s received fewer than three phone calls from police chiefs asking about possible violations. His advice to the chiefs was to focus on education first and not to issue citations. “I didn’t get return phone calls, so I’m assuming it all worked out,” O’Pake aid.

Health department: County doesn’t have its own. 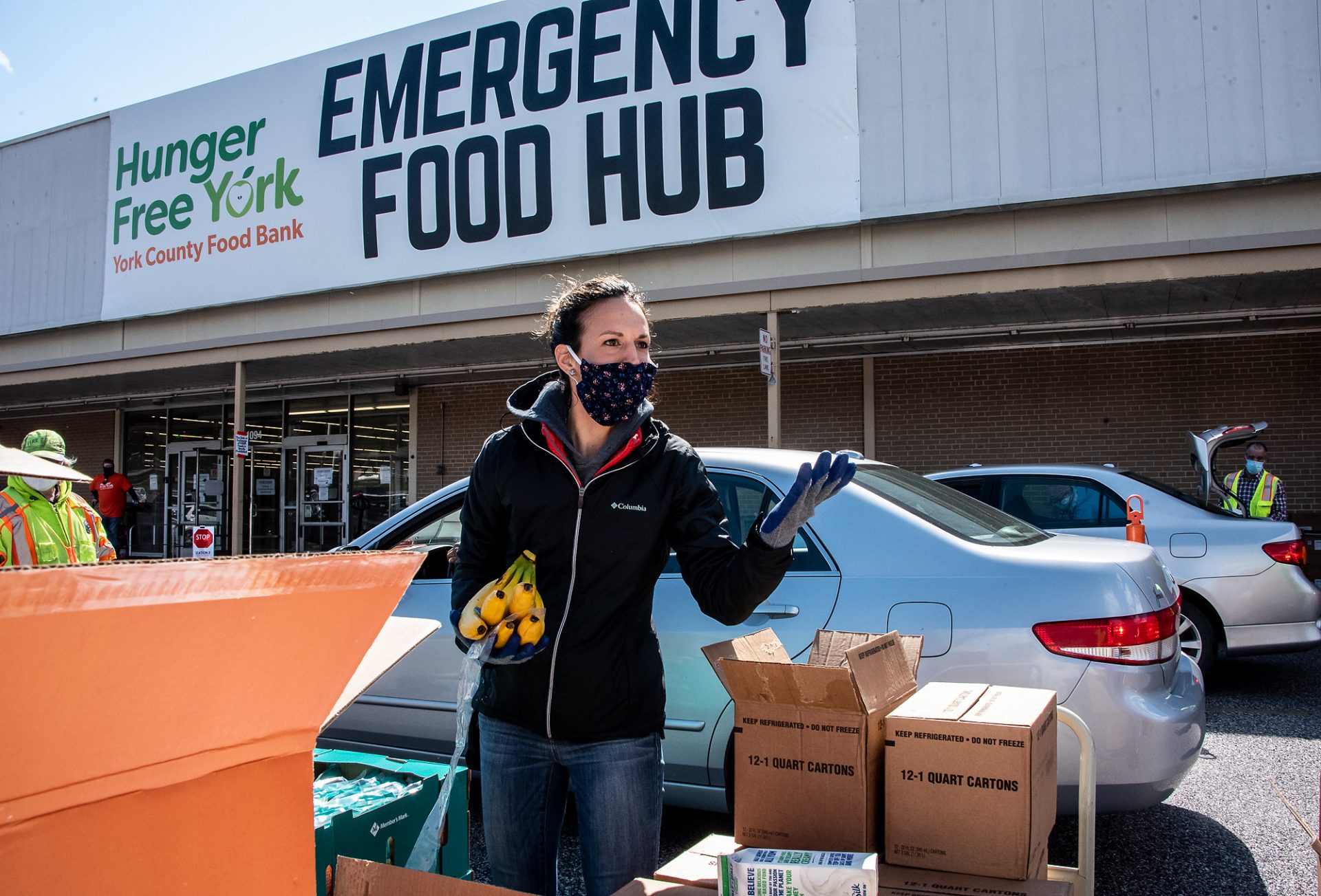 Prosecution: District Attorney Dave Sunday, a Republican, said on May 8 that his office won’t prosecute anyone for allegedly violating the business closure orders, and he’s directing law enforcement not to issue citations. A diner with multiple locations in the county opened for dine-in customers on Sunday.

County commissioners: Commissioners are asking Wolf to allow the county to reopen. But they haven’t said they will reopen on their own.

Michael Helfrich, the Democratic mayor of York city, said in a video message on Monday that the city plans to continue enforcing the governor’s shutdown. But he also wants to see the county move from red to yellow soon.

“All of our metrics, I believe, are in line for reopening,” Helfrich said in a video message Monday. “But that doesn’t mean we take it upon ourselves to go out and break the law.”

He also wants to see a plan for reopening businesses that aren’t allowed to reopen until the green phase, and he wants clear metrics for that.

Health department: The county doesn’t have its own, but York city does.

Ed Mahon can be reached at emahon@papost.org and at 717-421-2518. PA Post reporter Anthony Orozco and PA Post reporting intern Ben Pontz contributed to this story. PA Post is an independent, nonpartisan newsroom that covers politics and policy in Pennsylvania. Read their reporting at PaPost.org.