THE ALLEGHENY FRONT — It’s the time of year when people who love apples celebrate. But there’s a new threat to the U.S.’s $4 billion annual apple industry. Young apple trees have been suddenly dying.

In North Carolina, up to 80% of orchards have been affected. Pennsylvania’s apple industry, valued at $107 million last year and fourth in the nation, is also at risk. Researchers call the problem Rapid Apple Decline or RAD, and they’re trying to figure out what’s causing it.

One grower who’s worried about his apple trees is Noah Petronic. He’s the orchard manager at Soergel Orchards in Wexford, north of Pittsburgh.

As he walks down a row of Braeburns, most of the trees look healthy, with green leaves and bountiful pink fruit.  But a couple trees have taken on a strange rusty hue and are clearly struggling.

“You can just see the first two trees you hit right here have shut down just over the past few weeks,” he said. “And I can point out about another five or six that are shutting down.”

Petronic started noticing the problem around 2013.

“You have a beautiful crop on, especially August-September,” he said, looking toward a withering tree. “And then, all of a sudden, you’d come back a week later, and it would be dead.” 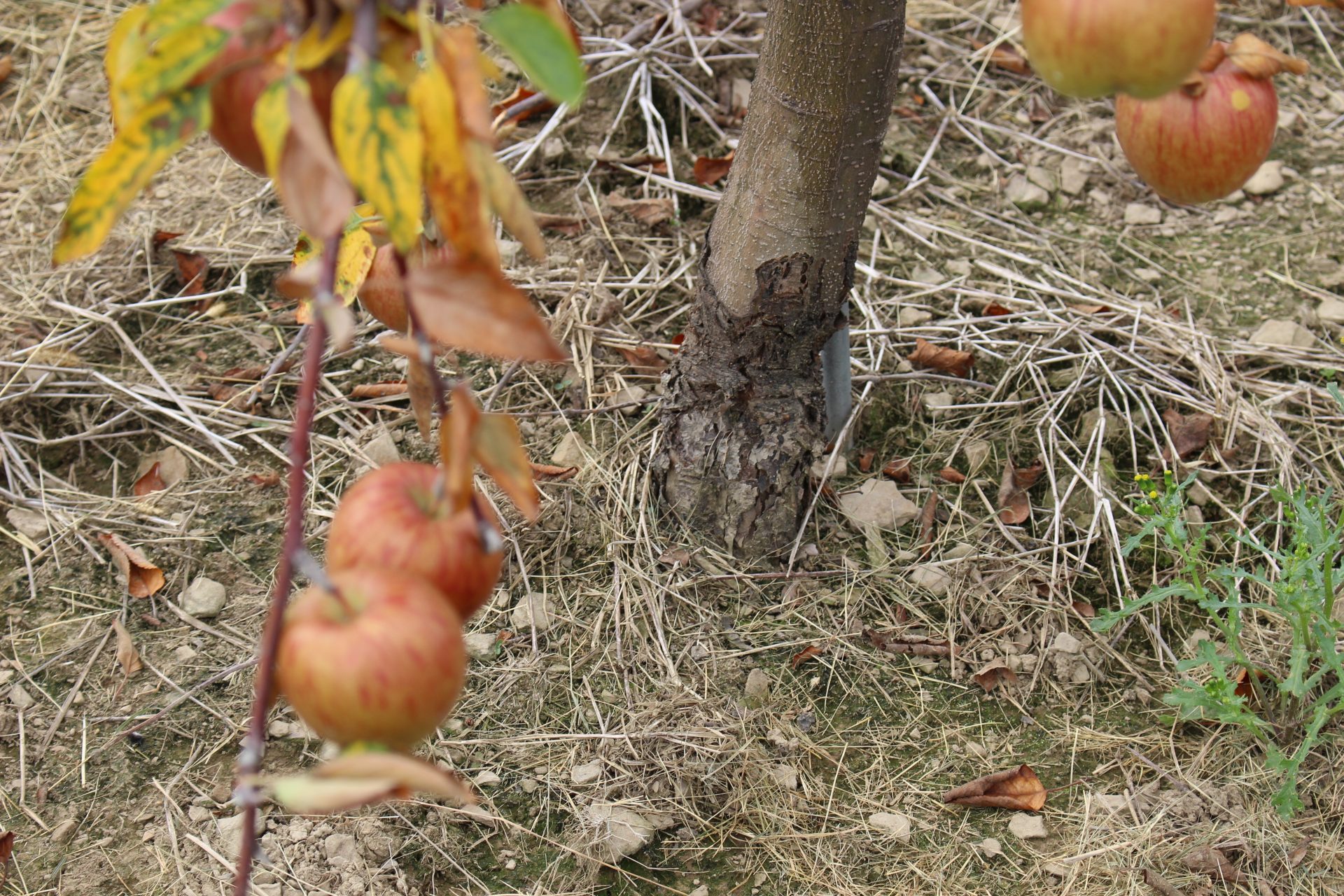 Julie Grant / The Allegheny Front. Rot along the grafting union, which connects the grafted variety to the roots, is a sign of RAD.

Apple trees are actually made up of two parts that are grafted together. Growers choose a type of rootstock, based on the soil or size of the trees they want, and then graft the apple varieties – like Braeburn or Golden Delicious – onto it.

Petronic scrapes his boot along the bark of a dying tree, just above the root.

“You can see where the graft union is down there,” he said, revealing a line around the base of the narrow trunk. “That’s just totally necrotic – it’s rotting away. If we could peel it away, you could actually see the rot.”

“This year, it’s been horrible,” said Kari Peters, an associate research professor at Penn State’s Fruit Research and Extension Center in Adams County.  Seventy percent of the state’s apples are grown in the county. Peters has heard from about 50 Pennsylvania apple growers this year.

“I’ve been so overwhelmed in 2019 by reports of massive tree die-off that it’s been difficult to keep up,” she said.

Peters has been trying to get to the bottom of it. She and other researchers have looked at common apple problems like soil pathogens, viruses and even rodents. Everything they’ve tested has come back negative.

“The common thread with these declining or dead trees is the collapse at the graft union,” she said. “The roots were perfectly healthy, and the graft union was dying.”

Peters doesn’t think this is caused by an insect or a disease that spreads from tree to tree.

A study by Cornell University published this year found that weather-related stress like drought and severe cold could be an underlying cause.

Peters doesn’t believe that’s the whole story. She has other theories, including increased rainfall or certain herbicides. A variety of stressors could be working together to lead to Rapid Apple Decline.

Could High-Density Orchards be at Higher Risk?

Researchers are also looking for a connection between newer growing methods and Rapid Apple Decline.

At Soergel Orchards, one stand of apple trees looks like a nostalgic picture of an orchard. Forty-year-old trees of Stayman, Winesap and other older varieties spread their branches twelve feet out. While in the next field, rows of tightly planted saplings of newer varieties like Crimson Crisp are being trained upward on a trellis.

“We’re getting higher production off of this high-density orchard quicker,” Petronic said. “So we’re able to help break even a little faster than than the old-style orchards.”

Trees grown this way can produce apples in half the time as trees that are more spread out.

But this higher density planting can stress trees. Petronic also fears that the increasing rainfall in recent years is creating constantly wet ground here, which researchers are also looking into as another possible factor.

“It’s heartbreaking,” he said. “Because you’re taking care of these trees for years and years…and all of a sudden, it just doesn’t make it.”

Petronic says farming isn’t getting any easier, but to continue growing local produce for customers, orchards like his will have to learn to adapt to Rapid Apple Decline.