ROCHESTER, NY (WXXI) – Many American soldiers who attempt suicide have no prior mental health diagnosis, according to the most recent study to make use of data collected by the U.S. Army and the National Institute of Mental Health. 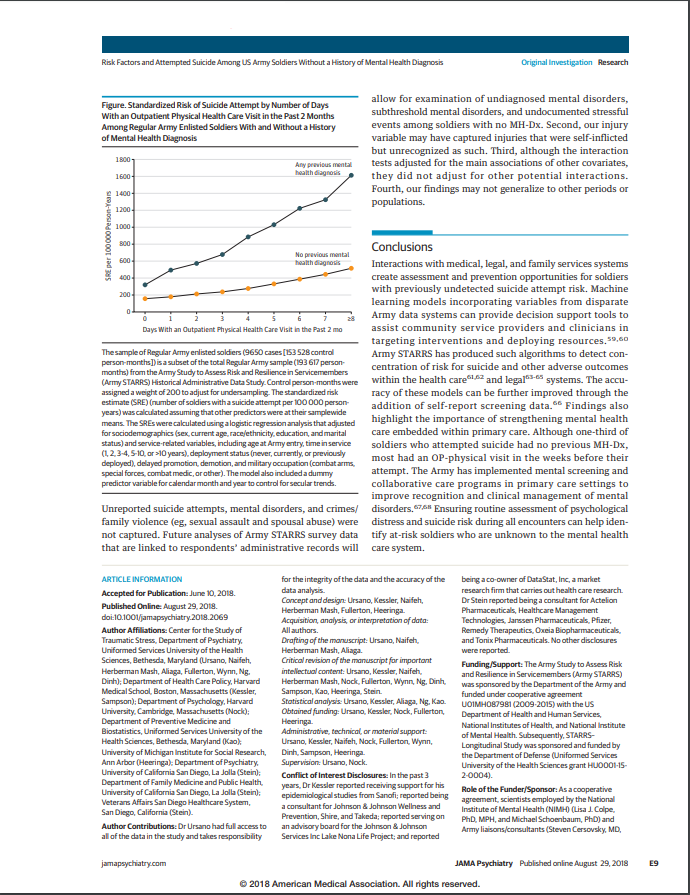 A study in JAMA Psychiatry finds that more than a third of active-duty soldiers who attempt suicide have not received a mental health diagnosis.

The study, published Wednesday in the psychiatry journal of the American Medical Association, looked at anonymized records of more than 9,000 American soldiers who attempted suicide while on active duty. More than a third of them had not been diagnosed with a mental illness.

For their loved ones their suicide attempt might have come as a surprise. But for people who study the issue, these results are predictable.

“It’s not a surprise,” said Stephanie Gamble, deputy director at the Veterans Administration’s center for suicide prevention in Canandaigua.

“It’s not a shock to my colleagues and I, at all,” said Kinga Kondor Hine, wellness manager at the Rochester Veterans Outreach Center.

For veterans who are still enlisted, Kondor Hine said, “there’s definitely a stigma associated with mental health.” Soldiers who are struggling with psychological and emotional well-being often don’t seek treatment, she said. That can lead to the feeling of problems piling up and becoming overwhelming.

“In the military, anything that has to do with weakness is not going to work,” she said, and those repressed feelings can later surface in dangerous ways.

The statistics on suicide among veterans mirror recent findings by the Centers for Disease Control and Prevention about suicide in the general population, Gamble said. The CDC wrote in June that its most recent data showed “suicide rates increased among both sexes, all racial/ethnic groups, and all urbanization levels.”

Gamble said she views the military study results as an invitation for both mental health professionals, and families and communities, to connect with veterans. She said even things that might seem like small steps, outside of a formal mental health care setting, like getting better sleep, can be significant in averting a suicide attempt.

“We need good treatments to combat depression, and anxiety, and PTSD, and substance abuse,” she said. “But that’s not the only answer. We need to do more.”