BUFFALO, NY (WBFO) – The American Cancer Society Cancer Action Network has released its latest progress report on how states are doing when it comes to passing and implementing policies and legislation to prevent cancer. “How Do You Measure Up?” gave New York generally good grades.

In our state, Government Relations Director Julie Hart said she is “seriously concerned with New York’s low level of funding for the tobacco control program. New York received a failing grade of red because funding for this crucial program is woefully low.”

Hart said smoking kills more than 28,000 New Yorkers annually and another 13,000 will be diagnosed with lung cancer this year, even though there has been “a small decrease” in the smoking rate. She said too much tobacco money is diverted away from smoking control in New York.

“Just gets diverted and goes into other areas,” Hart said. “So what we want to see is: You know what? We’ve got to commit to increasing funding so that we can help people quit smoking, help prevent kids from beginning this deadly addiction, keeping them away from electronic cigarettes. The bottom line is it’s going to nake New York healthier. We’ll save on healthcare costs.”

The report notes New York improved its grades this year as lawmakers passed legislation to prohibit the use of indoor tanning devices by those under age 18.

“We did make some progress this year. We saw a bill pass both houses that would increase the age to use tanning devices to 18,” Hart said. “We have had a really good conversation with the governor’s office. There should be no problems with the  bill. I think it’s just a matter of time until it gets delivered and signed. So we’ve seen a little progress there.”

Hart said New York State does have a “really good” cancer services program that provides free cancer screenings for a few different types of cancer, including breast cancer. She said it provides people who otherwise would not have health insurance coverage the opportunty to get that mammogram or other screening.

“As advocates, we have the opportunity to work with our state legislators on implementing policies and programs that prevent and treat cancer,” said Hart. “Together, we can build stronger, healthier communities and ensure New Yorkers have access to measures that prevent disease before it occurs, ultimately saving more lives from cancer.”

You can read the entire report here.

How New York State Measures Up 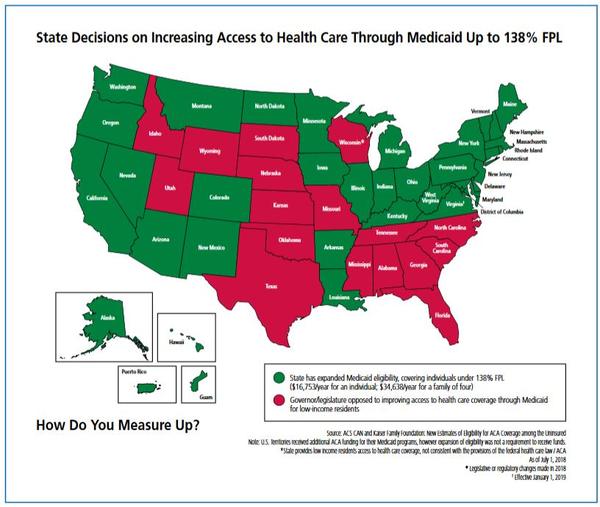