But Gov. Andrew Cuomo said the plan is too ambitious and unrealistic. 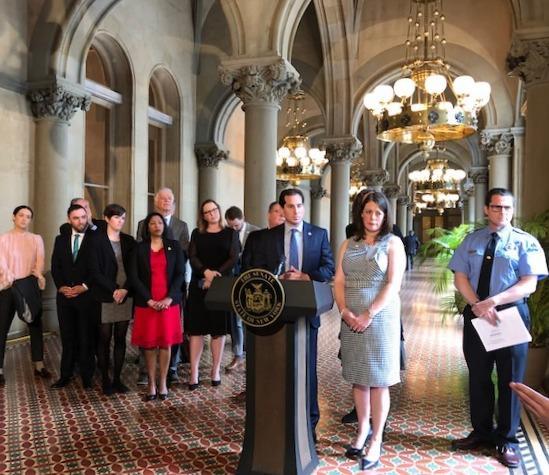 Sen. Todd Kaminsky, chair of the Senate’s Environmental Conservation committee, said he thinks that the state can enact the major anti-climate change measure between now and June 19, when the session is scheduled to end. He said there isn’t time to wait.

Kaminsky said that new reports have found there is more carbon dioxide in the atmosphere than in “any time in the history of Homo sapiens walking on the Earth.”

“That is an incredibly scary statistic,” Kaminsky said.

He said his own Long Island community had to deal with aftereffects of Superstorm Sandy in 2012. And he said everyone has seen the news footage of California burning and severe floods in the Midwest.

Kaminsky was joined at the news conference by several other Democratic lawmakers, environmental groups and actor Megan Boone of the TV show “Blacklist.” She made a heartfelt appeal for action, saying she worries about the future for her young daughter.

“It’s beginning to feel, with the frightening indifference of our federal and now our state government to address this issue, that she won’t have much of a life to claim,” Boone said.

The measure, known as the Climate and Community Protection Act, would require the state to be entirely free of all fossil fuels by 2050. New York would need to get half of its electricity from renewable sources by 2030, higher than the current goal of about 30 percent by that year.

The measure also distributes 40 percent of all funding for clean energy to projects to communities that have been disadvantaged by fossil fuel pollution and are more adversely affected by extreme weather.

Cuomo also has a priority list for the end of the session, but it does not include climate change measures.

Cuomo, speaking on WNYC’s “The Brian Lehrer Show” the day before the news conference, said he doesn’t think the goals in the legislation are realistic. He said all of the state’s power plants would have to close, and that’s not feasible in a short time frame.

Cuomo released his own version of a Green New Deal in his budget plan in January, but it was not adopted in the final spending plan, approved April 1. Cuomo’s plan also has goals to reduce greenhouse gases. It would require that the state’s electricity come from what’s known as “clean power” by 2040. The plan also continues the state’s ban on fracking for natural gas and would end coal-burning by next year.

Julie Tighe, head of the New York League of Conservation Voters, said the governor is “not doing enough” to use his political capital to get something passed.

“We believe it’s still achievable, no matter what the governor may have said yesterday,” Tighe said.

Tighe formerly worked under Cuomo as chief of staff at the Department of Environmental Conservation.

The state Assembly already has approved the climate change measure. Kaminsky was asked by reporters whether the Senate might pass the bill and then force the governor’s hand by presenting him with the legislation to sign or veto. He hesitated in his answer.

“That’s above my pay grade,” Kaminsky said. “I just know that we need to get the best product we can out of the Senate, and work with anyone who wants to work with us to make this a reality.”

Kaminsky and the other supporters of the measure say there’s still time for a three-way agreement and a chance to make significant steps against climate change before the session is over.