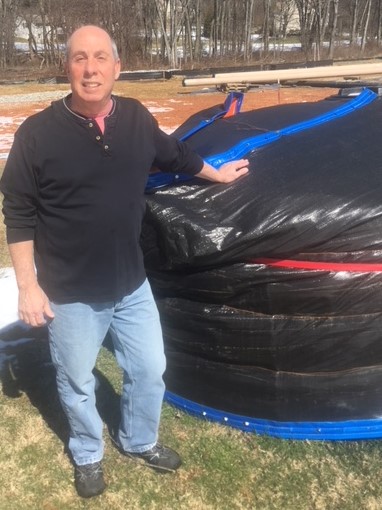 JON HURDLE Bob Hoffman of Edgmont Township, Delaware County, says he’s OK with a water ‘buffalo’ that Sunoco installed outside his home. It’s to ensure a supply of clean water in case his private well is disrupted by drilling for the Mariner East pipelines.

A field outside Bob and Deborah Hoffman’s Delaware County home is filled with orange construction fencing, a 20-foot industrial curtain blocking their view of some surrounding houses, and hundreds of yards of steel pipeline waiting to be laid as part of the controversial Mariner East project.

On the lawn about 50 yards from their front door is a squat black tub known as a water buffalo, from which the Hoffmans get their water while the pipeline company, Sunoco, prepares to drill an underground bore where the pipe will be installed.

The temporary water supply is being provided to the Hoffmans and other owners of private water wells along the pipeline route because of concerns that their water could turn cloudy or become contaminated as the company drills a path through the local aquifer.