SYRACUSE, NY (WRVO) – One of the battlefields on Election Day will be races for the New York state Senate. Democrats are hoping to corral a majority so they can control all three branches of government in New York State. One of the most closely watched races will be in central New York.

After longtime Sen. John DeFransisco’s decision to retire this year, the 50th Senate District went up for grabs for the first time in more than 25 years. That put this race on the map, even though it has been gerrymandered to carry a slight republican edge in enrollment. 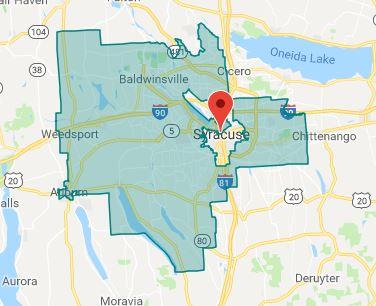 Democrats need just one seat statewide to take control of the Senate, which has been in mostly GOP hands for decades. The Republican in the race for the 50th, is a seasoned politician, Onondaga County Comptroller Bob Antonacci. He admits this contest comes down to more than just keeping one seat in the Republican column.

“I think we’re down to maybe a key three or four Senate races and this is one of them,” said Antonacci. “And if we are not successful, the majority is going to switch over to the Democrats.”

High school biology teacher John Mannion, a political novice, is the Democratic Party standard bearer. He agrees that this race is key in the fight for the future of the Senate, and issues Democrats hold dear in New York.

“Common sense legislation has made it through the Assembly and never hit the Senate floor, even with an overwhelming number of sponsors,” said Mannion.

The amount of money flowing into the race underscores its importance. The Democratic Senate Campaign Committee along with Union PACs have invested heavily in Mannion’s campaign. Antonacci has received help from the Senate Republican Campaign Committee and other political actions committees. The result has been a flurry of commercials and mailers bombarding voters across the district.

For his part, Antonacci is emphasizing his experience in county government, but that’s not all.

“I think if it comes down to one thing as you’re sitting their ready to circle the oval, do you want checks and balances in state government? And if you do, you vote for me,” Anotonacci said.

Mannion believes his political inexperience is what makes him the more attractive candidate.

“I think what we are seeing is too great of a disconnect between ourselves and our representatives, and an increasing polarization of the parties,” said Mannion. “So I think it’s a good time for someone who has not been corrupted by the system to run.”

The 50th includes parts of Cayuga and Onondaga counties, including parts of the cities of Syracuse and Auburn.