This story was produced as part of a joint effort among Spotlight PA, LNP Media Group, PennLive, PA Post, and WITF to cover how Pennsylvania state government is responding to the coronavirus.

TRANSFORMING HEALTH — As the first Pennsylvanians tested positive for the coronavirus in early March, state health officials told hospitals to update their emergency plans so they could meet a potential surge of people who would need intensive care.

Hospitals were told to submit those plans to the state Department of Health and implement them by March 20. But more than three weeks later, with over 24,000 confirmed cases of COVID-19 in Pennsylvania, there’s no easy way to know what hospitals have done to prepare.

The Health Department declined requests to share hospitals’ emergency plans and has provided scant information about them. The plans should show how hospitals would increase beds to meet surge capacity, address staffing concerns, and handle things like testing, officials said.

The lack of transparency comes as the state’s health systems are seeking taxpayer dollars to subsidize their efforts, asking Gov. Tom Wolf on Monday to forgive $500 million in tax payments and create a $1.5 billion emergency response fund.

Health systems that are relying on taxpayer dollars should be required to make their preparations clear to the public, said Cynthia Fisher, founder of Patient Rights Advocate, a nonprofit that pushes for hospital transparency.

“Not only do they not have transparency and accountability on emergency plans and pricing and costs of tests and treatment … they’re getting all this stimulus money,” Fisher said.

The Hospital and Healthsystem Association, a member organization that lobbies for health care providers and works with the Department of Health on emergency planning, said in a statement that hospitals “are among the most heavily regulated organizations in the commonwealth, subject to clinical, operational, and financial oversight from multiple state and federal agencies.”

You can rely on WITF during emergency situations, but also when news seems a little less urgent. We’re here to keep you informed. Learn more about our editorial process and connect with our journalists.

“In fact, all hospital activities are subject to routine, frequent, and unannounced surveys and inspections by regulators,” the statement said.

As the anticipated peak of COVID-19 cases in Pennsylvania approaches, some health-care workers say more intensive care beds are needed to ensure that hospitals can meet demand.

Department of Health spokesperson Nate Wardle said the state has asked hospitals to increase their ICU capacity, but isn’t independently confirming whether they are doing so. Wardle declined to say how many hospitals submitted emergency plans, citing a state patient confidentiality law.

But Melissa Melewsky, media law counsel for the Pennsylvania NewsMedia Association, said the state’s reasoning appears to be “an overboard application of the confidentiality provisions.” 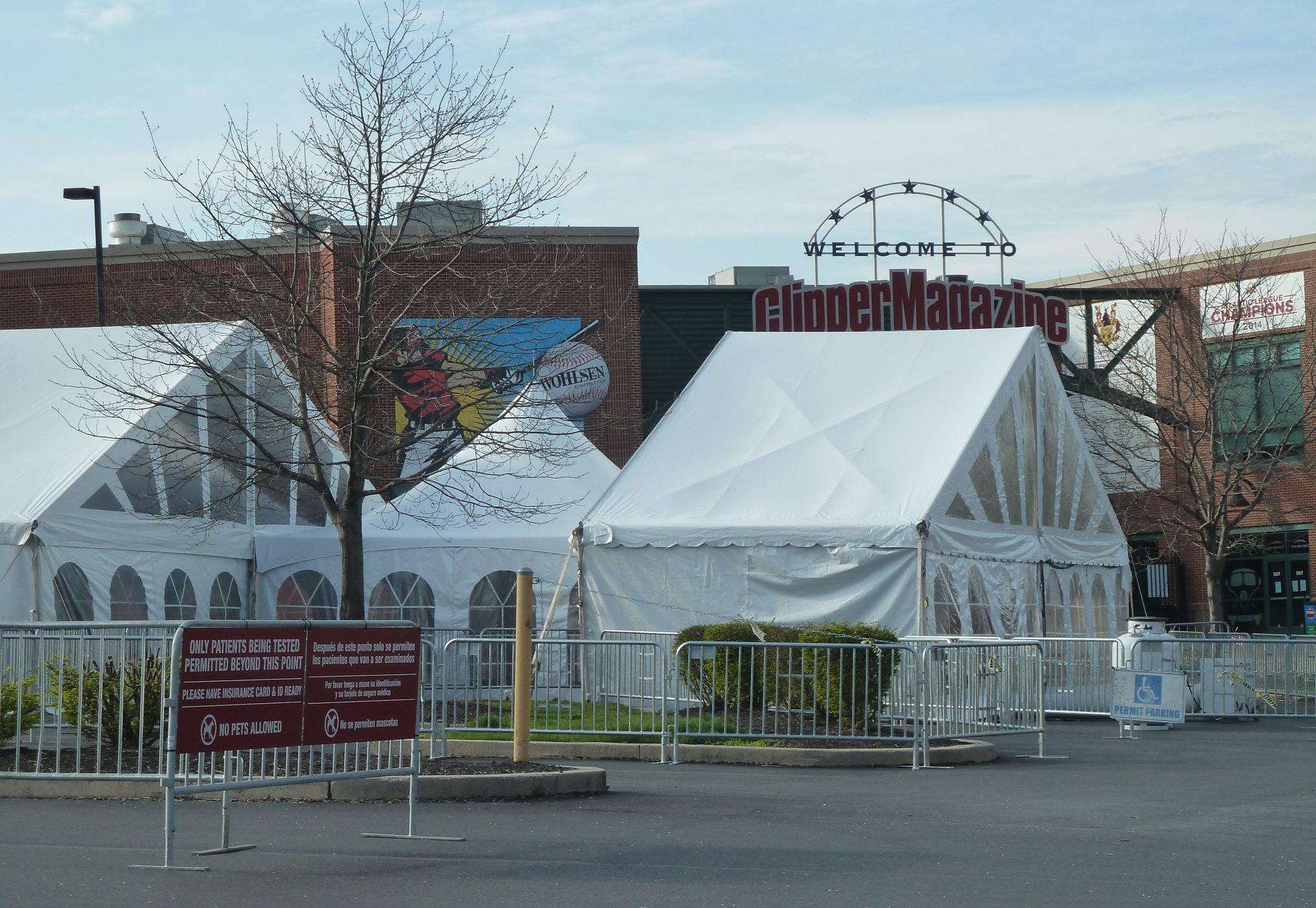 Russ Walker / PA Post. Tents outside Clipper Magazine Stadium in Lancaster, Pa., will be used as a coronavirus testing location.

“I would add that this number, while generic, helps the public understand whether hospitals are complying with the law, and if not, what actions, if any, the Department of Health is taking as a result,” she said by email. “This kind of information provides basic public oversight and accountability, and it is necessary for the proper function of the department and the hospitals it oversees on behalf of Pennsylvanians.”

Wardle did say the department did not reject any plans as insufficient, though it does have the power “to take action” against hospitals that don’t comply.

“However, our goal is to collaborate with health systems and hospitals in their response and to assist with preparations during this difficult time, not to penalize and further burden what they are doing,” Wardle said.

The state has made some preparedness information public. On Wednesday, the department released a dashboard that compiles a list of available ICU beds based on numbers provided by the hospitals themselves. According to that data, some counties could quickly run out of ICU beds if they experienced a sudden increase in cases.

In Lancaster County, 828 people have tested positive for COVID-19 and 24 had died from it as of Monday. There, 38 adult ICU beds were available.

That’s an improvement from last week, said Christian Macedonia, an independent obstetrics physician who works at three of Lancaster County’s hospitals. But with Lancaster’s older population and nursing home communities, those beds still could quickly fill up.

Macedonia has been part of a push among health-care workers and others to set up additional facilities to prepare for a surge in patients. He and others have talked with UPMC Pinnacle about reopening its recently shuttered hospital in Lancaster.

UPMC spokesperson Kelly McCall said UPMC would need “significant” financial assistance from the state and federal government before it could add ICU facilities, either at the shuttered hospital or elsewhere.

“Reopening a closed hospital, or repurposing an existing vacant building to provide safe, effective, and continuous patient care, would be extremely complex,” McCall said. “Significant time, medical supplies, and clinical personnel would be required to open a fully operational hospital.” 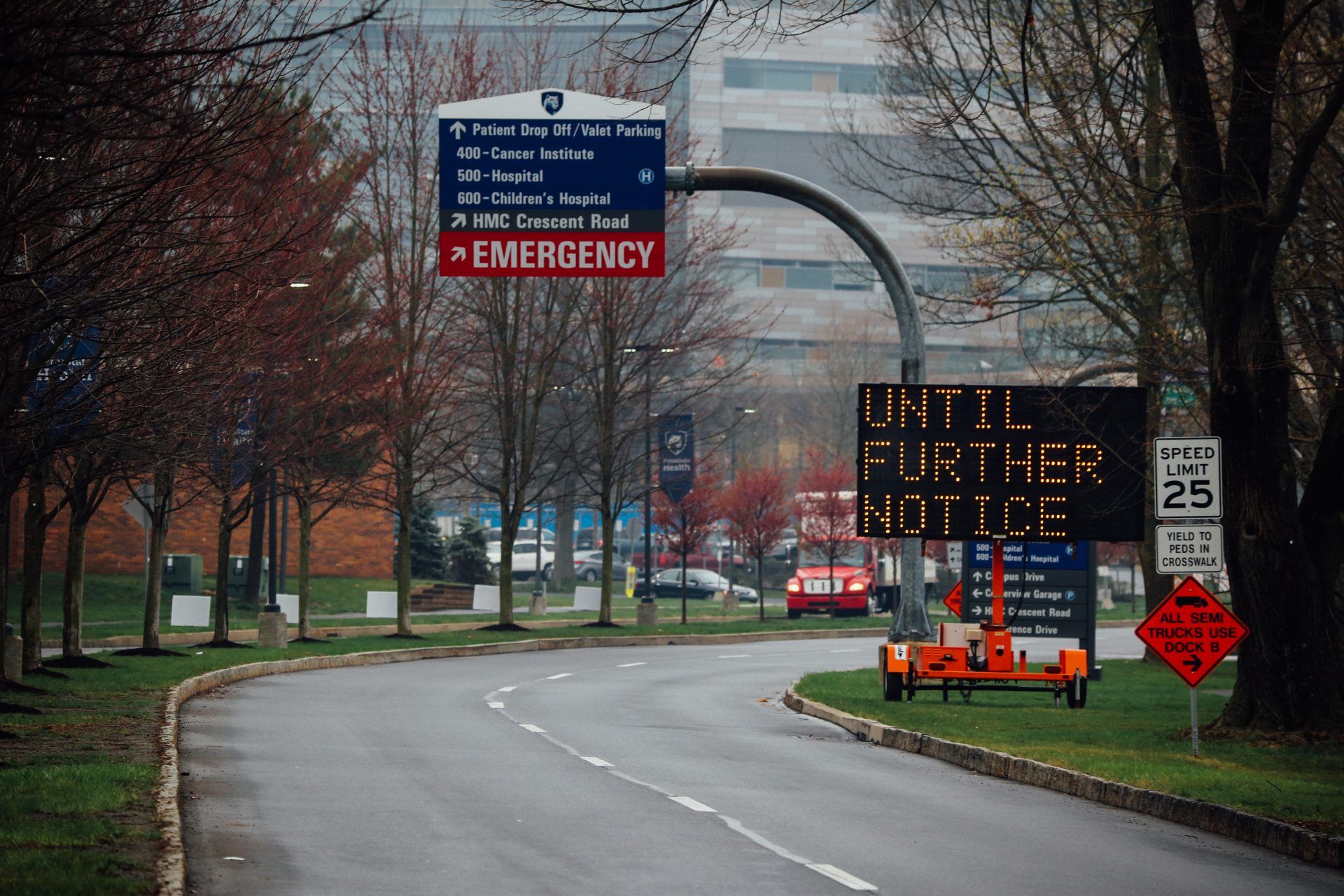 UPMC is not alone in its focus on receiving funding before it acts. The Hospital and Healthsystem Association has focused its public messaging on the need to secure state and federal funding to offset projected financial losses as a result of having to cancel elective procedures. The federal government has allocated $100 billion in coronavirus stimulus funds to hospitals.

“The combination of increased costs and reduced revenue has hurt hospitals financially,” Wolf said. “We cannot let any of our hospitals become bankrupt.”

UPMC declined to provide its emergency plan, but McCall said it was focusing on “maximizing existing resources and capacities in our health systems, building capacity within our hospitals to serve patients requiring hospitalization, and planning for expanded capacity through other resources.”

WellSpan Health, which has a hospital in northeastern Lancaster County, declined to provide its emergency plan, but has committed to doubling its ICU capacity at all of its locations, said vice president and chief operating officer John Porter.

In neighboring York County, the health system has repurposed its surgery and rehabilitation hospital to accept intensive care patients, Porter said. That allows WellSpan York Hospital to focus on patients with critical needs.

WellSpan has also started coordinating plans with UPMC, which recently opened a hospital in York.

Porter said WellSpan hopes to work with UPMC and Penn Medicine in the next week to develop a plan to add ICU beds in Lancaster County as well. Lancaster General Hospital, which is part of Penn Medicine, did not respond to requests for comment.

“Because we’re all going to be overwhelmed, it’s not just one or the other, and we all serve the community,” Porter said.