ROCHESTER, NY (WXXI) – Millions of dollars in past due casino revenue payments may be on the way to Buffalo, Niagara Falls and Salamanca after an arbitration panel ruled against the Seneca Nation of Indians’ attempt to stop the payments.

The panel sided with New York state in its bid for more than $100 million a year in revenue-sharing payments from the Senecas’ three local casinos. 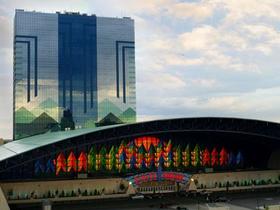 The tribe abruptly stopped making payments to Albany in 2017, saying its revenue-sharing obligation under the 2002 casino compact expired after 14 years. But the three-member panel said Tuesday the obligation to share 25 percent of slot machine revenues renewed with the compact as a whole.

One dissenting panel member, Kevin Washburn, said “the panel’s new provision rewrites the Compact in a way that harms the Nation and provides an unjustified windfall to the state.”

The Senecas shared more than $1 billion before stopping payments, which the state then shared with the casino host cities of Buffalo, Niagara Falls and Salamanca.

Mayor Byron Brown said he is pleased with the panel’s decision, which he called good news for the city.

“It confirms my budgetary assumption of $17 million coming to the City of Buffalo for casino revenue will actually occur,” Brown told reporters Tuesday.

In a written statement, Seneca President Rickey Armstrong says “arbitration panels do not always decide cases on the law.” Armstrong says the nation will take the appropriate time to review and respond to and move forward. He didn’t say whether payments would resume.

Salamanca officials say the city has missed out on around $9 million.

State Senator Robert Ortt (R, North Tonawanda) expressed hope that the arbitration panel’s decision would ease uncertainty for all affected municipalities. One of those cities, Niagara Falls, is included in his district. Ortt says the city brought financial problems upon itself by relying too heavily on casino payments for budgeting purposes. When the payments ceased, Niagara Falls found itself in a deficit estimated at $13 million.

Even the Senecas, he told WBFO, expressed concerns for how the Cataract City was spending its casino revenue. Niagara Falls, according to the senator, gets the “lion’s share of the local share.”

“They don’t feel that money is spent or appropriated in the way it was originally designed, for real economic development, for real job creation, real money going into the community, to downtown, to make the community better,” Ortt said about the Senecas. “They just don’t see it.”

Information from The Associated Press was used in this report.