PENNLIVE — Horse trainers and owners in Pennsylvania are sounding an alarm as the shutdown of live racing stretches toward a seventh week, saying the weight of costs for thoroughbred care without meaningful revenue could crush an industry, its workers and its animals.

Tracks are bustling at 5 a.m. every morning during the coronavirus crisis with workers feeding and riding horses, trainers say. They’re not sure where they’ll find money to continue such upkeep without races.

An online petition asking Gov. Tom Wolf to green-light live racing in the state without spectators in attendance garnered more than 6,000 signatures in about a week.

Horse owner John Julia said he feels the momentum of a desperate community behind the push. One trainer said colleagues are asking to delay mortgage payments so they can continue feeding horses, and some workers on the backside of tracks aren’t seeing paychecks.

The governor’s office halted live racing, along with the operations of casinos, March 16. Julia said other states such as Florida and Oklahoma have enjoyed success running horse races during the pandemic and streaming broadcasts to a virtual audience.

“About 80 percent of the people you would need to put on a race are working at the track every day to give the horses food and exercise, but they still don’t let them race,” said Julia, who owns horses at Bensalem’s Parx Casino and Grantville’s Penn National Race Course. “We’re deemed essential on the backside, but not on the revenue side. And that’s a tough pill to swallow.”

Julia and others in the industry hang onto hope that relief is near.

Wolf announced some aspects of Pennsylvania’s economy will begin to reopen May 8. On Wednesday, Wolf said his office had not yet decided whether it would lift the gates for live horse racing on that date.

“We haven’t determined the final list,” Wolf said, “but [horse racing] is certainly under consideration.”

Trainers and owners are eager to see what Wolf decides, because many are watching their funds dry up. While tracks pay for security at stables, individual owners foot nearly all of the bill for thoroughbred care.

Trainer Michael Catalano Jr. said he receives about $80 to $85 per day from an owner to tend to each of his horses at Parx. After paying for food, hay and vitamins and shelling out money to exercise riders and workers, he remains only a few dollars in the black. Typically, prize money from races would keep him afloat.

Mary Pattershall, another trainer at Parx, said she believes she can continue paying for food and exercise for her horses for only two more weeks without racing revenue. She said owners will have to consider moving thoroughbreds to farms or into retirement if racing doesn’t return by the middle of May.

“I’m afraid to think about it,” Pattershall said. “I don’t know what we’d do with the horses if we can’t pay to keep them trained. They’re athletes; they need exercise. Without it, they get a little too rambunctious in their stalls and get hurt.”

As a self-employed trainer, Pattershall said she can’t file for unemployment. She said some in the horse racing community have discussed the option of going on strike and not tending to horses, but the idea was a non-starter. The horses, she said, must get proper care.

“These aren’t a crate of oranges that you can let go bad if you can’t sell them,” Pattershall said. “They’re animals.” 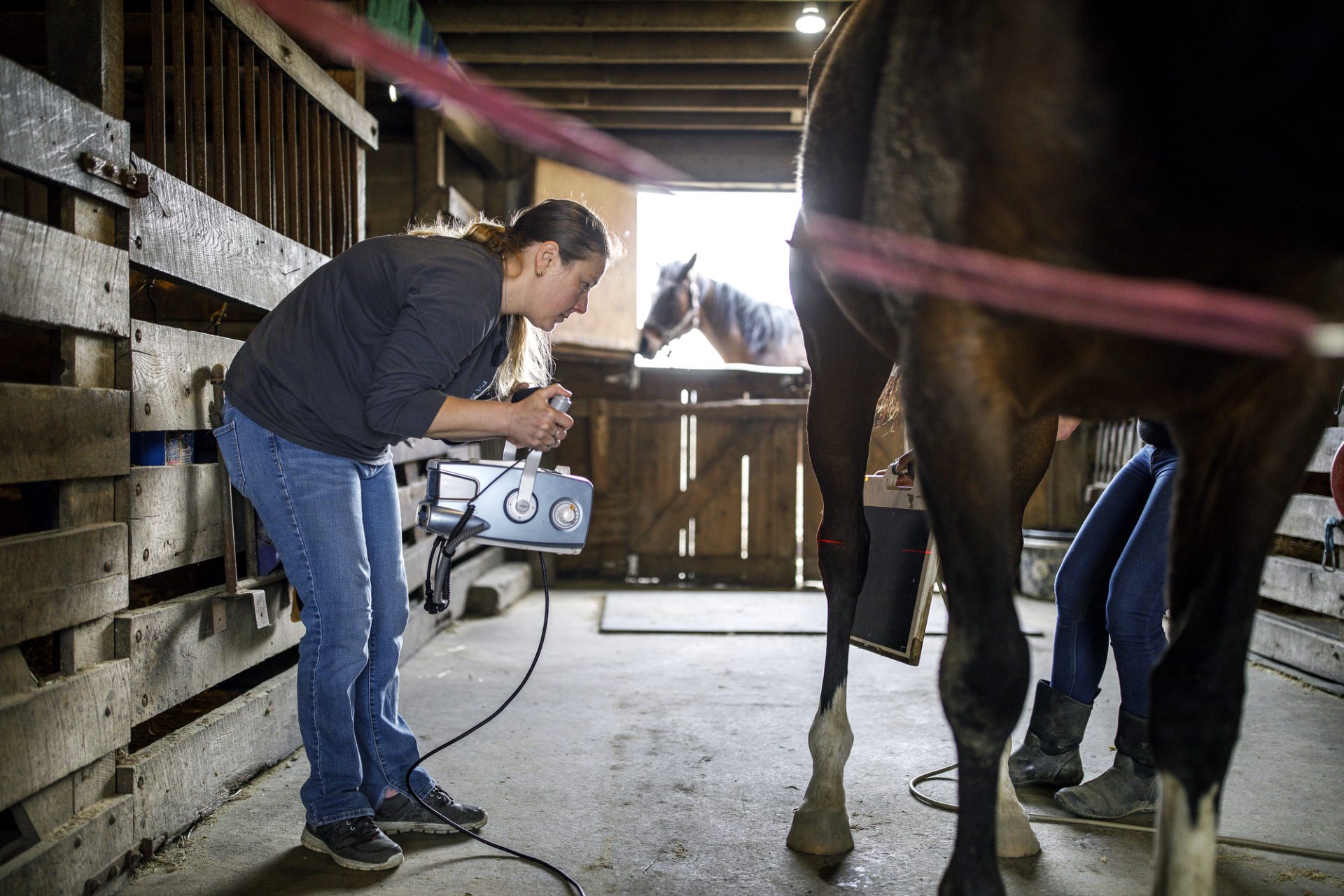 Dan Gleiter / PennLive Registered race horse, Swindler, gets x-rays by veterinarian Kate Papp. The horse was sent to Papp by a horse rescue for diagnosis. Most of the thoroughbreds recover from injury and prepare for their next phase of life after racing after spending time at her non-profit, PA Racehorse Rehoming, Rehabilitation & Rescue, at Hillcrest Meadow Farm in W. Hanover Township. April 18, 2019.

Horse racing has long had its critics. Dozens of thoroughbreds die at Pennsylvania tracks each year, and Penn National has worked to restore its reputation after a doping scandal led to 10 arrests in the past decade.

In February, before the coronavirus upended life across America, Wolf unveiled a plan to divert more than $200 millionfrom the horse racing industry into a fund for scholarships.

Thoroughbred owners, trainers and riders voiced quick and loud opposition. They argued that their industry bolsters the community. Figures from Pennsylvania Horse Racing Association say the sport created more than 7,000 jobs in the state in 2018 and added more than $500 million to the local economy.

Even with the economic downturn hurting state revenues, Wolf has said he hasn’t abandoned his plan to tap money from the horse racing fund. In February, Wolf argued the state has invested $2 billion into the horse racing fund since 2004 and the industry should be able to support itself.

Wolf’s proposal to sap most of a horse racing fund underscores the challenges that the industry faced even before the coronavirus. And if fallout from the coronavirus shutdown pushes horses into retirement or leads trainers to leave their jobs, the sport could struggle to climb to its feet even when the economy reopens.

“Horse racing is the sport of kings, right? That’s the furthest thing from the truth,” Julia said. “The people who are affected by this are needing to decide whether to feed the horses or their families — and that means, nine times out of 10, the families don’t get fed.”

Tony Como, a retiree who owns horses at Parx, said he’s pulling money from his savings account to pay trainers who are desperate for help.

And Catalano said most people he sees at Parx on a daily basis are struggling to make ends meet without live racing. He had to trim his staff of workers from 11 to four.

“We’re calling mortgage companies to tell them we can’t make our payments or asking insurance companies to move deadlines because we have very, very little revenue coming in,” Catalano said.

Strict stay-at-home orders and social distancing guidelines are necessary to lower the death count from COVID-19, according to medical experts. Debates over when and how to reopen the economy have emerged in Pennsylvania and the across country.

Trainers like Nick Canni believe thoroughbred races can unfold with minimal risk. The National Horsemen’s Benevolent and Protective Association laid out an extensive list of guidelinesfor operating during the coronavirus crisis that includes requirements for workers to wear masks and instructions on how to sanitize starting gates.

Julia said restarting horse racing soon would afford an opportunity to attract a wide audience while other sports leagues remain on hiatus, which he believes would infuse money into the industry and generate revenue for the state. He argued that aside from a camera crew and an emergency response team, every person needed for a live race is already working at the track on a daily basis.

While they wait for word that racing can resume, trainers, owners and workers will keep caring for the horses as long as they can, according to trainers and owners who spoke to PennLive.

“Horse racing is unlike any other business,” Julia said. “We can’t just put a closed sign on the door.”