Reimbursement rates for early intervention providers, who work with children from birth to 3 years old, would increase 5 percent under the plan.

That’s a welcome shift, but it’s not enough to stem the local increase in children who qualify for early intervention but cannot find a therapist to provide it, according to Pete Nabozny, policy director at The Children’s Agenda. 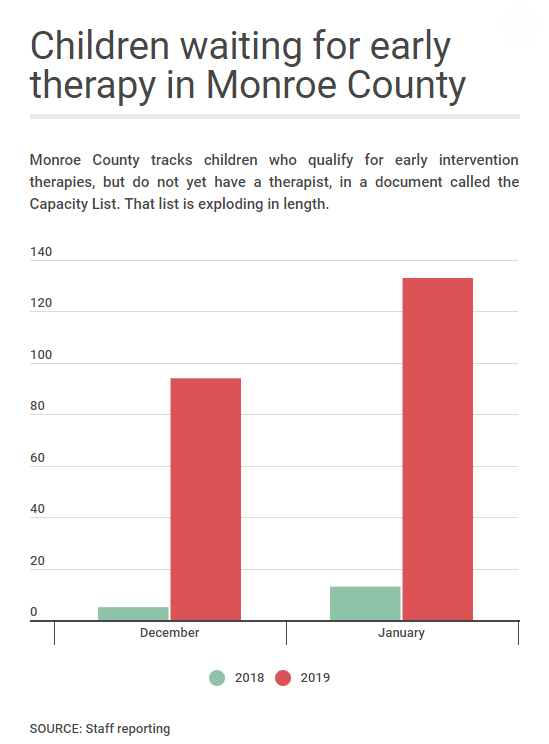 Monroe County’s list of children waiting for services grew more than 900 percent between January 2018 and January 2019.

“It is time for the state to take bold action to secure access to early intervention services for all New York families,” Democratic Assemblymembers Harry Bronson and Jamie Romeo said in a joint statement. They both voted for the proposal, which now needs to be reconciled with the senate’s budget plan.

But Nabozny said the effects of the increase will be modest at best.

“It is something I think we can build on,” Nabozny said. “But we need to be really clear that putting 5 percent into this year’s budget isn’t going to change the reality of kids not getting the services that they need and that they’re legally entitled to receive in Monroe County and elsewhere in the state.”

Nabozny, Monroe County officials and early intervention providers said those reimbursement rates are controlled by the state, and they have not increased in more than a decade.

That’s driven some providers like Catholic Family Center out of business, and it’s making others question how long they can continue operating.

“It’s already a situation where the part of our business that handles early intervention is operating at a loss,” Pia Stampe told WXXI News last December. Stampe runs Step by Step Pediatric Therapy Center in Brighton.

Nabozny said a 5 percent increase in reimbursement rates might stave off closure for some providers who are operating on the brink, but “we’re kind of kidding ourselves” to expect it to encourage new providers to join the field and shorten the waitlist.