Canonsburg, just south of Pittsburgh, is one of the areas where Democrat Conor Lamb and Republican Rick Saccone are fighting for votes. Cheryl Diaz Meyer for NPR 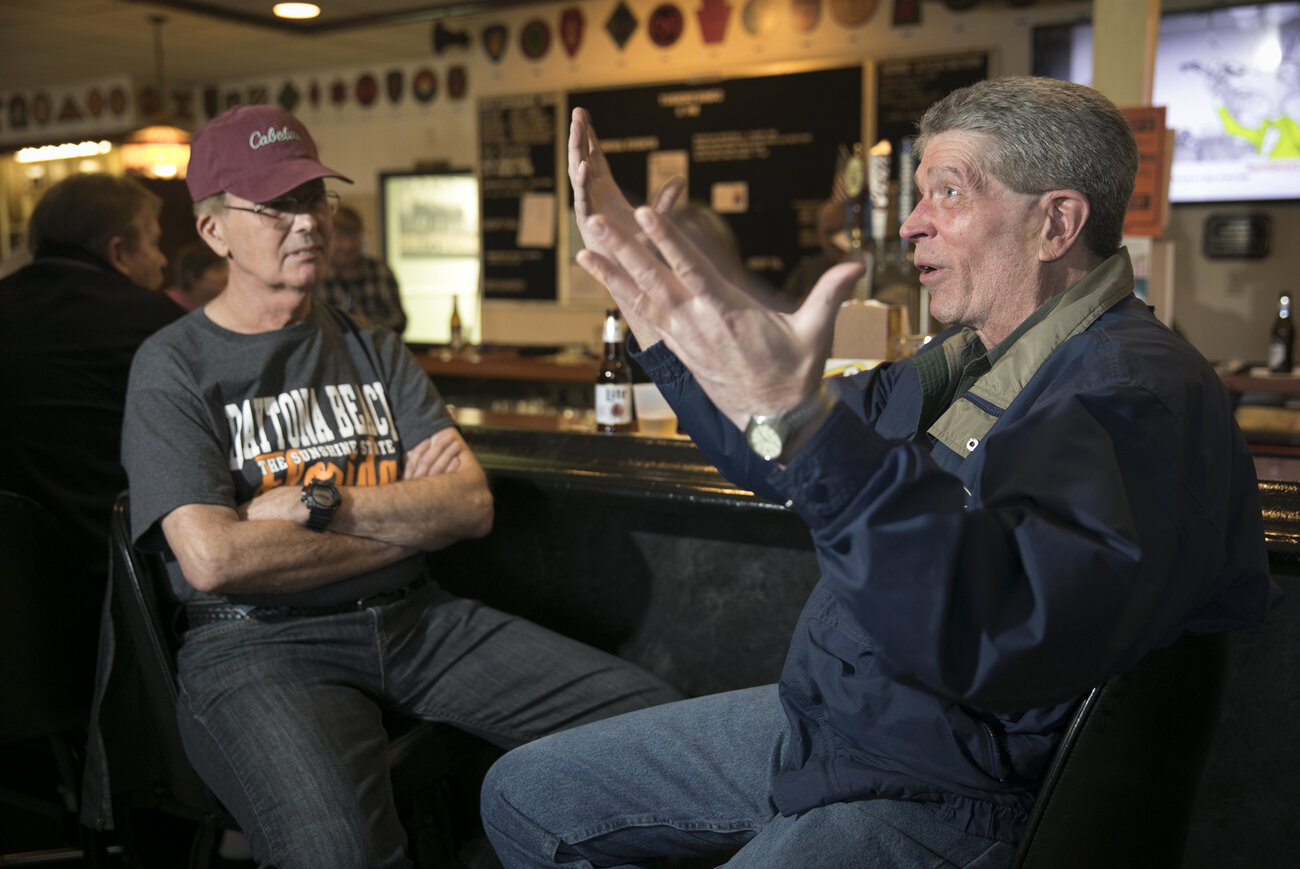 Veterans discuss the state of politics in Pennsylvania at American Legion Post 175 in Washington, Penn., on Feb 28.

Less than two years after Donald Trump won a western Pennsylvania congressional district by double digits, a special election race between a young Democrat and a deeply conservative Republican is now closer than either side had expected. The congressional race is being run in Pennsylvania’s 18th district, but the March 13 election is expected to offer clues about how voters will turn out in the November midterms.

Rick Saccone, the Republican, and Conor Lamb, his Democratic opponent are vying for a seat that opened in October when eight-term Congressman Tim Murphy resigned following a personal scandal. As NPR’s Two-Way blog reported, Murphy allegedly asked a woman with whom he had an extramarital affair to get an abortion.

Murphy’s old district stretches from the mostly liberal suburbs of Pittsburgh, south into conservative, rural areas that are dominated by the energy industry. For more than a decade, Murphy maintained support from across the district, but while this is a regional race, polarized national politics loom large and the two campaigns are using very different strategies to woo voters.

“This race has national implications,” says Terry Madonna, a political scientist in Pennsylvania. “Can Lamb eat into the margins that Murphy won in the past, and of course, the margin that President Trump carried?” That question is especially important to Republicans. A loss in this district would not only be deeply embarrassing for the party, but might show an erosion of support among voters who supported Trump in 2016. 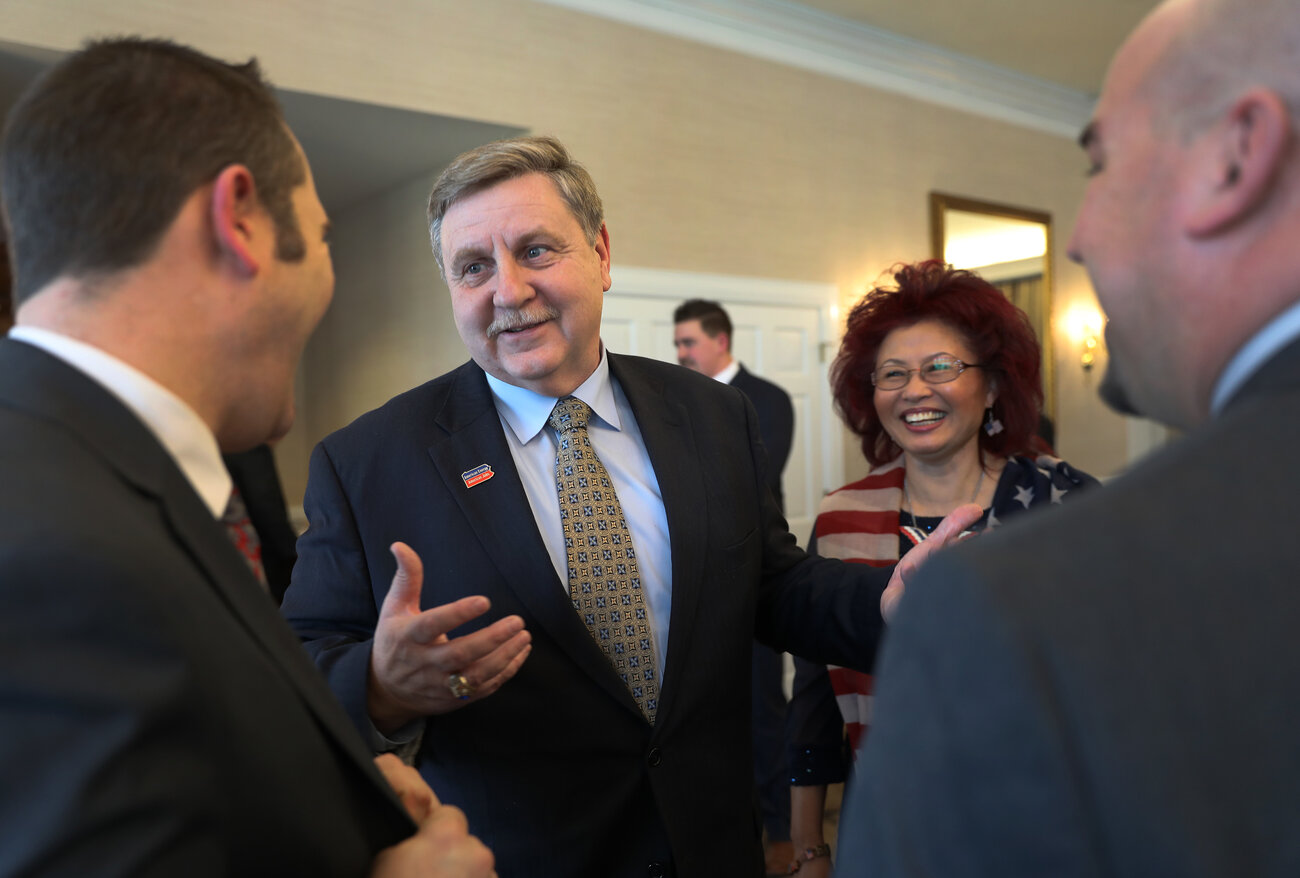 Republican candidate for the U.S. House of Representatives Rick Saccone and his wife Yong Saccone chat with supporters at a fundraiser at Southpointe Golf Club in Canonsburg, Pa., on Feb. 28.

“I was Trump before Trump was Trump”

On a recent Wednesday evening at a fundraising event in a plush country club in Canonsburg, Pa., State Rep. Rick Saccone took the mic and prompted the crowd with a question: “Is this Trump Country?” The answer: loud cheers and applause. That’s good news for Saccone because, as he told WESA in November, he was, “Trump before Trump was Trump.”

It is a comment meant to underscore his conservative bona fides — Saccone spent his tenure in the Pennsylvania state legislature, pushing an agenda that was conservative even by conservative standards. He tried to get public schools to teach the Bible and wanted to make gun owners a protected class against discrimination.

Now, Saccone is promising voters he will go to Washington, D.C. to support the president’s agenda – rolling back government regulations, repealing the Affordable Care Act, and cutting taxes.

“He’s getting beat up, he’s getting some resistance,” Saccone said of President Trump, “He needs some wingmen down there to help him.”

The White House and the Republican Party have pulled out all the stops for the Saccone campaign: The president and vice president have both visited the area. This past week, at that country club fundraiser, Secretary of Labor Alexander Acosta was on hand to stump for the president – and for Saccone. The gist of his message: ignore the media and look at the stock market.

“I’d ask all of you when you go home tonight, check your retirement accounts,” Acosta told the crowd. “That is not a theoretical increase, that is real money.”

Meanwhile, the Republican Party machine and billionaire Joe Ricketts have poured millions of their own money into the race, filling local airwaves with ads attacking Conor Lamb. The Saccone camp seems to be banking on this strategy, take all the help he can get from big donors and politicians, and constantly reminding constituents that a vote for Saccone is a vote for President Trump’s agenda. 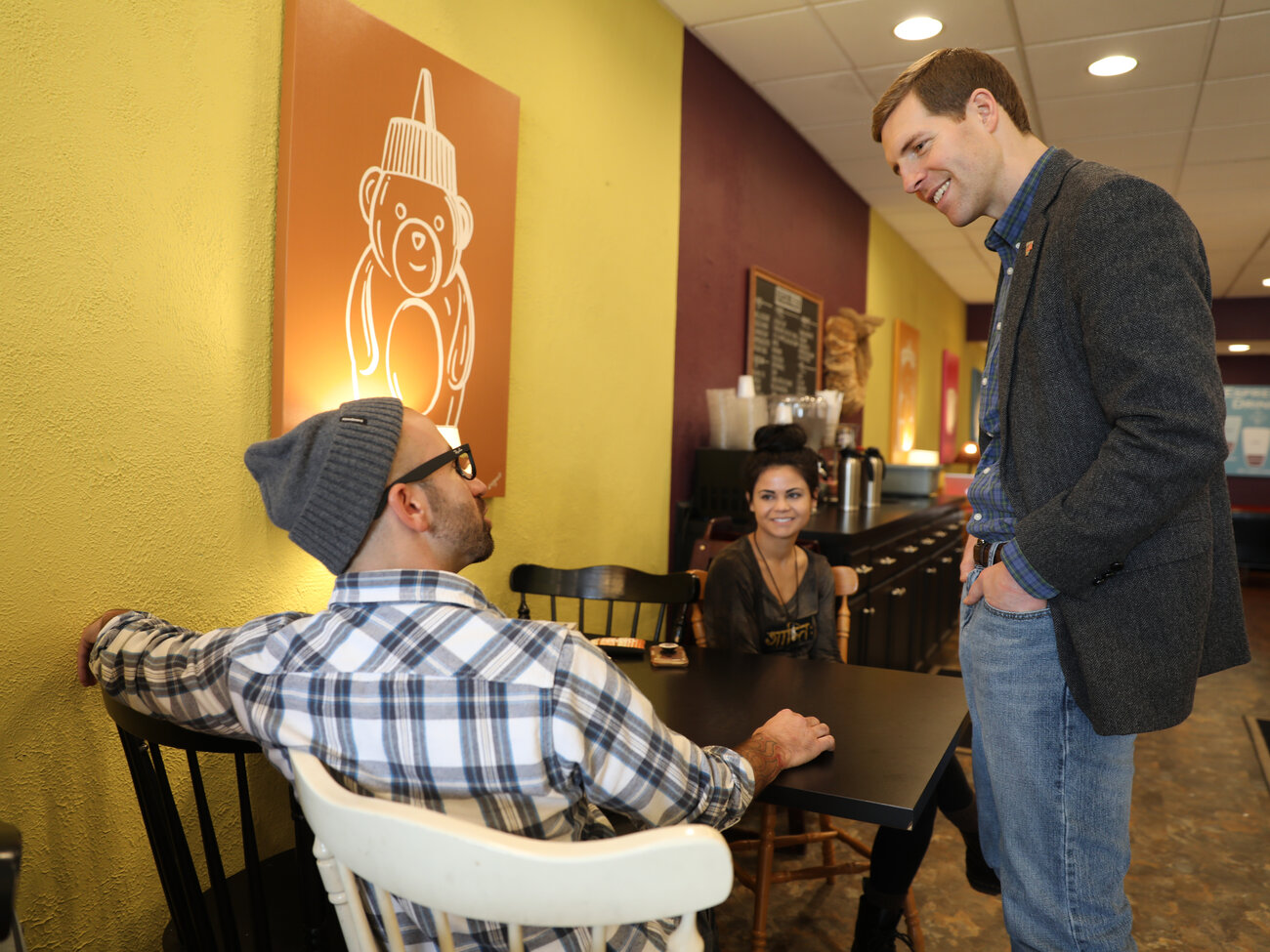 Democrat Conor Lamb, right, chats with Justin Torrence and Chelsea Carbonyl, left and center, while campaigning for the U.S. House of Representatives in Mount Lebanon, Pa., on Feb. 28.

Thirty-three-year-old Conor Lamb comes from a local political family — but this is his first run for office so he makes a daily effort to knock on doors and introduce himself to voters. He tells them about his service in the Marine Corps (Saccone is a U.S. Air Force veteran) and his time as a federal prosecutor. Many voters supported President Trump because he was not a practiced politician; Lamb makes the same case, and tells them he will not accept Beltway gridlock. 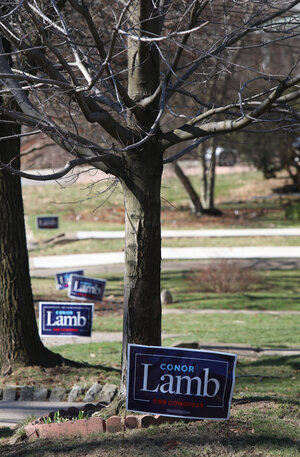 Democratic candidate for U.S. Congress Conor Lamb has signs up in Mount Lebanon, Pa., on Feb. 28.

“I learned a lot becoming an officer in the Marine Corps … one of the things that they teach you is to have a bias for action,” Lamb told NPR this past week. “That requires a certain pragmatism.”

But his untested record in politics has become a talking point for Saccone and his campaign ads. One TV spot plays off the opponent’s last name: “His name is Conor Lamb but in Washington, he’d be one of Nancy Pelosi’s sheep.”

It is a charge the Lamb campaign takes seriously, and part of their strategy is to keep this race local. While Saccone is eager to tie himself to the president, Lamb is just as quick to distance himself from national Democratic leadership, which is unpopular with many voters here. He isn’t taking money from corporate PACs and wants voters to know that he’s a “Pennsylvania Democrat.”

That means appealing to blue-collar workers in the union-heavy state and walking a fine line on sensitive issues like gun control and abortion. Lamb is Catholic and pro-life, but says that is a personal view, not a political stance.

“I’m running for Congress, not cardinal,” Lamb said. “So I support a woman’s right to choose because that’s the law of the land, and I will defend and uphold that.”

If Lamb harnesses the energy of President Trump’s critics, while managing not to alienate conservative Democrats, he could be the first Democrat in 15 years to win this seat.

Dave Ball is the vice chairman of the Washington County Republican party, but he knows that parties only mean so much in this part of Pennsylvania.

“I think that people here are probably more willing than in a lot of places to vote their conscience,” Ball said, pointing to relatively low numbers of straight-party ballots. “It’s an independent place.”

But working class voters will likely not be deciding the outcome of this election, says Terry Madonna who runs the Center for Politics and Public Affairs at Franklin and Marshall College. Those voters generally support the president and Rick Saccone. Madonna predicts Lamb’s path to an upset boils down to one question: “Does he pick up white, college-educated women?”

Women like 70-year old Kyle Tomer, who lives in Lamb’s hometown of Mt. Lebanon. She’s voted Republican for much of her life, but is supporting Lamb in this election and thinks there is excitement around his campaign.

“I think our grassroots around here are pretty effective,” said Tomer. “People that haven’t been interested in politics, especially women — I see them organizing.”

The importance of this race to the national political landscape is reflected in the juggernauts who are coming to the area before the election: There’s Pennsylvania-native Joe Biden, one of the few national democrats whose blue-collar appeal could help a democrat running in a conservative-leaning district. And on the other side, President Trump will hold a rally in the area before the vote on March 13.