SCRANTON, PA (WSKG) – President Joe Biden is working to sell the nation on several trillion dollars of spending on infrastructure — things like roads, bridges and rail expansion, in addition to child care and paid family and medical leave for workers.

President Joe Biden speaks about his infrastructure plan and his domestic agenda during a visit to the Electric City Trolley Museum in Scranton, Pa., Wednesday, Oct. 20, 2021. (AP Photo/Susan Walsh)

Republicans are opposing that plan, criticizing it as too ambitious and costly. Some congressional Democrats are urging less spending as legislative leaders close in on a deal.

He made a pitch for his economic plan in an hour-long speech to voters in his boyhood hometown of Scranton this week. A group of them near where Biden gave his remarks had plenty of thoughts about the kind of infrastructure they would like to see.

Flo Spindler was sitting on a park bench across the Lackawanna River from where the podium was set up for the president’s speech. She said she’s lived in Scranton for six decades, though she’s considered moving away in the last few years.

She said she’s thinking about a fresh start because she’s been homeless for the last few months and relying on the support of the community. An aid group in the city has put her up in a hotel for the time being, and she’s trying to get work to support herself so she can stay in Scranton.

But she said it’s been tough finding the right gig that pays well.

Spindler is hardly the only one who’s had a tough go of it in Scranton. Mayor Paige Cognetti said there isn’t the kind of opportunity that President Biden grew up around decades ago.

Scranton itself is well below the national median income level, though that number has been increasing in recent years. The median salary for a city worker was just over $40,000 in 2019, compared to $62,000 among city workers across the U.S. in the same year. That’s according to an analysis of U.S. Census data and the American Community Survey.

The Census Bureau also estimates the poverty rate in Scranton is nearly double that of Pennsylvania’s.

Cognetti was among those who helped introduce the president before he spoke to supporters Wednesday. Before that, she said she chatted with Biden about turning around the job situation in Scranton by addressing one of the city’s most gaping needs.

“[We need] to repair our infrastructure…to lead on public transportation,” she said. “We [Biden and I] were just looking at the trolleys and he was just thinking about what it was like to ride the trolley. We don’t have that anymore.”

Even the president had to take a second in his speech to supporters to vent his frustration on the matter.

“This is the United States of America, damn it! What are we doing?” Biden said.

Biden tried to make the case that several trillions of dollars worth of infrastructure funding and tax credits contained in a pair of bills on Capitol Hill right now could make a world of difference for cities like Scranton.

Details are still being worked out between Congressional leaders. White House Press Secretary Jen Psaki said conversations between them and the Biden administration this week have been “productive.” 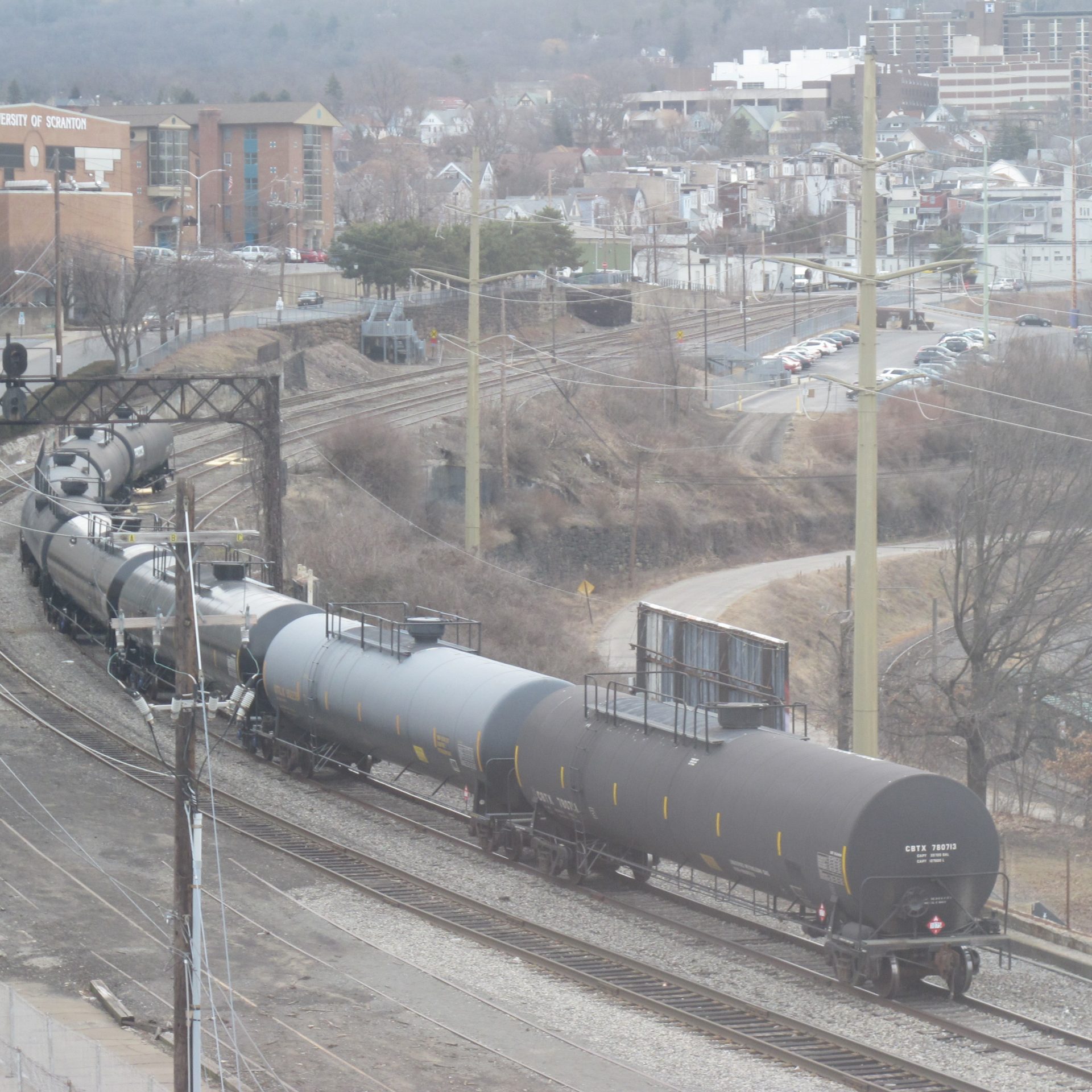 Susan Phillips / StateImpact Pennsylvania. A row of tank cars sit on a siding in Scranton.

Retired restaurant manager Michele Martinez voted for former President Donald Trump last fall, but she agreed money to build up the city would help. She believes Biden’s plan should be laser-focused.

“I think if he could bring jobs here, which are higher-paying jobs [and] bring training here to train people that have jobs that are here, a lot of people would stay here,” Martinez said.

Martinez said her family has a stake in making that happen: her husband works building pipelines. She said he’s been on the job and renting a place outside Pittsburgh for the last two years — because high-paying work like that just isn’t available around Scranton.

“If he could get a decent-paying job here and stay here, we’d only have one mortgage,” Martinez explained. “He might as well stay. Right now, we’re paying $1,800 for our mortgages.”

Scrantonian Justin Howells is living another story: he just found some high-paying manufacturing work, but only after almost six months of looking. He used to work in retail, but doesn’t miss the conditions he had to work in during the last year.

“In the store I used to work at, we weren’t allowed to enforce COVID rules, otherwise we could actually be potentially fired,” Howells said.

Fewer people in Scranton would have to work in those kinds of places, Howells said, if there was more skilled work available.

“A lot of people are struggling for jobs and I feel like that needs to be attacked specifically,” he added.

Biden is promising to bring several billion dollars into Pennsylvania to fix up roads and bridges, and build things like new high-speed rail lines, under the bills being negotiated. The White House also wants Pennsylvania to have a share of $300 billion in extended tax cuts for new clean energy projects.

All that money could bring the kind of work Scranton voters want to see with it — but only if Congress gives it the green light.