President Donald Trump and Vice President Mike Pence landed in their respective planes — Air Force One and Air Force Two — at Fort Drum Monday afternoon for a ceremonial bill signing. It was Trump’s first visit to the North Country since winning his election in 2016.

A presidential visit is a big deal at a military base. As of this Monday, Private Skyler Hensley had only been stationed at Fort Drum for five months. “I can’t believe I was invited to come here,” Hensley said. “This is crazy.”

Soldiers waited in a humid hangar at the Wheeler-Sack Airfield for hours. They noshed on bagels and chips, as their kids got to play inside a Blackhawk helicopter, and fill up on free cookies. 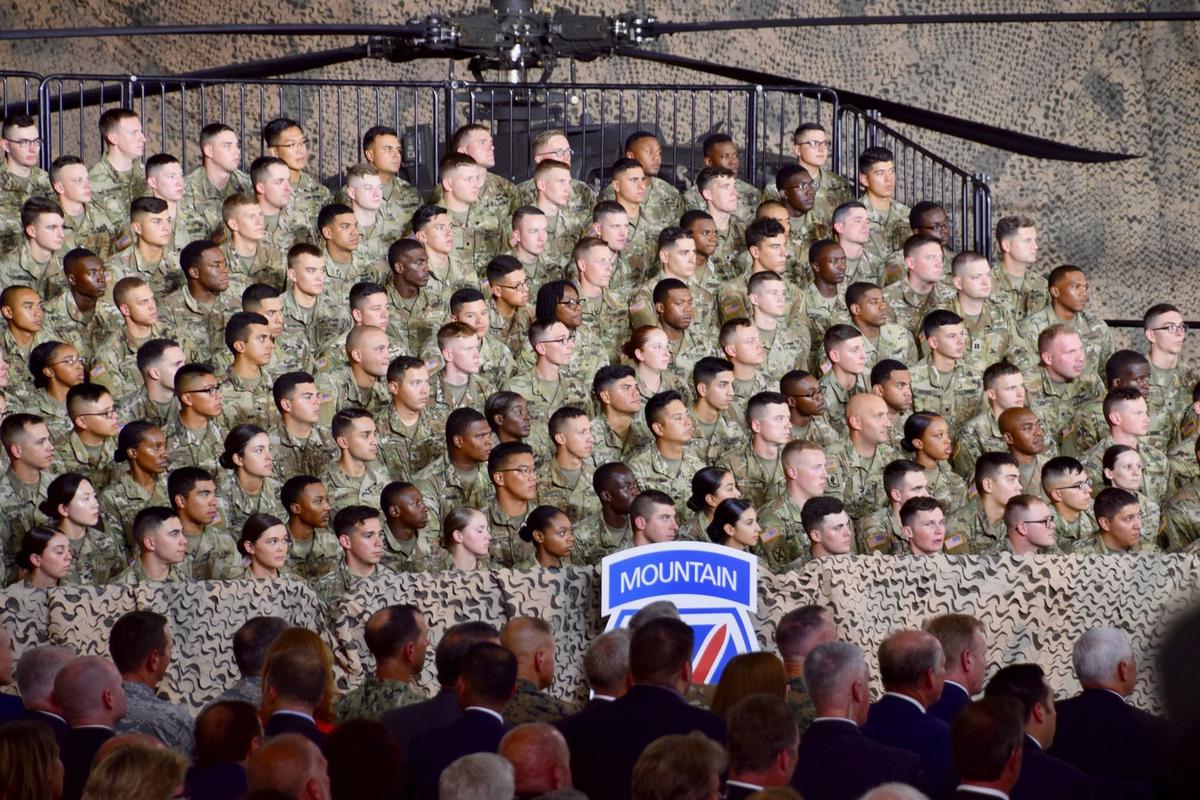 Staff Sergeant Brian Bridge said that regardless of your politics, hosting the signing of the National Defense Authorization Act is an honor. “It’s a small community. It’s a tight-knit community,” Bridge said. “It means a lot to the people of Fort Drum that he would pick here to sign the NDAA.”

A moment for Stefanik and Trump

The president and vice president were greeted on the tarmac by Rep. Elise Stefanik (R-Willsboro), who formally invited Trump to visit the Army base back in March.

Speaking to the roughly 800 military personnel and families who gathered for the bill signing ceremony at Wheeler-Sack Airfield, President Trump called Stefanik “an incredible representative” and said she was the driving force behind his trip.

“I have to tell you about Elise,” Trump said. “She called me so many times. I said, ‘I don’t want to take her call.’ She wanted me to be here. I said, ‘I won’t be able to. We’ll have to change a lot of scheduling.’ But that didn’t suit her. She didn’t stop, and here I am.”

While Stefanik tends to vote with the president’s agenda, she has also criticized some of his signature policies and statements over the past 18 months. But there was no sign of that tension on Monday, as the president asked Stefanik to join him on stage.

“It is truly an honor to welcome you to Fort Drum,” Stefanik said. “Thank you for being here to sign the historic National Defense Authorization Act, which includes the largest pay increase [since 2010], support for our military families, and investing in our military readiness.”

Each year, Congress passes a new National Defense Authorization Act to set military spending levels for the year ahead. The 2019 bill, which President Trump signed on Monday, includes $716 billion in funding for the armed forces and related programs. That’s an additional $24 billion over the current fiscal year. (But if you consider inflation — which is how far a dollar actually stretches these days — funding will drop slightly in 2019.)

President Trump said troops can expect a 2.6 percent pay increase next year. The military will also be allowed to bring on nearly 16,000 additional troops, spread across active duty and reserves. Trump told the troops at Fort Drum that the NDAA will provide access to “the finest planes and tanks and ships and missiles [pause] anywhere on Earth.” Under the new spending plan, the Pentagon is authorized to purchase 77 F-35 fighter jets at a cost of nearly $7.6 billion, among other aircraft and equipment.

Finally, Trump said the bill new lays the groundwork for his proposed Space Force, which would be a new, sixth branch of the armed forces.

“Our foreign competitors and adversaries have already begun weaponizing space,” Trump said, adding that communications systems and satellites may be a target. “They’ve given me rundowns. I’ve seen things that you don’t even want to see — what they’re doing and how advanced they are. We’ll be catching them very shortly.”

The 2019 NDAA passed Congress with bipartisan support, although New York Senator Kirsten Gillibrand, a Democrat, voted against it. The bill is officially named after Arizona Senator and longtime Republican leader John McCain. But none of the speakers at the bill signing — President Trump, Vice President Mike Pence, or Rep. Stefanik — mentioned McCain at all.

In Watertown, protestors push back

While the bill-signing event was closed to the public, critics of President Trump and Rep. Stefanik gathered at Public Square in nearby Watertown. Protestors held up signs and solicited honks from passing cars. 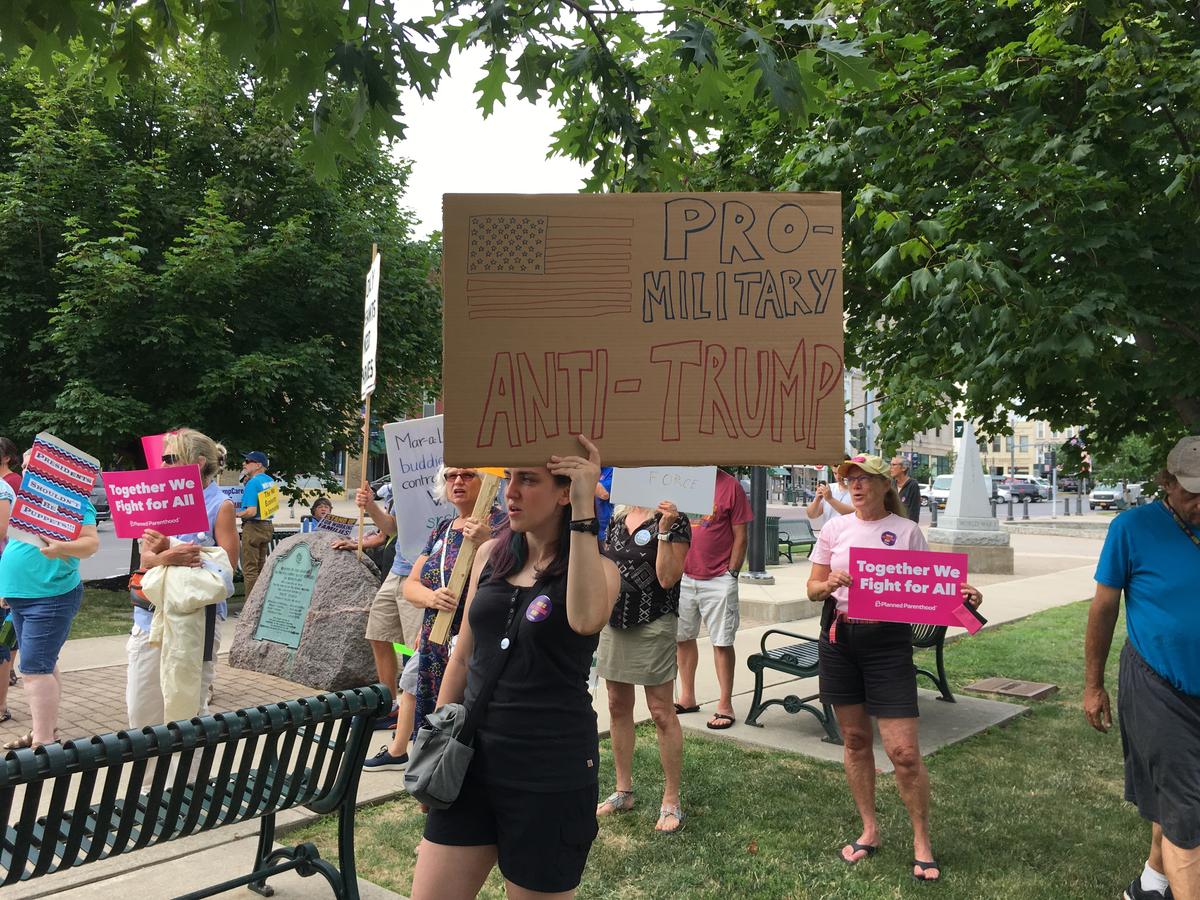 Amanda Glidden is an Army spouse who lives in Watertown. She said Trump doesn’t know what supporting the military really means.

“His idea of support for the military is to spend a bunch of their money throwing parades in his own honor, which is something a dictator does, not something a president does,” Glidden said. “A president supports his military by making sure that veterans are taken care of, making sure that mental health issues are brought to light, that suicide prevention is supported. None of those things are what’s important to Trump.”

The 10th Mountain Division has been the most-deployed in the Army since 2001. Fort Drum’s headquarters is in the process of returning from Iraq. President Trump said that pace wouldn’t ease: The 2nd Brigade Combat Team will be heading to Afghanistan later this fall.

After his remarks at Fort Drum, Trump traveled to Utica for a fundraiser for Rep. Claudia Tenney (R-New Hartford). That event drew nearly 2,000 people to the area near the Hotel Utica, where the fundraiser took place.