SYRACUSE, NY (WSKG) – New York anti-war protesters are taking aim at a defense contractor with offices in the town of Salina.

The suburban Lockheed Martin facility is the focus of these protesters carrying signs accusing the company of having blood on its hands. Ariel Gold of Ithaca said a recent Saudi bombing using U.S. made weapons has prompted this gathering. 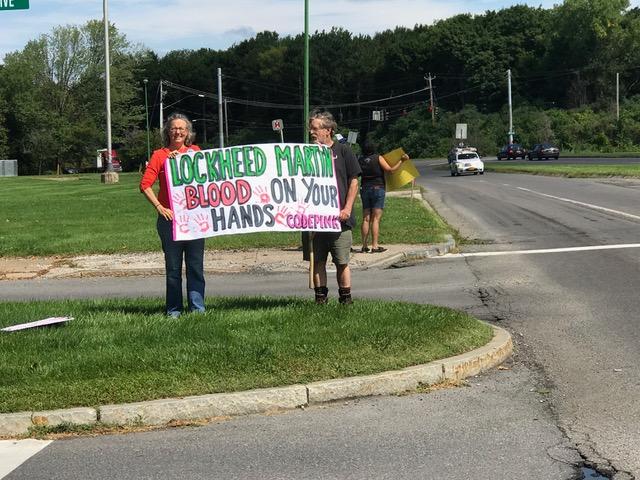 “They profit from such things as this recent massacre of 40 children on a school bus in Yemen and it was  Lockheed Martin weapons,” Gold said. “We’re here to say no more.”

Gold said the the ultimate goal is to divest from a war economy.

“We want to see local peace economies instead profiteering from war and death,” Gold said. “That’s why we’re out here. We’re tired of Lockheed Martin making a killing off of killing.”

Ursula Rozum of the Syracuse Peace Council said it is important that central New Yorkers know what companies in their midst are doing.

“They’re making billions off weapons sales to countries that are using them to kill civilians,” Rozum said. “We think the Syracuse community should know this and they should be concerned about what could be happening in our own backyard.”

Rozum said the group is also calling for an end to U.S. arms sales to Saudi Arabia.

A spokesperson for Lockheed Martin declined to comment on the protest.