SYRACUSE (WRVO) – Protests outside of central New York Republican Rep. John Katko’s Syracuse office have been ongoing this week, including a rally on gun control. Following last week’s high school shooting in Florida, some of the protesters were teachers who said Katko is doing nothing to fix the problem.

“I want chalk, I want paper, and I don’t want a gun,” Oppedisano said. “I don’t want to spend any time or effort doing the job of protecting my children from something they should not have to be afraid of every single day.”

She was allowed to come inside and present Katko’s staff with an oversized check for thoughts and prayers, made out to the congressman.

“Thoughts and prayers because that’s really pretty much all he has offered,” Oppedisano said. “Nothing in terms of solid policy proposals, and in fact, his policy proposals have been antithetical with regard to keeping our students save in schools.” 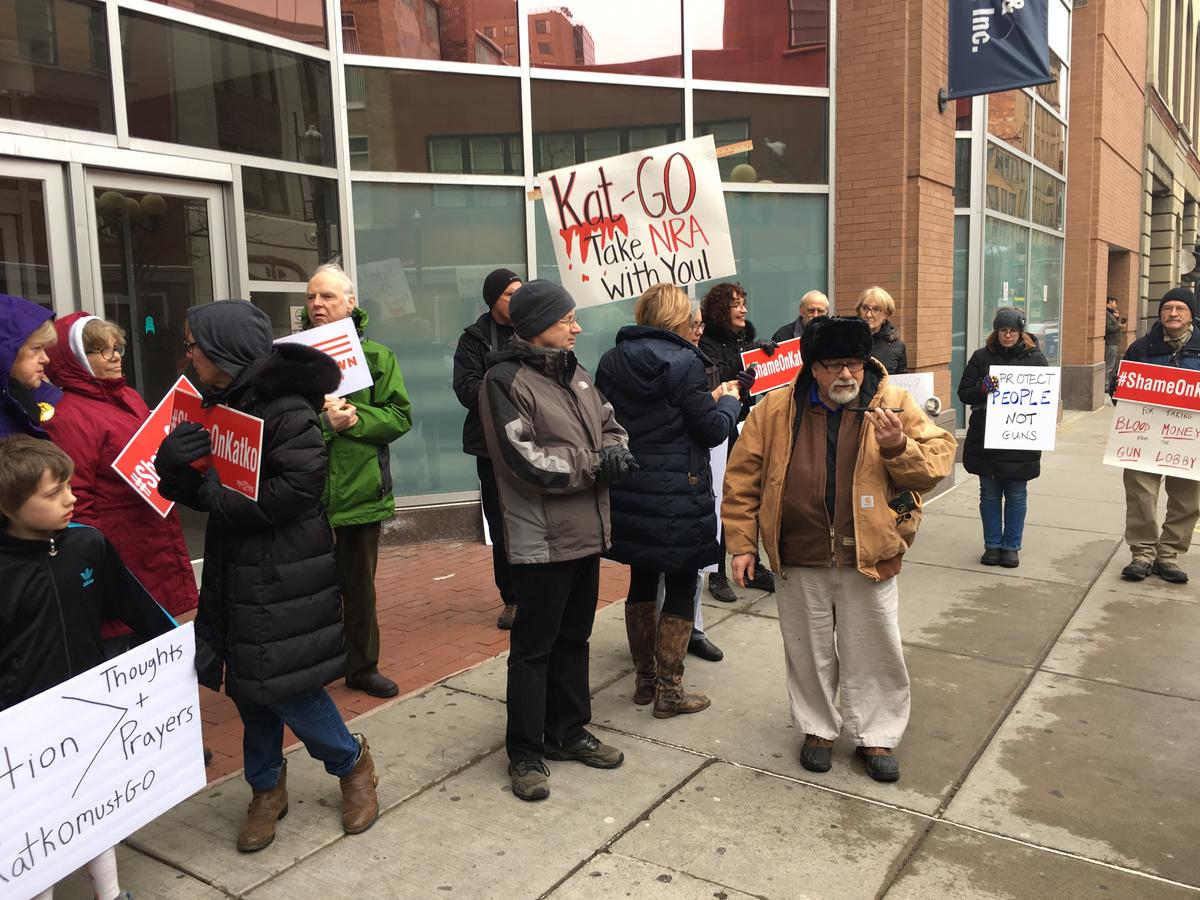 Protesters opposed Katko’s vote in 2017 to repeal a rule that made it more difficult for people with severe mental illness to buy a gun. But supporters of that repeal, including the American Civil Liberties Union, say the previous rule violated the due process rights for some people.

Jude Timmins of Skaneateles is a retired teacher and said she wants Katko to stop accepting money from the National Rifle Association. In the last election cycle, Katko received more than $9,000 dollars from NRA backed groups.

“I’m not against guns, people should have their guns,” Timmins said. “But there has to be some kind of legislation to protect students.”

She was joined by her husband Mike Timmins.

“My wife being a teacher, she is very intersted in marks,” Mike Timmins said. “She would love to see John improve his mark that he has with the NRA. He’s getting an ‘A,’ we’d like to see him get a nice ‘F.’”

Katko, in a statement after the shooting last week, said more needs to be done to keep guns out of the hands of individuals suffering from mental illness. He said Congress’ inaction is unacceptable and he said he is willing to work alongside Democrats to find bipartisan solutions.

As the father of high school aged children, I am heartbroken and devastated by the tragic shooting in Florida yesterday. When a parent drops his or her children off at school in the morning, their safety should not be in question.

Gun violence has decreased dramatically nationwide, yet, the number of mass shootings continues to rise at an alarming rate. The common thread in most, if not all, of these instances is mental illness. During my time as Central New York’s Representative in Congress, I have become increasingly frustrated by the level of discourse that has unfolded in the wake of these horrific shootings and the failure of Republicans and Democrats alike to produce meaningful, bipartisan reforms.

We need to have conversations that may make both sides of the aisle a little uncomfortable, and I’m willing to lead that effort. To start, I’m working alongside my colleague Rep. Grace Napolitano and the Mental Health Caucus to examine, in a bipartisan fashion, the correlation or non-correlation between mental health issues and mass shootings so that we can keep our communities safe.

Before coming to Congress, I spent a 20-year career vigorously and routinely enforcing our nation’s gun laws and keeping firearms out of the hands of the wrong people. Now, I’m making it my priority to continue that fight in Congress. We have laws on the books to ensure guns do not get into the hands of criminals, but it is far past time that we do more to keep guns out of the hands of individuals suffering with mental illness.

The inaction in Congress to date is unacceptable. I’m hopeful that our efforts will begin a productive and bipartisan dialogue that will yield real reforms.