ROCHESTER, NY (WXXI) – Richard Brookins died last Thursday at the age of 96.  He was a WWII veteran but his impact as a soldier is perhaps best known for the impromptu decision to have him dress up as Saint Nicholas on December 5th, 1944, bring smiles to the children of the small Luxembourg Town of Wiltz.

Brookins spoke  to WXXI News three years ago about the effort to bring some hope to that war-ravaged town in 1944, wearing a crudely fashioned St. Nicolas costume, riding through the town on an Army jeep, and passing out treats.

“We had as much fun as the kids, the kids loved it, the townspeople thought it was wonderful and I remember then telling me, the children were very happy as everybody was and they would never forget, and she said, neither will we,” Brookins told us. 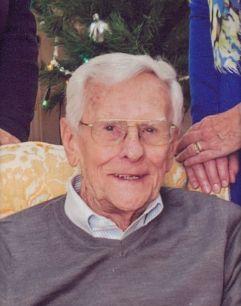 And they didn’t forget, with the Town of Vilts holding a ceremony every years since the late 1940s. Tim Gray is the founder of an organization called the World War II Foundation, which tells personal stories of those who fought in that war.

He also produced a documentary called The American St. Nick, which was released in 2015 and as part of making that film he went back to Luxembourg with Dick Brookins several years ago for one of those ceremonies remembering the events of December 5, 1944.  He  says Brookins was treated like a celebrity.

“He loved the people in that town and they’re still people alive who were children who remembered the actual parade and Dick Brookins taking part of it and they would come up to him and they would grab him and hug him and be crying and touch his face, they just wanted to thank him,” Gray told WXXI News as he remembered Brookins.

Gray says the Town of Wilts will have a special ceremony in December marking the passing of Dick Brookins, and he says with the 75th anniversary of that annual celebration to remember what Brookins and his fellow GI’s did during the war coming up next year, as well as the 75th anniversary of the Battle of the Bulge, there will be a special ceremony in 2019 to honor the Rochester area man known as the American St. Nick. 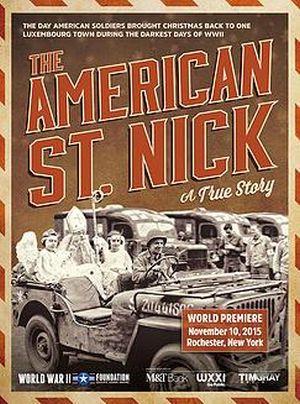 Brookins worked with Rochester Telephone for 36 years; he also did work at WXXI’s Reachout Radio, a news service for  people who are unable to read standard print due to vision loss or physical disability.

His funeral will be held Wednesday, 11:00 a.m. at All Seasons Chapel at White Haven Memorial Park. You can find more details about his memorial here.

This is a trailer from the World War II Foundation about the film, ‘The American St. Nick’