BUFFALO, NY (WBFO) – Republican county chairs from across the 27th Congressional District say they have three weeks to decide who they want to replace Congressman Chris Collins on the November ballot.  They spent much of Tuesday huddled at Batavia Downs discussing the issue and hearing from nine potential candidates. 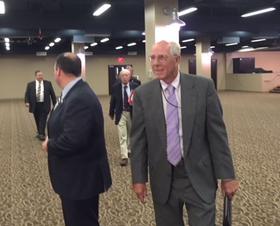 “No one is more frustrated than the people standing here right now. Because, again, we don’t choose to be in this situation,” said Erie County Republican Party Chair Nick Langworthy. “We’re going to take our time, do the job that we need to do.”

Nine candidates made their way to Batavia to discuss the possibilities. Five of those interviewed are on the ballot for State Legislature races, potentially threatening GOP control of the State Senate.

Reelection is not an issue for Erie County Comptroller Stefan Mychajliw who has been outspoken of his desire to run in the 27th district.

“I made a very strong case of why I should be the candidate. And, it’s their decision. I respect it,”  Mychajliw said.

“These chairs are in a really tough spot. They didn’t ask for this. This was totally unexpected. They are doing a very great job under very difficult circumstances.”

The chairs have until the seven days after the primary election September 13 to get Collins off the ballot and replaced. That effort, however, is likely to face a legal challenge from the Democratic Party.

Monroe County Chair Bill Reilich has some experience in dealing with the complexities of these cases.

“In our county, we had an assemblyman (Bill Nojay) that passed away, close to the election and he won the election,” Reilich recalled.

“So, it’s not like it hasn’t happened before where somebody who for whatever reason is no longer intending to run, gets elected. It’s happened.”