The only thing separating the Myrick's home from Lake Ontario is a man-made dune and a few sheets of plywood. CREDIT VERONICA VOLK / GREAT LAKES TODAY

GREAT LAKES TODAY – Water is being let out of Lake Ontario at record rates, but it’s doing little to relieve high water on the south shore, in New York. Last year, flooding caused millions of dollars in damage to residences and businesses, and in some areas drove people from their homes for months.

One neighborhood in Hamlin, New York, was hit particularly hard. Now, residents there say they fear another harsh flood season.

Bobby Jones stands on a sandy beach looking out over Lake Ontario. Small waves are crashing against the shore, just a few yards from his summer cottage – but he’s seen much worse.

“This lake can change on you on a dime,” he says, watching the waves. “You need to respect the lake.”

His neighborhood is surrounded by water, thanks to a creek that separates it from the Lake Ontario State Highway. And there’s just this beach, instead of a hardened shoreline.

Jones points out the break walls jutting from the properties of his neighbors to the west.

“I’m the first one with nothing.” 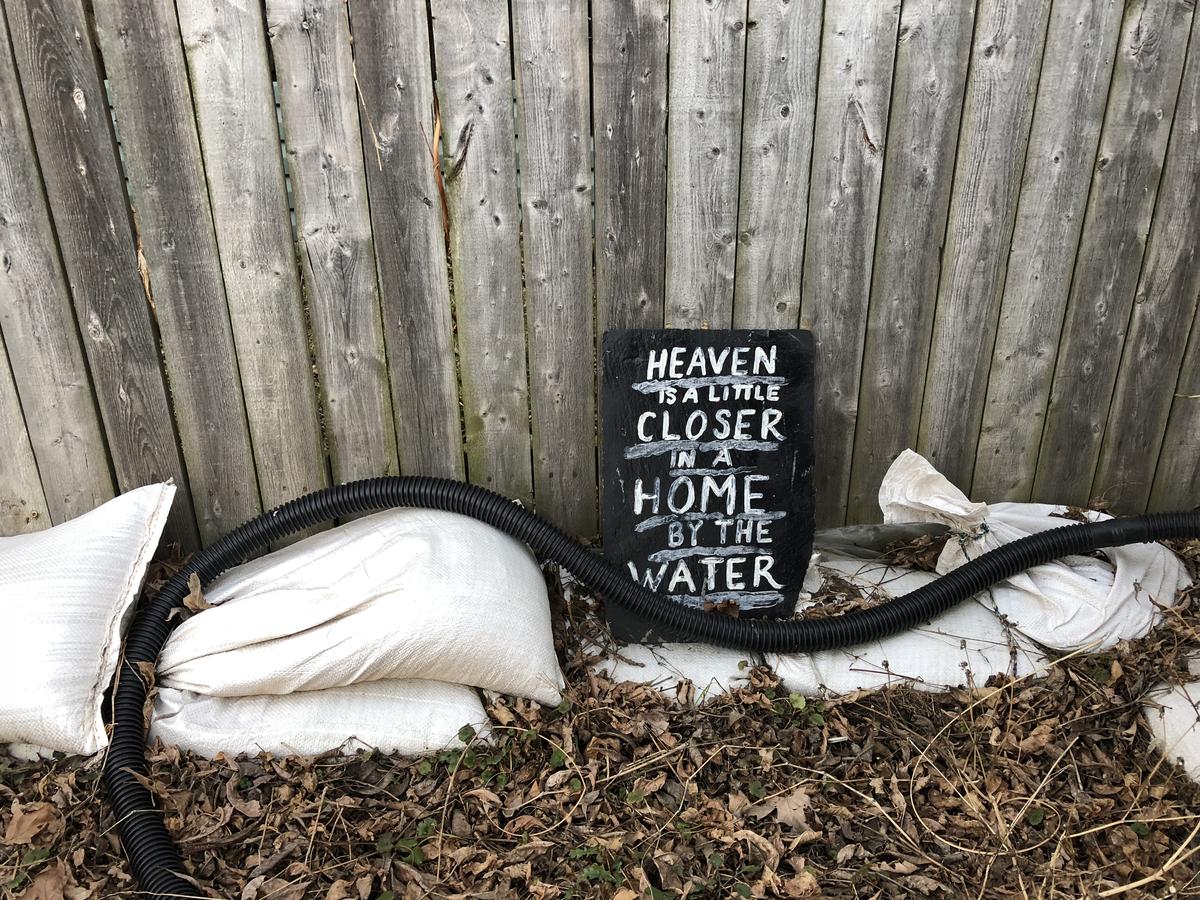 Jones bought this little cottage in 2012. And two years ago, he spent his retirement savings on the property just behind it, where he built a house to live in full-time with his wife, his daughter, his cat and his three-legged dog. It’s across a narrow street, but has a great view of wetlands from the back deck.

“We have a set of swans over here that come and say hello to us and they were always a joy to have” he says. “But this year they won’t be here with the way things are.”

This is the way things are: right now, Lake Ontario is almost a foot above its average height for this time of year. Jones worries this is just the beginning.

Last year, high water in winter gave way to devastating floods in the spring, across New York and the Canadian province of Ontario.

Since then, Jones says he hasn’t been able to build any protective structures on his property. And he feels vulnerable to another flood season.

“Because this is a flood zone and wetlands, they’re not allowing you to do that,” he says, referring to building structures to protect his home. “But, they let me build here.” 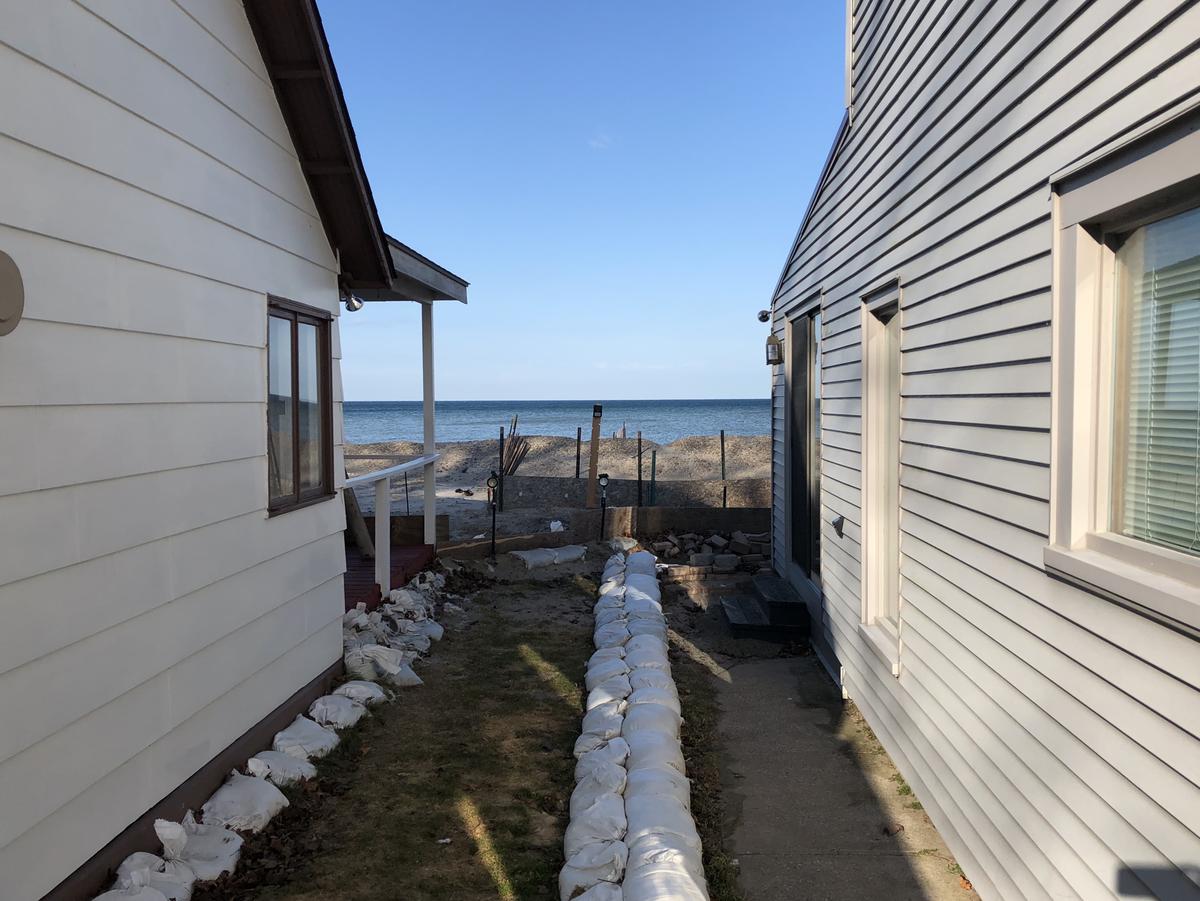 The only thing separating the Myrick’s home from Lake Ontario is a man-made dune and a few sheets of plywood. CREDIT VERONICA VOLK / GREAT LAKES TODAY

Down the street, Carol Myrick and her husband are also concerned about flooding. They live on the lake side, and their property line is too close to the house to allow them to build a break wall. Last year water came into their house, cracked their foundation, and broke their septic system.

“I’ve lived on the lake my whole life,” Myrick says. “I would probably put up with anything but I don’t know what I’m going to do if this happens again.”

The level of Lake Ontario is controlled by downstream dams, and some residents say a change in government policy brought higher levels and last year’s floods. But scientists with the Army Corps of Engineers say, with record spring rains, there was simply too much water to handle.

Scientists point to climate change as a catalyst for these higher levels. Temperate winters and wet springs fill the eastern Great Lakes – Erie and Ontario – with water.

And Keith Koralewski of the Army Corps says current conditions do not necessarily promise a repeat of last year.

“Levels that we see during this time of year do not provide any indication of what lake levels will be in April, May or June,” he says.

For levels to return to normal, Koralewski says the region needs an extended dry period.

But NOAA forecasts a 40% chance of higher than average precipitation in April, May, and June.

In the meantime, Myrick and Jones and their neighbors all along the shore are hoping for the best, but also, expecting the worst.